Skip to content
Home→Archaeology, History, Military History→You just never know what the next signal might be! By Keith Brown

You just never know what the next signal might be! By Keith Brown

For those that haven’t seen it, I thought you might like to hear about a special gold metal detecting find I made just after I started metal detecting  – It’s certainly something that I’ll never forget.

To set the scene, I was the proverbial newbie and this was my first ever permission that I’d secured from a guy I know. He lived outside Dorchester in Dorset, just off the Yeovil road… he was a bass player in a band and his land consisted of just two very small grass fields. When he gave me permission I remember he laughed and said “you’ll find now’t in those fields except rubbish… and that’s even if you can get your shovel in the ground cos it’s full of flint!”

Being a musician he said he’d held many live band parties on his land over the years i.e birthdays, anniversaries and get-togethers, so I was warned that foil, bottle tops and ring pulls would be everywhere… Oh… as well as the flinty ground to contend with!

For my part I was just grateful that I had somewhere to go and, as I was still getting to grips with my new Deus detector, it had to be worth the effort I thought.

So… on the 2nd Jan 2017, on an absolutely freezing cold day, I walked onto the field, turned on my detector and off I went.

Hour after hour went by and I’d found nothing except the rubbish he’d previously warned me about…  I was very cold and started to feel dejected. I then stopped for lunch to thaw out in my car with a flask of hot soup before going out again for round two… “surely I’ll find something historical at some point” I  thought.

However, the lack of decent finds continued right through the afternoon and, as it was starting to darken, I decided I’d had enough. My feet and hands were going numb with the cold… it was time to call it a day…  and it was then I got a faint but diggable signal.

I reluctantly turned on my old Smartphone and started recording “just in case” this target I was digging up was something other than rubbish. When the find first appeared covered in mud I saw its flat base and thought it was another gold-coloured bottle top… then I saw glimpses of shiny metal showing through and thought maybe it was made of polished brass… and when I saw the whole shape of it I thought it was possibly the finial of a walking cane! I was wrong on all three counts though…it turned out to be something much better than that! 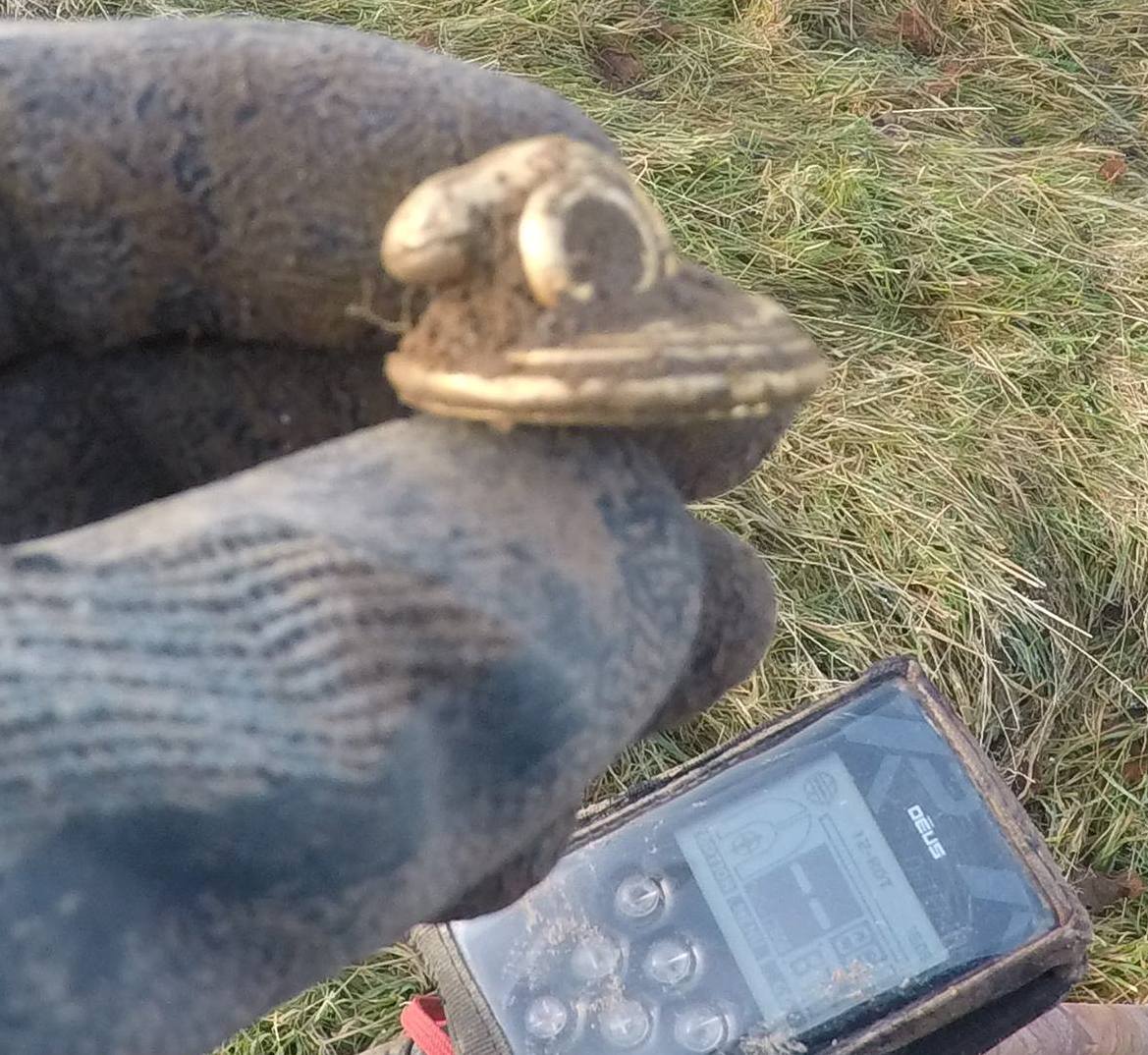 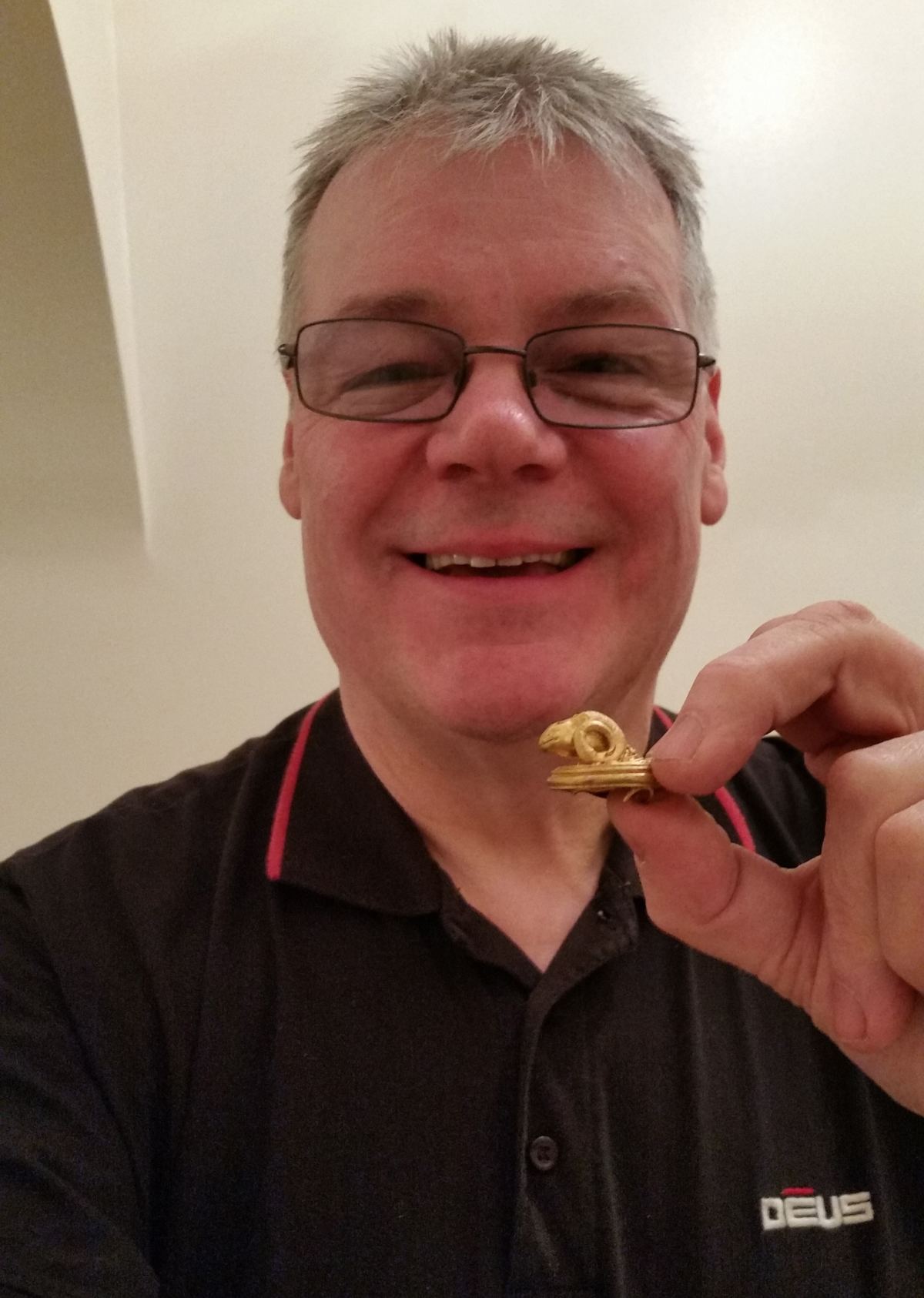 I knocked on the landowner’s door and said “Put the kettle on… I’ve got something to show you”. I rinsed the remaining mud off my find and there it was.. a solid gold Ram’s Head Brooch and, although damaged, it was oozing quality and stunning craftsmanship, it was simply beautiful.

As it had no hallmarks I declared it as a “potential” treasure find and handed it to my local FLO and off it went to the British Museum.

Fast forward a year from that day and I eventually got the brooch back from the British Museum and, due to popular request, I then posted an updated video about the outcome on my YouTube channel. To see the brooch close up and find out more, have a look at the video below.

Thanks to Keith Brown (YouTube channel HOPEUS MAXIMUS) for submitting his article. If you would like to include any of your stories or finds on the site or in future printed editions of the magazine, please get in touch at editor@archmdmag.com