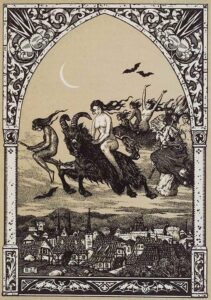 Walpurgis Night, also known as Walpurgisnacht in German, is a holiday which occurs on April 30th in different parts of Europe. It is a holiday that is named after Saint Walpurga and is a day that dates back to ancient pagan fertility rites. It is mainly celebrated in Germany, Sweden, and Finland. However, there are variants of this holiday which are also celebrated in the Czech Republic, Estonia, Slovenia, Latvia and Lithuania.

Walpurgis Night can be traced all the way back to pagan Norse celebrations in Northern Europe and Scandinavia that were practiced for thousands of years before the arrival of Christianity. On this day, people would hang foliage sprigs around their homesteads and farms to ward off evil spirits and leave offerings of food and mead for the dead that was believed to walk the Earth on this day. When Christianity was introduced during the 8th century, these traditions became conflated with the legend of St. Walburga – a nun who lived at the Heidenheim monastery in Germany and eventually became the abbess at that location. People could celebrate their pagan traditions on the day of her canonization and attribute their celebrations her, thereby avoid the reprisal of the Church.

Walpurgis Night is celebrated in much the same way it has always been. In parts of Germany, it is celebrated by dressing up in costumes and playing pranks – which makes it very similar to Halloween celebrations in the United States. Some people also create loud noises, sometimes using fireworks, to drive away evil spirits. People celebrating this holiday may also hang spring foliage around their home for good luck or leave pieces of bread coated with honey and butter called “Ankenschnitt” for the spirit dogs that are believed to travel from house to house. In Finland, May Day and Walpurgis Night are usually combined into a celebration known as Vappu. In Sweden, folk songs are often sung, people often enjoy a breakfast of champagne and strawberries and BBQ is usually eaten on this day.

In many countries of the countries which celebrate this holiday, huge bonfires are set. In the Czech Republic, Walpurgis Night is known as Pálení čarodějnic or “burning of the witches” in English. These bonfires can be over 8 meters tall and produce enormous amounts of smoke.