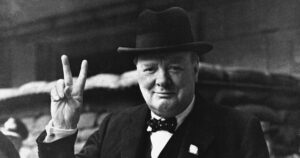 A standout event in British history was forever declared on May 7, 1945 as the German troops surrendered to the Allies and we saw the end of World War II.

An announcement was made via radio broadcast, relaying the information to the nation and the following day, May 8, was declared a national bank holiday.

The country rejoiced, taking to the streets to celebrate what is now known as Victory in Europe Day. 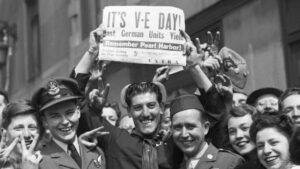 The stiff upper lip that had held the nation together through some of its grimmest times during the previous six years evaporated into scenes of pure unbridled joy.

The long, grinding war in Europe was over.

Victory in Europe Day (VE Day) had finally come. And the soldiers who had landed in Normandy in 1944 or in Italy in 1943 and had pressed ahead to defeat Hitler’s forces would soon be coming home.

The country, which had seen many of its homes and factories pulverised by Nazi German bombing, could start to rebuild. 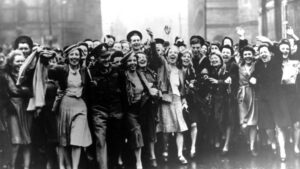 It also meant wartime restrictions that would be the most stringent the UK population would be forced to live under until the coronavirus lockdown in 2020 would soon be ending.

It was not the end of the war, but it was still a time for nothing other than rapturous celebration. 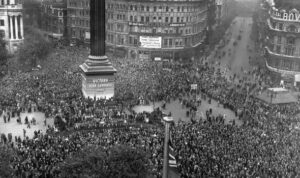 It was 75 years ago. It was a day they would remember for ever.

Every year, VE Day is celebrated up and down the country with street parties, community gatherings, dancing and singing and this year’s May Day bank holiday was moved to coincide with the 75th anniversary on Friday, May 8 especially.