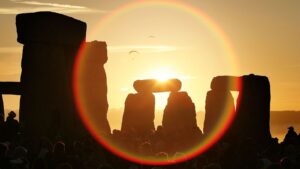 The Summer Solstice is one of the four ‘quarter-days’ of the year, which modern Witches call the four ‘Lesser Sabbaths’, or the four ‘Low Holidays’. These, along with the four great festivals, the two solstices and the two equinoxes make up the Pagan Celtic year. Correctly speaking, due to the procession to the equinox the date may vary by a few days depending on the year as the solstice is an astronomical point and occurs when the sun reaches the Tropic of Cancer, and we experience the longest day and the shortest night of the year. Astrologers, on the other hand recognize the time that the Sun enters the sign of Cancer as the true time of the solstice. However, for the more mundane amongst us the solstice will be celebrated on the fixed calendar date of June 24th – unless anyone in the vicinity of Stonehenge wants to go and sight down its main avenue and let us know otherwise.

As with other celebrations, Midsummer is known by a myriad of other names – Solstice, Litha, Midsummer, Alban Hefin.. (all depending on what you worship or who you heard it from) and is most commonly worshiped or acknowledged as falling on the 21st of the month, however due to the multitude of calendrical changes over the years, the 24th is now the nearer bet. Again, like other Pagan dates, Midsummer was adopted by the church as the feast of Saint John the Baptist, just as the Pagan midwinter celebration of Yule was adopted to celebrate the birth of Jesus, and although modern witches tend to use the term Midsummer, our true Pagan ancestors probably used the term Saint John’s Eve, and began their celebrations as was the Celtic tradition at sundown on the 23rd June by lighting large bonfires. These fires served the purpose of warding off evil spirits and providing light for the revelries about to commence (people often jumped through the flames for good luck.) – this was known as ‘setting the watch.’ Adding to the general infernal theme, the streets would be lined with lanterns, and bands of folk carrying cressets (a type of pivoted lantern carried on a pole) and wearing garlands of flowers would wander from bonfire to bonfire. These folk, known as the ‘Marching Watch’ often comprised of Morris Dancers and others who were traditionally dressed as a Unicorn, a Dragon and six hobby horse riders. Other customs are many and vary from village to village, but a commonly observed ritual would be that of young folk staying up the whole night to see in the new dawn, a vigil still observed today, although generally the true meaning of the solstice has been lost for some in an excuse for a party. The very brave of our forefathers would go a step further and keep watch in the centre of a circle of standing stones. It was said that to undertake this particular vigil would certainly result in either death, madness or the inspiration to become a writer.. I know quite a few folk who have been brave enough to spend Saint John’s Eve in a stone circle, and we are, indeed, all mad…

Of course, no essay on Midsummers Eve would be complete without at least a small reference to the great British Faerie Folk. According to British lore, Midsummers Eve is a very important night in the Faerie calendar, and should you wish to see them all you need to do is gather fern seed at midnight and rub it onto your eyelids – according to legend that is, I personally don’t advocate rubbing anything onto your eyelids to see gentry folk or for any other reason for that matter. Obviously, if you are out and about this Saint John’s Eve and are a little nervous about getting home for reasons other than the current air travel crisis, there are a few precautions you can take to protect you from the influence of those wee folk who are of less than admirable intent. Firstly, you could carry a sprig of rue in your pocket, it is unclear as to how this herb will protect you from certain abduction by the little people but protect you it is said it will. Or you could turn your jacket inside out. If both these measures seem to fail, you should seek out a Ley, and stay on the straight track until you reach your destination – this, it is said, will keep you safe from any malevolent powers, as will crossing living water, living water being a stream or river. Another custom which I personally believe we should all make an effort to revive is that of decking ones house with herbs and flowers. Our ancestors favored Birch, Fennel, Saint John’s Wort, Orpin and White Lilies, which they used as garlands particularly over the windows and doors. Some plants were even said to hold special magical powers on this night – Rue (as we mentioned before) roses, Saint John’s Wort, Vervain and Trefoil. So, take your evening stroll this Midsummers Eve, gaze in wonder at the stunning countryside, the wonderful, volcanic ash induced sunset and bask in the amazing evening birdsong, and if you should come across a shifty looking fellow traveler with his coat on inside out and his pockets stuffed with foliage, casting furtive glances from streaming, seed covered eyes into the undergrowth and marching in a dead straight line over and under every obstacle in his path, do not be alarmed – he’s probably observing an ancient tradition, and you should be thankful he didn’t decide to do it skyclad!