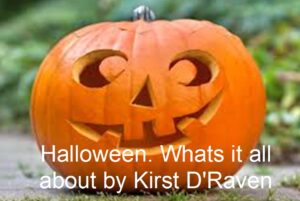 Halloween had its beginnings in an ancient, pre-Christian Celtic festival of the dead. The Celtic peoples, who were once found all over Europe , divided the year by four major holidays. According to their calendar, the year began on a day corresponding to November 1st on our present calendar. The date marked the beginning of winter.

Since they were pastoral people, it was a time when cattle and sheep had to be moved to closer pastures and all livestock had to be secured for the winter months. Crops were harvested and stored. The date marked both an ending and a beginning in an eternal cycle. The festival observed at this time was called Samhain (pronounced Sah-ween). It was the biggest and most significant holiday of the Celtic year. The Celts believed that at the time of Samhain, more so than any other time of the year, the ghosts of the dead were able to mingle with the living, because at Samhain the souls of those who had died during the year traveled into the otherworld. People gathered to sacrifice animals, fruits, and vegetables. They also lit bonfires in honor of the dead, to aid them on their journey, and to keep them away from the living. On that day all manner of beings were abroad: ghosts, fairies, and demons–all part of the dark and dread.

Samhain became the Halloween we are familiar with when Christian missionaries attempted to change the religious practices of the Celtic people. In the early centuries of the first millennium A.D., before missionaries such as St. Patrick and St. Columcille converted them to Christianity, the Celts practiced an elaborate religion through their priestly caste, the Druids, who were priests, poets, scientists and scholars all at once. As religious leaders, ritual specialists, and bearers of learning, the Druids were not unlike the very missionaries and monks who were to Christianize their people and brand them evil devil worshippers.

As a result of their efforts to wipe out “pagan” holidays, such as Samhain, the Christians succeeded in effecting major transformations in it. In 601 A.D. Pope Gregory the First issued a now famous edict to his missionaries concerning the native beliefs and customs of the peoples he hoped to convert. Rather than try to obliterate native peoples’ customs and beliefs, the pope instructed his missionaries to use them: if a group of people worshipped a tree, rather than cut it down, he advised them to consecrate it to Christ and allow its continued worship. In terms of spreading Christianity, this was a brilliant concept and it became a basic approach used in Catholic missionary work. Church holy days were purposely set to coincide with native holy days.

Christmas, for instance, was assigned the arbitrary date of December 25th because it corresponded with the mid-winter celebration of many peoples. Likewise, St. John’s Day was set on the summer solstice. Samhain, with its emphasis on the supernatural, was decidedly pagan. While missionaries identified their holy days with those observed by the Celts, they branded the earlier religion’s supernatural deities as evil, and associated them with the devil. As representatives of the rival religion, Druids were considered evil worshippers of devilish or demonic gods and spirits. The Celtic underworld inevitably became identified with the Christian Hell. The effects of this policy were to diminish but not totally eradicate the beliefs in the traditional gods. Celtic belief in supernatural creatures persisted, while the church made deliberate attempts to define them as being not merely dangerous, but malicious. Followers of the old religion went into hiding and were branded as witches.

The Celts built bonfires to frighten the spirits away, and feasted and danced around the fires. The Hallowe’en fires brought comfort to the souls in purgatory and people prayed for them as they held burning straw up high.

The fires of Hallowe’en burned the strongest in Scotland and Ireland, where Celtic influence was most pronounced, although they lingered on in some of the northern counties of England until the early years of the last century.

The last night of October was transformed by the Church into the vigil of All Saints’ or Hallowe’en. Christians believe that goodwill always conquers evil, and that Jesus, the light of the World, defeats all the fear of darkness.

In England the day of fires became November 5th (Bonfire Night), the anniversary of the Gunpowder plot of 1605, but its closeness to Hallowe’en is more than a coincidence. Hallowe’en and Bonfire Night have a common origin they both originated from pagan times, when the evil spirits of darkness had to be driven away with noise and fire.

In Lancashire, ‘Lating’ or ‘Lighting the witches’ was an important Hallowe’en custom. People would carry candles from eleven to midnight. If the candles burned steadily the carriers were safe for the season, but if the witches blew them out, the omen was bad indeed. In parts of the north of England Hallowe’en was known as Nut-crack Night. Nuts were put on the fire and, according to their behaviour in the flames, forecast faithfulness in sweethearts and the success or failure of marriages.

Hallowe’en was also sometimes called Snap Apple Night, in England. A game called snap apple was played where apples were suspended on a long piece of string. Contestants had to try an bite the apple without using their hands. A variation of the game was to fix an apple and a lighted candle at opposite ends of a stick suspended horizontally and to swing the stick round. The object was to catch the apple between the teeth whilst avoiding the candle.

Many places in England combined Hallowe’en with Mischief Night (celebrated on 4 November), when boys played all kinds of practical jokes on their neighbours. They changed shop signs, took gates off their hinges, whitewashed doors, and tied door latches.

Another tradition from which Halloween customs might have come from is a ninth century European custom, souling. It was a Christian festival where people would make house calls begging for soul cakes. It was believed that even strangers could help a soul’s journey to heaven by saying prayers, so, in exchange for a cake they promised to pray for the donors’ deceased relatives.

The practice of dressing up in costumes and begging door to door for treats on holidays goes back to the middle ages, and includes Christmas wassailing. Trick-or-treating resembles the late medieval practice of “souling,” when poor folk would go door to door on Hallowmass (November 1), receiving food in return for prayers for the dead on All Souls Day (November 2). It originated in Ireland and Britain, although similar practices for the souls of the dead were found as far south as Italy.

Yet there is no evidence that souling was ever practiced in North America, and trick-or-treating may have developed in North America independent of any Irish or British antecedent. There is little evidence of masking or costuming on Halloween — in Ireland, the UK, or America — before 1900.

The earliest known reference to ritual begging on Halloween in English speaking North America occurs in 1911, when a newspaper in Ontario reported that it was normal for the smaller children to go street guising (see below) on Halloween between 6 and 7 p.m., visiting shops and neighbors to be rewarded with nuts and candies for their rhymes and songs. Another reference appears, place unknown, in 1915, with a third reference in Chicago in 1920.

In Scotland a similar tradition is called guising because of the disguise or costume worn by the children. Although traditions of seasonal guising stretch back at least as far as the Middle Ages, it became an exclusively Halloween practice only in the twentieth century. However there is a significant difference from the way the practice has developed in the United States. In Scotland, the children are only supposed to receive treats if they perform for the households they go to.

This normally takes the form of singing a song or reciting a joke or a funny poem which the child has memorized before setting out. Occasionally a more talented child may do card tricks, play the mouth organ, or something even more impressive, but most children will earn plenty of treats even with something very simple. However, guising is falling out of favour somewhat, being replaced in some parts of the country with the American form of trick-or-treating. Such a practice is in use in certain regions of the United States, as well. Children of the St Louis, Missouri area are expected to perform a joke before receiving any candy.

In modern Ireland there is neither the Scottish party-piece nor the American jocular threat, just “treats” — in the form of apples or nuts given out to the children.

However, in 19th and early 20th century Ireland it was often much more extravagant — for example, slates were placed over the chimney-pots of houses filling the rooms with smoke and field gates were lifted off their hinges and hung from high tree branches. Until the 1990s, Irish children said “Help the Halloween Party,” but are now more inclined to use the American “Trick or treat” due to the influence of American popular culture, movies, and television. In Waterford the phrase “attin far Halloween” is still commonly used, being the vernacular pronunciation of “anything for Halloween”. In Quebec children also go door to door on Halloween. However, in French speaking neighbourhoods, instead of “Trick or treat?”, they will simply say “Halloween”, though in tradition it used to be La charité s’il-vous-plaît (Charity, please).