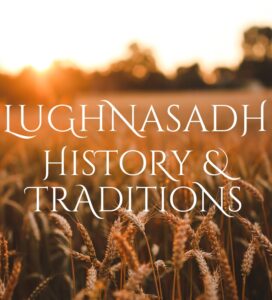 Lughnasadh: (Pronounced loo-na-sa) is a Pagan / Heathen Fire Festival, which would traditionally be celebrated at the full moon nearest the midpoint between the Summer Solstice and the Autuminal Equinox, and marks the end of summer and the beginning of autumn. The days will now grow increasingly shorter towards the end of Autumn, and the Celtic New Years Eve festival of Halloween…

For the more precise minded amongst you, the true astrological point of Lughnasadh is 15 degrees Leo. Lughnasadh is named for Lugh, the Celtic deity who presided over the arts and sciences. According to Celtic mythology, Lugh decreed that a commemorative feast be held feast be held each year at the beginning of the harvest season in honour of his foster mother, Tailtiu.

Tailtiu was the royal lady of the Fir Bolg. After the defeat of her people by the Tuatha De Dannan, she was obliged by them to clear a huge forest for the purpose of planting grain. She died of exhaustion in the  attempt. The legend states that she was buried beneath a huge mound named for her at the spot where the first feast for Lughnasadh was held in Ireland, the Hill of Tailte. At this feast were held games and tests of skill and strength, as well as a great feast made up of the first fruits of the harvest.

A rather popular feature of the games was the ‘Tailltean Marriages’. These informal betrothals lasted either a year and a day or until the next Lughnasadh, at the end of which the couple could either choose to continue the relationship or walk away, bringing the marriage to a close. The ‘Tailltean Marriages’ were still very common even up to the 1500s, and were usually solemnised by a poet or bard instead of by a conventional priest. It is possible also that these pairings were a precursor to the modern Wiccan tradition of ‘Handfasting’.  As the Christian faith marched across the world, brandishing its symbols of suffering and piety, the old festival of Lughnasadh took on a new identity. Loaves of bread were baked from the first of the harvested grain, and placed on the Church altars on the first Sunday of August. This new tradition was named Lammas, or Loaf Mass. As this is a more modern festival, it falls on the same date every year – the 1st August.

Lammas tide was also the traditional time for craft fares – a little like our own Harvest Festivals, where ornamental loaves in the shape of wheat sheaves are to be found adorning churches the length and breadth of the UK.

The medieval folk would decorate their houses, shops and even themselves with coloured braid, ribbons and clothing, parades were marched, songs were sung, tales told and dances danced. A most alluring spectacle, no doubt, the highlight of which was the fiery and rather macabre tradition ‘The Catherine Wheel’. The Roman Church had a habit of moving St Catherine’s feast day around the calendar at an alarming rate – probably because she was a mythical saint as opposed to real one, and also because her worship gave rise to the heretical sect, ‘The Cathari’.

During this ceremony, a large, tar covered wagon wheel would be taken to the top of the largest hill in the vicinity, set on fire and solemnly rolled down the hill – to me (and many others before me, no doubt) this seems kind of symbolic of the whole festival. The fiery wheel symbolising the Sun beginning its descent into the darker days of winter. Maybe it was left over from some ancient Pagan rite… Some mythologists see in this ritual the remnants of a Pagan rite symbolizing the end of summer, the flaming disk representing the sun-god in his decline; and just as the sun king has now reached the autumn of his years, his rival or dark self has just reached puberty.

Regardless of all this supposition and theorising though, Lammas seems to have lost some of its importance these days, which is a shame. A quick flick through a few modern books of shadows reveals little about the modern witch’s Lammas celebrations, except for a mention that poles should be ridden and a circle dance performed– a far cry from the colourful fetes and fairs of yesteryear.

Many commentators have bewailed the fact that traditional Gardnerian and Alexandrian Books of Shadows say very little about the holiday of Lammas, stating only that poles should be ridden and a circle dance performed. This seems strange, for Lammas is a holiday of rich mythic and cultural associations, providing endless resources for liturgical celebration…