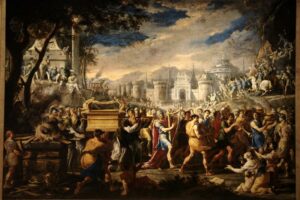 A number of modern writers and adventurers have claimed they have knowledge of the whereabouts of the Ark of the Covenant. From the more reputable Graham Hancock who has identified Axum in Ethiopia as the Arks resting place through the charlatan Ron Wyatt who claims to have found everything Biblical without offering a shred of evidence other than his claim to be a messenger of God. Even some orthodox Rabbis claim that the Ark is secreted beneath the Temple Mount. All their theories are based upon the selective reading of the Tanakh completely ignoring the history of Judah from the division of the Kingdom.

The fact is that in one respect the account in the Books of Kings, Chronicles, the Septuagint, the Talmud and Josephus are all in agreement. Shishak took ALL the treasures of Solomon’s Temple at the time of Rehoboam. And ALL means ALL. Nor was that the last time the Temple was desecrated, treasures taken and then replaced by copies. For those who prefer not to read the complete history of Judea from the time of Solomon to the time of Zacharia and the exile to Babylon, here is a very short synopsis. The Temple was frequently attacked, defiled and restored. Each time there was a restoration copies were made of the stolen items. That just happens to be the case and investigators at their peril ignore it.

” THEN ASA BROUGHT OUT SILVER AND GOLD OUT OF THE TREASURES OF THE HOUSE OF THE LORD …AND SENT TO BEN HADAD.” II Chron 16:2

Time of Josiah (639-609)
“AND THE KING COMMANDED HILKIAH THE HIGH PRIEST……..TO BRING FORTH OUT OF THE TEMPLE OF THE LORD ALL THE VESSELS THAT WERE MADE FOR BAAL AND FOR THE ASHERAH AND FOR ALL THE HOST OF HEAVEN….” II King, 23:4
Jeremiah makes it quite, quite clear that copies of the Ark had been made not just once but frequently.

2) ARK OR STONES?
There has always been a mystique about the Ark, its power and its importance to the Children of Israel. In the last few weeks, I have come to the realisation that we may have been misled by the stories, albeit by accident.

It has been shown there were two Arks and two sets of stones. The second set of stones which Moses brought up the mountain and which he did not break, were fashioned by Moses, as was the wooden Ark he took with him at the time. The Golden Ark was made by the Children of Israel. ONLY the first, broken set of stones, was made and handed over by GOD. A unique event in any religion or myth. If there is any power or mystique associated with the Ark, it does not rest with the box, it rests in the stones. Did Steven Spielberg in “Raiders of the Lost Ark” stumble on the truth when he shows that when the Ark was opened, what appeared was not a set of stones but a great energy and power?

3) DJAHARYA.
The name is not quite unique to the village in the Judean Hills in which I believe the broken stones to be buried. It is mentioned in only one other place anywhere in the Middle East.

Ezekiel had a vision of the times of the end and the Messiah entering Jerusalem.
At the time of Ezekiel, the East or Golden Gate was open.

1) Then he brought me back the way of the outer gate of the sanctuary, which looketh towards the east; and it was shut.

2) And the Lord said unto me, ‘this gate shall be shut it shall not be opened, neither shall any man enter in by it, for the Lord, the God of Israel, hath entered in by it; therefore it shall be shut.

The gate is now blocked up and a cemetery was built by the Moslems precisely because of this prophecy to prevent the Messiah from entering Jerusalem.