My Best Day out detecting by Digger Dawn

I have been a teacher for the past 17 years. I work in a college with teenagers with a range of learning disabilities from Autism to ADHD, All my students know I go metal detecting, many watch my YouTube channel and they love to listen to the history connected to my latest finds. I always include random bits of history connected to the date of the find or a story that would go with the find, and they ask many questions and always proclaim they would have liked history at school if I’d have taught it!

Many times, they have asked if they could go with me to metal detect somewhere. We are lucky that our college is situated on a large greenbelt of land with an old historic Hopwood Hall right in the middle of the campus. So one day last April, I decided to take a group of them out metal detecting with me in the grounds. I knew I was restricted by the amount of equipment I had, and also knew that I didn’t want massive bunker sized holes everywhere, so I secretly took in around 100 coins and artifacts ranging from Cartwheel pennies and buckles to bits of shrapnel and early in the morning before classes started, I spent an hour carefully planting the finds just under the grassroots in a half acre area just in front of the Hall.

Later that day, I had a class of 8 students. I started the session with a PowerPoint with the rules of metal detecting, about where you could detect and where you couldn’t, the different bits of equipment we would need and have to stay safe by wearing gloves. I then paired them up and gave them my Garrett Euroace, 400i, AT Max and the Apex and a pinpointer each. In the classroom we learned how to swing the detectors correctly, what signals we were looking for and how to turn the pin pointers on an off. I was amazed at the concentration and engagement these students showed, some of them usually not being able to focus on anything for longer than a minute! 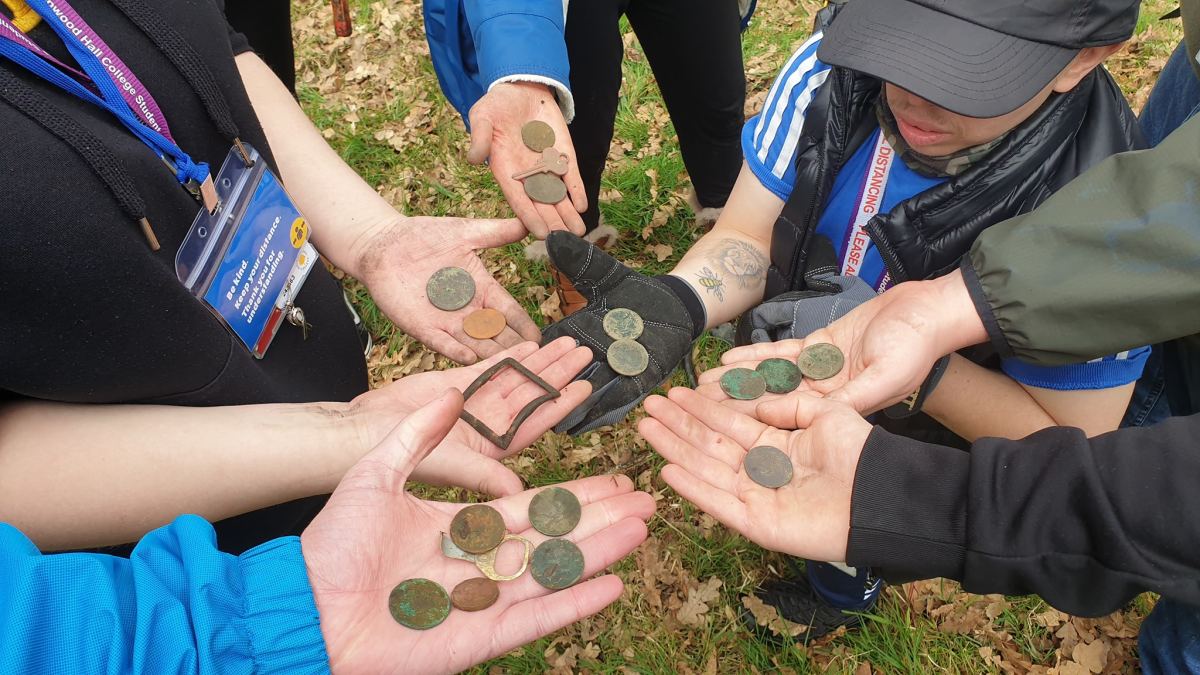 Some of the finds 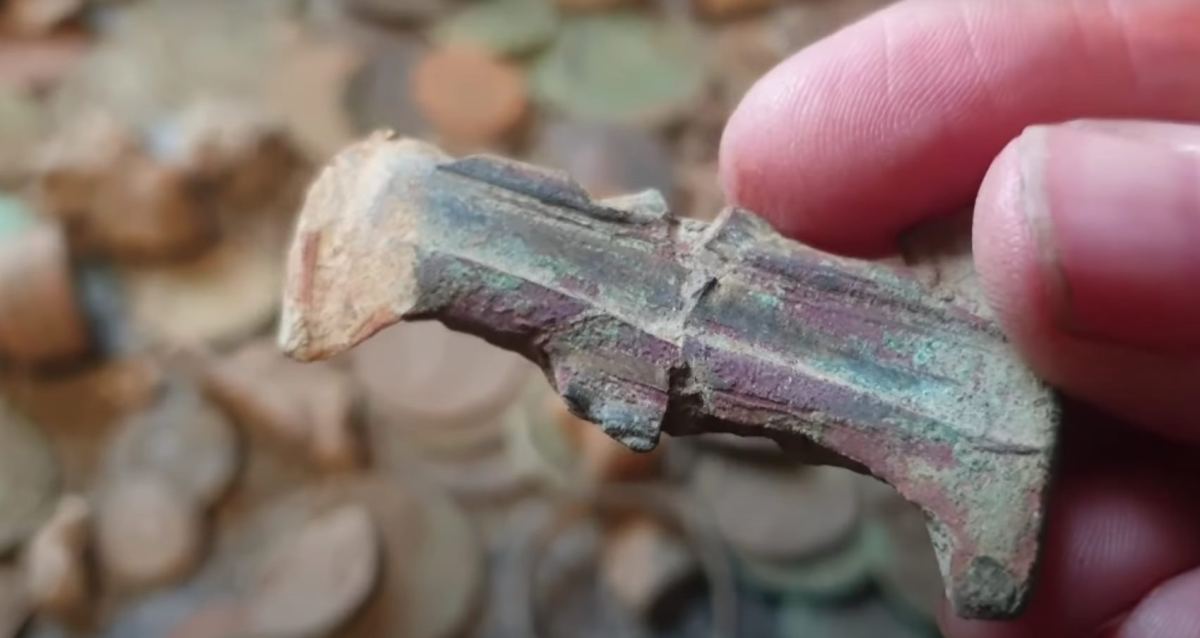 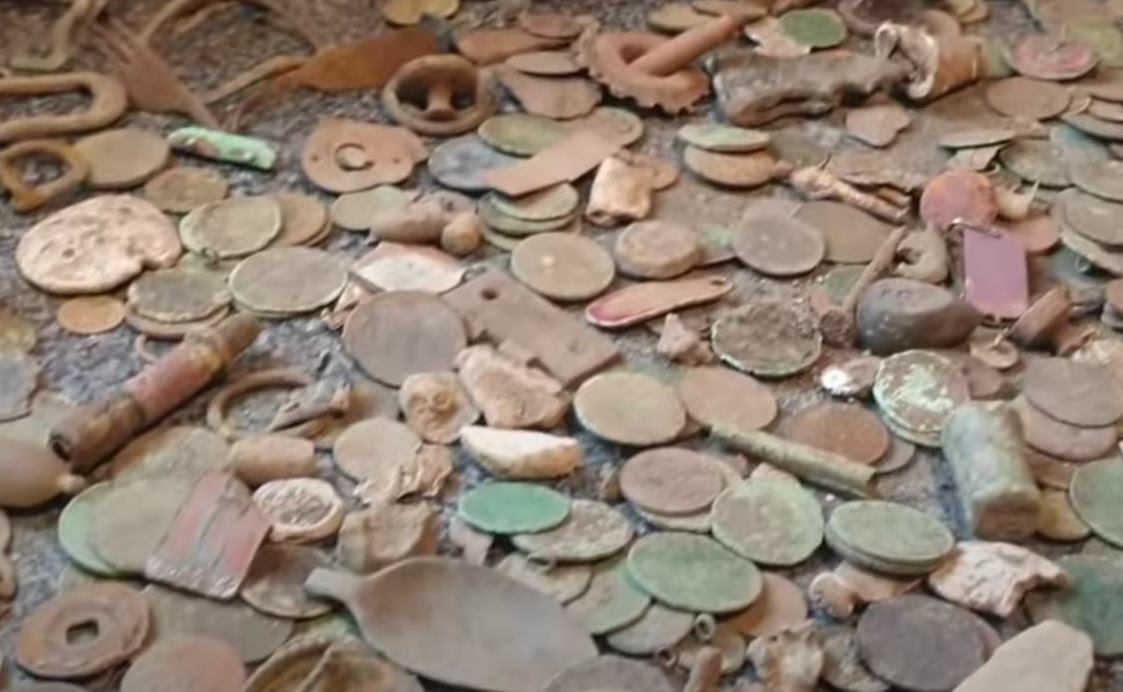 Some of the seeded finds

We headed off to the detecting area, and immediately off they went, swinging as I had shown them and it wasn’t long before their cries of “I’ve found something” started. As each Item was unearthed, I told them what it was and how old it was, and I watched in amazement at these youngsters who usually struggled to mix with others or remember anything, spent 2 hours completely engrossed with each other finding things and showing each other, squealing with joy at every find, It nearly brought me to tears it was probably the best metal detecting session Id ever had and I didn’t even have a detector.

The next day one young girl came and found me and still with the cartwheel penny in her hand she had found she said “ I took this to show my Aunty last night, and I told her it was a George 3rd Cartwheel penny from 1797” I was so proud of her, Id only told her that once and she’d remembered every detail, when usually she struggled to even remember her computer password! Another young man came to me a few days later looking very distressed. He said his Dad had put his coins in some tomato sauce and ruined them, he looked devastated stood there with the coins in his hands. I asked him if he would like me to change them for some better ones to which he nodded eagerly. The next day I took him in a fully cleaned and polished, Victoria penny and George 5th Halfpenny, he took them happily and smiled for the rest of the day.

Parents were thanking me for days and every student in the department wanted me to take them out. It was such a successful session, that the college has now asked me if I will deliver community-based taster sessions for people interested in starting metal detecting.

I feel so lucky to have this opportunity to share and mix my two passions in life, teaching and metal detecting.

Thanks to Digger Dawn for her words. Keep up the great work – Ed.