Skip to content
Home→Archaeology, Historical, History, Metal Detecting→Mudlarking. Whats it all about?

Mudlarking. Whats it all about?

Sift through the mud on the shores of any river and you’d be lucky to find a lost necklace amid the washed-up bottle caps and beer cans. But take a walk along the edge of London’s River Thames, and there’s a good chance you’ll find a piece of ancient history.

A mudlark is someone who scavenges in river mud for items of value, a term used especially to describe those who scavenged this way in London during the late 18th and 19th centuries. 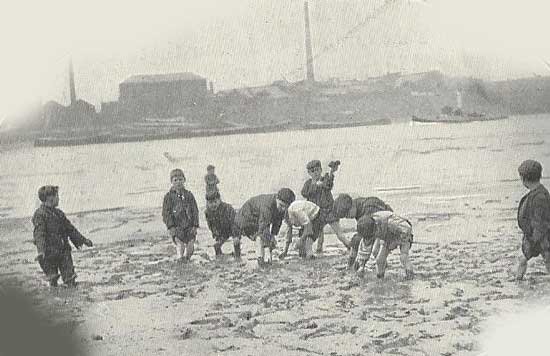 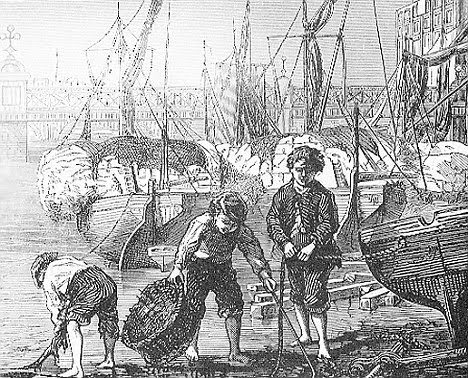 Mudlark’s would search the muddy shores of the River Thames at low tide for anything that could be sold; and sometimes, when occasion arose, pilfering from river traffic. By at least the late 18th century people dwelling near the river could scrape a subsistence living this way. Mudlark’s were usually either youngsters aged between eight and fifteen, or the robust elderly; and though most mudlark’s were male, girls and women were also scavengers.

Becoming a mudlark was usually a choice dictated by poverty and lack of skills. Work conditions were filthy and uncomfortable, as excrement and waste would wash onto the shores from the raw sewage and sometimes also the corpses of humans, cats and dogs. Mudlarks would often get cuts from broken glass left on the shore. The income generated was seldom more than meagre; but mudlarks had a degree of independence, since (subject to tides) the hours they worked were entirely at their own discretion and they also kept everything they made as a result of their own labour.

Henry Mayhew in his book, London Labour and the London Poor; Extra Volume, 1851, provides a detailed description of this category, and in a later edition of the same work includes the “Narrative of a Mudlark”, an interview with a thirteen-year-old boy, Martin Prior.

Although in 1904 a person could still claim “mudlark” as his occupation, it seems to have been no longer viewed as an acceptable or lawful pursuit. By 1936 the word is used merely to describe swimsuited London schoolchildren earning pocket money during the summer holidays by begging passers-by to throw coins into the Thames mud, which they then chased, to the amusement of the onlookers.

It’s this chance to dig up the past that has lured so many history buffs to the shores of London’s Thames at low tide, where they hunt for washed-up artifacts in a hobby called “mudlarking.” These treasure hunters routinely pluck all manner of mind-blowing items out of the mud, from medieval coins, to 2,000-year-old Roman relics, to the remains of pre-historic rhinos and sharks.

New treasures are revealed on the banks of the Thames twice a day, when the river’s tide goes out and the water level drops by seven metres. That’s when mudlark’s – all of whom must be licensed – climb down ladders to the freshly-revealed foreshore and start hunting for historical goodies.

Every trip to the foreshore offers a new set of surprises. You never know what you’re going to find, boats are constantly stirring up the waters of the Thames, churning items out of the silty riverbed. There are all kinds of items, from modern objects to relics from hundreds, even thousands of years ago.

Everything is kind of laundered together, You can have a modern cigarette butt next to a prehistoric flint tool… Every day is a new surprise.

Sandy first became involved in mudlarking in 2012, when he used to take his two young children down to the foreshore to hunt for crabs and shrimp at low tide. He got the idea to look around for treasure from a TV documentary, and soon, he was doing it as often as possible.

“I just couldn’t believe that you could actually go down there and find these historic artifacts that are that old,” he said.

Mudlarks have a close relationship with the Museum of London, where they are required by law to show all of their discoveries that might be older than 300 years. An agent at the museum records everything, offers some history on the finds, and occasionally requests the best pieces for the museum’s collection.

The museum also keeps a tight leash on mudlarking activities around the Thames, to ensure that the landscape is not torn apart by treasure-hunters. The southern shore is open to anyone with a mudlark’s licence from the government, but individuals are not allowed to dig more than a few centimetres down into the mud.

Restrictions are even tighter along the north shore, where the ancient Romans first founded London, and where some of the oldest artifacts remain. A select group of about 50 mudlarks are allowed to search along this shore, and to dig up to a metre deep in search of treasure.

For standard permit holders, metal detectors are allowed on the south bank, but not on the north one. But there are plenty of treasures while searching by eye on the north bank.

The best time to mudlark is at midnight in the summer, when the tide is as low as it gets. When this happens, a few brave mudlark’s head to the foreshore to pore over the areas they normally can’t access.

But, while Mudlarker’s have unearthed many historic treasures from the edge of the river, a few mysteries remain.

One is the vast quantities of tiny garnets often found on the foreshore. No one is certain where these red, semi-precious gemstones come from, but it’s a popular topic of speculation among the mudlarking community. Some suggest the gems might have been used for sandblasting in the past. Others think they might have fallen out of a shipment to a jeweller’s shop along the river.

A recent book was published by mudlarker Lara Maiklem called Mudlarking: Lost and found on the river Thames discusses Lara’s years from a child involved in the hobby.

Lara has scoured the banks of the Thames for nearly twenty years, in pursuit of the objects the river unearths: from Neolithic flints to Roman hairpins, medieval buckles to Tudor buttons, Georgian clay pipes to Victorian toys. What began as a search for solitude came to reveal the story of a city, its people and their lost ways of life. I acquired the book in an audio format and can not speak highly enough of it. However, I think the hardback reading experience would be far better, as I couldn’t see the pictures.