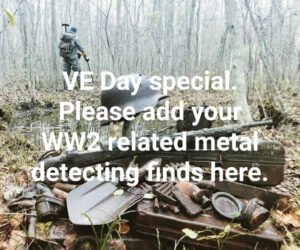 On Saturday 9th May 2020, our BIG TV show introduced a VE Day special. We were honoured to be joined by guests – Helen Higgins and Debra Darke, as well as guest co host for the evening, Treasure Hunting magazine editor – Julian Evan- Hart, as we discussed Helen and Debra’s parents experiences in World War 2. Some very poignant moments were heard and it was as said previously, and honour to hear them.

We also see a small selection of Julian’s archaeological and metal detecting aircraft finds, as well as The BIG metal detecting radio and TV show members WW2 metal detecting finds, which were quite outstanding and thanks to each finder, permission has been given to share the images from the show. Each set of finds includes the description and finders name. We have put into categories. Either by finder or type. Thank you to all those offering their finds for inclusion in the show.

Treasure Hunting magazines Julian Evan Hart co hosted the show and offered a small selection of his Aircraft finds for the viewers. During the show, Julian gave a more in depth live look at the items on his table.

Tom Trussel offered an abundance of his Metal detecting ww2 memorabilia. The first three images relate to a Crashed Mechesmit 110 bomber which bombed the wrong airfield in Croydon and was shot down over Pevensey on way home. The two crew members did get out. Tom’s Mum was in the Royal Artillery in WW2 on a radar with anti aircraft batteries, so there is a family connection to discovering the shrapnel in the first image. The following image shows a historic image of the aircraft in place, and a modern iage of the crash spot. The US Airforce removed the aircraft for further investigation during the war. Tom has also included a the full report, please scroll down to 15th August 1940  Tom has also included a link to Croyden aerodrome’s history which includes more information. Thanks Tom for all the images and information.

One find in particular really had me salivating. From Shaun Hindle on the Metal Detecting war relics facebook group. Some fantastic trench art

‘This is one of my most treasured little scoops …. these are all British 7.92mm BESA cartridges , they have been made into chess pieces , found on an old tented transit/training camp used by an armoured unit just be for they left for DDay . A very Personel find’ 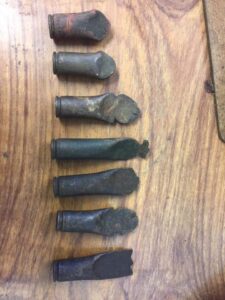 Medals and badges with finder and description

Aircraft. The Penny Aircraft Something I had never heard of before the show, a separate post will be constructed regarding these fascinating relics.

Here is the show in its entirety.