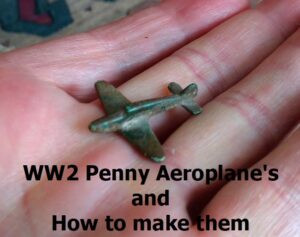 On Saturday 9th May 2020, our BIG TV show introduced a VE Day special. We were honoured to be joined by guests – Helen Higgins and Debra Darke, as well as guest co host for the evening, Treasure Hunting magazine editor – Julian Evan- Hart, as we discussed Helen and Debra’s parents experiences in World War 2. Some very poignant moments were heard and it was as said previously, and honour to hear them.

We also see a small selection of Julian’s archaeological and metal detecting aircraft finds, as well as The BIG metal detecting radio and TV show members WW2 relic finds. A separate post looks at these in depth here.

One fascinating discovery was posted, something I, myself, had never heard of. Penny Aircraft. These images were added onto The BIG metal detecting radio and TV show  Facebook group

The tiny brooch models of aircraft, made from pre-decimal pennies, were commonly seen as gifts hand-crafted by RAF ground crews for their girlfriends, wives or mothers during World War II. The Spitfire was an obvious choice of shape for this jewellery.

So, we decided to construct a ‘How to’ guide for making these fantastic little artifacts. Luckily Julian posted a series of images using a paper disc. Thanks to Julian for the use of the images.

Obviously it will be a tad more difficult using a pre decimal penny to create the aircraft.

Perusing the Internet for a video of the steps of manufacture came up blank. However, on a blog I did find somebody making a Penny aircraft from a UK 50 pence, How to Make a Miniature Plane From a Coin by Yobonoc

Why not try yourself… Out of paper first though!