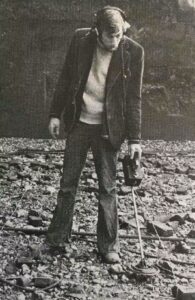 John Webb  is a veteran detectorist, one of the first in the country (starting in 1960) and we are sure many of you will have heard of him, owned his books or even one of the metal detectors he made!

There are several VERY worrying points up for consultation on the new Treasure Act proposal – cleverly snuck towards the end and vaguely written – presumably so they can bend the rules as they wish. As metal detectorists, John believes these proposals threaten to put a stop to our hobby.

Point 142 is where these potential new restrictions are listed

To this end we are putting forward several initial suggestions as the basis of discussion on the future form of the treasure process.

1. the introduction of a process similar to that in Scotland, whereby all Archaeological objects become the property of the Crown

2. the introduction of a regulation as in Northern Ireland where archaeological digging of any sort (both by professional archaeologists and others) is only allowed by permit. –
also

3. this one is a rumour, which I cannot find any written evidence for, however I feel it is worth a mention as, if true, will seriously affect us all- . Any Coin sold or brought must, by law, have proof of provenance be recorded by the British Museum

Some of the veterans reading this will no doubt remember the STOP! Campaign. For those who are too young to remember, in the 1970’s, various groups lobbied to ban metal detecting. John was one of the most out-spoken against the proposal, which was eventually prevailed over by a counter-campaign called DIG.

WE ARE WORRIED THAT HISTORY IS TRYING TO BE REPEATED.

John urges everyone to have a proper read through the new proposals – especially pages 40/41, and email/write to their MP’s protesting against the proposal, which could spell the end of the hobby we love!

We need to make as much noise as possible, otherwise they will quietly try and pass a new law whilst the country is distracted by big issues like Brexit.

Thanks to John Webb for highlighting this information and Mike Walker for adding it to various social media groups on his behalf.

1 thought on “Worrying aspects of the new treasure proposal in the UK by John Webb.”