Peterborough ware possibly originated from Scandinavia (Piggott, 1970, 279) and date to the late 4th Millennium BC to early 3rd Millennium BC. Peterborough ware discovered at Wallingford was calibrated through C14 dating, agrees with this date of 3270-3240 and 3110-2880 BC (Richmond, 2005, 84), (Thomas, 1999, 108). Peterborough ware is evident at the Causewayed Enclosures of Coombe Hill and Staines, various sites within the location of the Thames Valley and The North Downs of Folkstone (Barclay, 5) and was a valued tradition in pottery (Darvill, 2002, 133). It is possible to establish cultural links, lost trade routes and dietary features from the analysing of this pottery (Foster Carter, 2007, 93). Peterborough ware developed from earlier Neolithic pottery and Ebbsfleet ware, Mortlake ware and Fengate ware were subtypes of Peterborough ware (Thomas, 1999, 106), (Edmonds, 2002, 85), (Clark, 1966, 180), (Barclay, 1). The Peterborough ware (see Fig. 1) styles of vessels contain rounded bases, a wide neck and a long ‘S’ shaped profile rim. The ware is also decorated on the ‘sharp carination’ and shoulders by impressing whipped chord into the clay; this decoration varies from a criss-cross and herringbone pattern to circles and indentations (Malone, 2011, 238). The subtypes of Ebbsfleet ware, Mortlake ware and Fengate ware contain a broader collar rim and a flat base of which diverges from Peterborough ware. The decoration of the vessels are similar to Peterborough ware, they also include patterns of impressed and stamped designs by impressing bird bones, flint, twisted chord, reed and fingers (Pollard, 2002, 18), (Malone, 2011, 238-239), (Laing, 2003, 25), (Castleden, 1998, 84-85). Peterborough ware is possibly a localised tradition and was possibly replaced gradually with Grooved ware through the changes of styles, possibly through the establishment of farmsteads and field systems and also changes in food preparation (Pollard, 2008, 302-303), (Thomas, 1999, 107). 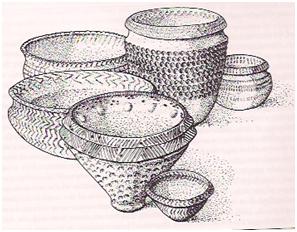 The craft of potting was possibly a tradition taught to each generation (Clark, 1966, 174) and possibly had taken the craftsman days to collect the raw clay (Foster McCarter, 2007, 94). It is unknown if this task was undertaken by a male or female (Castleden, 1998, 81). Peterborough ware was possibly produced at a particular time of year to exclude particular types of inclusions however, it is unknown if this is unintentional or methodical (Thomas, 1999, 121). The impurities are removed of large stones and tempering materials of sand, ash, small stones, broken shells, straw and bone are possibly applied to the clay, this allows the clay to be less sticky and more pliable. The inclusions reduces shrinking and cracking as the pot dries and also when fired (Foster McCarter, 2007, 94), (Malone, 2011, 230), (Laing, 2003, 11), (Pollard, 2008, 290-291). The inclusions of flint and quartz are also added to Peterborough ware. The creation of Peterborough ware consists of pinching or coil building (Pollard, 2008, 291) by the potter’s hands. Smaller pots were pinched and larger vessels were coil built (Foster McCarter, 2007, 95) and the decoration was impressed before firing. The firing of Peterborough ware was in bonfires or pits of a low temperature, the bonfires or pits were difficult to control the temperature and many pots were damaged or under fired, this is evident in the various surface colouring in Neolithic pottery finds (Pollard, 2008, 291), (Malone, 2011, 230).

Peterborough ware is evident in many locations in the Midlands to the South of the British Isles (see Fig. 2) and also discovered in various depositions of ditches, pits, middens, round houses, the funerary sites of Causewayed Enclosures, Long Barrows, Cursuses and also single burials (Bradley, 2007, 89, 150), (Piggott, 1970, 306-307). There is evidence of Peterborough ware discovered in depositions in Chambered Tombs and in rivers (Thomas, 1999, 86) and also discovered in a deposition of a circular hearth within a rectangular house at Windmill Hill, this discovery is a possible evidence for a permanent settlement dwelling (Smith, 1958, 268). The West Kennet Long Barrow enclosure contained many deposition assemblage items of bone, flint and human skulls, composed with Peterborough ware pot sherds and there was also Peterborough ware pot sherds evident at Windmill Hill amongst depositions of axes and fine flint artefacts (Malone, 2011, 230). The Sanctuary on Overton Hill contained Peterborough and Beaker ware pot sherds deposited within groups of circular pits and is possibly interpreted as a ritual tradition (Piggott, 1970 307). There are many pit deposits of Peterborough ware at Windmill Hill. The pits are placed in a line and was possibly utilised for storing water and it is possible the site was a Neolithic camp (Smith, 1958, 268-269), (Clark, 1966, 178). Pits diverge considerably in size and the deposits they contain. A variety of pits contain flint flakes and fragments of bone combined with Peterborough ware fragments. Pottery fragments were utilised to line pit walls and bottoms however, items of axes, laurel leaves, arrowheads and flint scrapers appear to have become deliberately broken in various discoveries, to possibly indicate a ritual deposition (Edmonds, 2002, 42-43), (Richmond, 2005, 93). At funerary sites, it is possible a feast was undertaken and the remains of the feast was deposited within the monument forecourt, there is evidence of burnt material, pottery sherds and animal bones purposefully deposited within a pit (Thomas, 1999, 80), (liverpoolmuseums.org.uk) and a comparable ritualistic deposition was evident within the mound of a round barrow at Woodhouse End in Cheshire however, the twenty three pottery vessels discovered were of Grimston ware (Mullin, 2002,1). Neolithic pottery is also evident in pits within Neolithic flint mines. At the flint mine of Grimes Graves, galleried pits contained the deposits of fragments and rim sherds of Peterborough ware displaying the characteristic ‘whipped and twisted chord and bird bone’ decoration (Clark, Piggott, 1933, 177, 181). 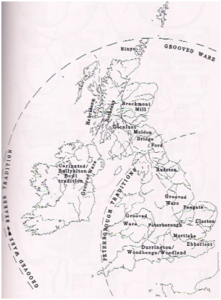 Fig. 2  A map of the British Isles illustrating the distribution of Peterborough Ware (Malone 2011, 235).

The decoration patterns on Peterborough ware possibly contain symbolic meanings. The implement utilised to create the designs are obtained from nature and it is possible the designs contain a relationship with particular places, creators and handlers. It is possible, the bird bones utilised to imprint the design,impresses the bird itself into the pot (Pollard, 2008, 297-298). The decoration is possibly significant with the rising and setting of the sun and is significant to ancestors (Darvill, 2002, 131-132) and ancestral rites. It is also possible; Peterborough ware was a source of power and authority and an emblem of celebration and commemoration to individual people and the relationship concerning the living and the ancestral dead (Edmonds, 2002, 87).

Julian Thomas suggests in his 1999 publication ‘Understanding the Neolithic’, that the design on pottery is a possible ‘quotation from the past’ and is a possible reconstructive action for memory. Thomas also suggests that the wide range of designs can possibly symbolise many different meanings of activities, locations and people (Thomas, 1999, 98, 111). The herringbone decoration on Peterborough ware and also on Grooved ware is a possible reconstruction of ‘basketry’, it is possible this design is significant with wooden structures or funerary contexts and is also symbolic of ancestor and living wares (Parker Pearson, Ramilisonina, 1998, 855).

The tempur or inclusions within Peterborough ware is also a possible symbolic or cultural meaning (Barclay, 3). The fabric of the pottery altered over time and inclusions were added to the clay for tempur, pot building and firing however, inclusions of a particular texture and colour were also added to the clay. Quartz inclusions are discovered in Peterborough ware, it is possible these inclusions contained symbolic implications through its shimmer in light. Dark colored rock inclusions are within similar vessels discovered in North Wales and North Yorkshire (Pollard, 2008, 295). Joshua Pollard suggests in his 2008 publication of ‘prehistoric britain’ that it is possible, pottery inclusions or tempur is symbolic through the grinding of important vessels to the owner, together with fragments of a vessel belonging to an ancestor or parent to produce a new vessel (Pollard, 2008, 295). Peterborough ware possibly contained various symbolic meanings depending on a region however, it is also possible the meanings are significant to ancestors (Parker Pearson, Ramilisonina, 1998, 855) and the vessels contained a special status (Edmonds, 2002, 97). Peterborough ware was distributed throughout Britain in the Thames Valley, The Cotswolds, Avebury and Somerset and also Dorset, Sussex and Kent (see Fig. 2). There are also discoveries in the Firth of Forth and Galloway in Scotland (Piggott, 1970, 303), Peterborough ware was possibly produced locally and traded throughout Great Britain (Castleden, 1998, 87).

There is a possible symbolic meaning of the assemblages of deposits including Peterborough ware. At the site of Grimes Graves, fragments of Peterborough ware was discovered within a pit also containing a carved chalk object (Clark, Piggott, 1933, 172, 175), possibly a cup and round chalk carved balls (Piggott, 1970, 42). At the site of Coneybury Pit, the primary deposition assemblage was pottery sherds combined with flint cores, blades, scrapers and flakes, three scrapers out of twenty five was burnt and also butchery evidence of cattle and roe deer bones. It is possible, the deposition is evidence of a ceremonial feast (Edmonds, 2002, 43) and the assemblages suggest a symbolic deposition (Richmond, 2005, 94). At the site of West Kennet Long Barrow, Peterborough ware sherds were discovered among the assemblage depositions within a burial chamber passage above burials, the assemblage comprised of flint and animal bone and also Peterborough ware sherds were deliberately broken into pieces and placed in two or more chambers (Piggott, 1958, 235). Timothy Darvill suggests in his 2002 publication ‘Prehistoric Britain’, that Peterborough ware is connected in relation to the deliberate closing of Long Barrows (Darvill, 2002, 134). At the site of Stonehenge, it is possible the assemblages are symbolic to ancestral associations and ceremonial practices through evidence of possible ceremonial feasting (Parker Pearson, Ramilisonina, 1998, 856), (Parker Pearson, Ramilisonina, 1998, 322). Several scatterings of Peterborough ware sherds was discovered in the King Barrow Ridge, Horse Hospital, Fargo Wood, Wilsford Down and in Stonehenge Triangle however, the sherds only amounted to several complete vessels (Richards, 1990, 30, 120, 235, 269). Cleal, Walker and Montague suggest in their 1995 publication ‘Stonehenge in its landscape’, that the utilisation of Peterborough ware is uncertain however, there is a relationship concerning the ‘living and the dead’ within the Fargo Down Ridge and the King Barrow Ridge. Evidence suggests these locations were important to its Neolithic users (Cleal, Walker, Montague, 1995, 477). At the site of Windmill Hill, Peterborough ware and flint arrowheads, scrapers and flakes and also polished axe fragments was discovered within the assemblage deposition of a post circle inside the enclosure (Darvill, 2002, 135), (Butler, 2008, 137).

In conclusion to this essay, the evidence we have for the role of portable material culture, including pottery in the British Neolithic is through the analysis of the pottery type of Peterborough ware discovered at various important Neolithic sites, including Stonehenge, Windmill Hill, West Kennet Long Barrow, Grimes Graves and Coneybury Pit. These discoveries are evidence for Neolithic settlements and camps, domestic activities and trade (Clark, Piggott, 1933, 182), (Richmond, 2005, 93), (Clark, 1966, 178), (Smith, 1958, 269). Evidence also suggests Peterborough ware was a social status function and of feasting (Pollard, 2008, 305), (Edmonds, 1995, 139), (Thomas, 1999, 93) however, the evidence of a symbolic meaning surpasses this evidence through the assemblages of Peterborough ware within the depositions and assemblages of ancestral monument sites. Peterborough ware was possibly a connection between ancestors and living people. This pottery was possibly a traditional spiritual element into the afterlife. Peterborough ware was possibly utilised in the symbolic rituals of feasting and depositions at ceremonies for the burial of the dead and commemoration to ancestors (Thomas, 1999, 43), (Butler, 2008, 175), (Parker Pearson, Ramilisonina, 1998, 322), (Parker Pearson, Ramilisonina, 1998, 855), (Piggott, 1958, 241).

Barclay, A. Ceramics of the South east: New directions. Accessed March 16, 2012 from http://www.shareweb.kent.gov.uk/Documents/leisure-and-culture/heritage/serf-seminar-papers-neolithic-andearly-bronze-age/alistaire-barclay.pdf