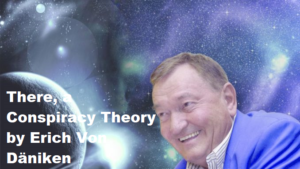 Sometime in June 1947 – the exact date still remains controversial – a UFO crashed in the United States town of Roswell, New Mexico. The bodies of several aliens were recovered and examined. At least, that is what numerous UFO books report. Films about the Roswell incident resulted, followed by pro and con TV documentary spin-offs.

The U.S. Air Force denied the event from the very beginning. It claimed a surveillance craft crashed. Later clarified, the debris came not from an extra-terrestrial vehicle, but from a so-called weather balloon that had been launched in Alamogordo. The apparent corpses were reported to be Test Dummies. These human-like figures were supposedly used to test parachutes while trigger-happy soldiers fired on them.

Also, parts of a strange material were secured. It’s called memory metal, because the strange alloy possesses the ability to repeatedly transform itself back to its original shape. If you turn this material on, it withstands knife scratches or other damage, then stretches and bends in a ghostly way until it resumes its original form. 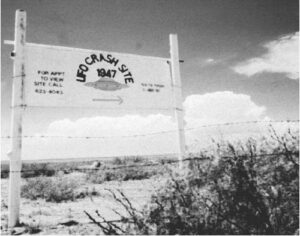 On August 28, 1995, Fox News (a U.S. broadcasting station) released film in which two men in lab coats dissected a body and cut at its innards. Produced by Ray Santili, the film became known as The Santili Film. A year later, John Humphreys, a British specialist in cinematic effects, said he produced an alien doll made of latex for the film. This was done according to instructions from Ray Santilli. After the broadcast of The Santilli-Film in German-speaking countries, the press was unanimous: everything was faked.

Also, within the dissected corpse was a so-called Progeria patient. (These are people who already look old as children). However, by then I had voiced protests. Either a real alien or a doll was used, but certainly not a Progeria patient. Why? Because Progeria sufferers are born human, and therefore have umbilical cords at birth. The beings on the dissecting table had no navel. UFO-believers were shocked. Was it all just lies and deceit? Or, perhaps a conspiracy from the Department of Disinformation?

Now, a book with hundreds of sources on the old and eternally young matter was published by Kopp Verlag. [1] The two authors, Dr. Thomas Carey and Donald Schmitt, presented new documents. Carey is a doctor of anthropology and a U.S. Air Force veteran. Donald Schmidt was the Director of the Centre for UFO Studies for many years. Both know the Roswell case from the very beginning.

First, the authors present the story of Wright-Patterson Air Force Base and describe this place in Dayton, Ohio as the true site of Area 51. Then they cleanly assert that there is no Hangar 18; that it was merely an invention for film. However, the Wright-Patterson Air Force Base does have a complex building with the number 18 (18A, 18B to 18F). Were pieces of wreckage actually delivered there from a UFO crash? The authors confirm this and quote from documents of deceased witnesses: “within 24 hours after our find, everyone in the White House knew that what we had found could not come from this world.” (P.208). And what is this strange material, this memory metal? “The more you put the material together, the more voltage increased…we could not break it, nor even scratch it in any way…We held a lighter to one end, and the material was the same temperature everywhere”.

But what about the extra-terrestrial corpses? Was that what they were? Carey and Schmitt quote several late doctors: “the specimen we inspected was 131 centimetres tall…The head had the shape of a pear and was oversized compared to human proportions. The eyes had a mongoloid appearance. The ends of the eyes furthest from the nasal cavity ran at a 10 degree angle diagonally upwards. Although I performed no detailed autopsy or examination of the head region, as this was not my area of expertise.”

Why not? Well, the witness was a dermatologist and only responsible for the skin. 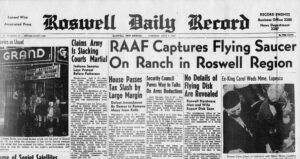 What do Roswell and the bodies from ET have to do with our theme? Whether it is aliens in the past or in the present – any influential circles launch disinformation campaigns. And this was so perfect executed, that the establishment only accepts their opinions. The so-called reason – the Zeitgeist – permits nothing else. Does that sound like a conspiracy theory? Is it that easy?

Thanks to the American Freedom of Information Act, the legally guaranteed freedom of information, it was possible for some groups to view formerly secret government files, including the Robertson Panel Report. This report tells the baffled layman that the government gave the following statements in the 1950s: “All intelligence network authorities are required, for the purpose of discrediting UFO-cases, to influence the mass media and infiltrate civilian research groups…to render UFO reports implausible and ridiculous…the public interest in UFO cases should be strongly undermined…and intelligence agents must ensure that any facts used by researchers be targeted through deliberate disinformation.”

This is called a conspiracy. Not of spinsters, but of government officials. Nothing surprises me anymore. Finally, I know the campaigns, the decades generally spent against the AAS topic. The most absurd part? Hundreds of thousands of clever astronomers on earth search for life in the universe. Billions of Euros have been spent for the installation of parabolic antennas, satellites, dishes, and astronomical institutes. Truly honest and well-trained people want to know: are we alone in the universe?

Yet a few nebulous tacticians knew the answer long ago. Would that those involved in the Roswell case were still alive, they would be held before an international court for misleading the public and wasting taxpayer money – no matter how good their motives were.