The Mermaid Pool by Dave Sadler

Mermaid Pool or Black Mere Pool, in the North Staffordshire Moors near the town of Leek, is the site of one of the only inland mermaid legends in England. The small, remote hilltop lake, around fifty metres wide, is a particularly haunting site. Set on the craggy and barren southern edge of the Peak District, beside the Leek to Buxton road, it is said that the dark peat-stained waters of the pool are bottomless; cattle refuse to drink there and birds never fly above it. 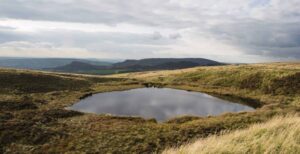 Tradition holds that the mermaid rises from the pool at midnight to lure unwary travellers to their deaths in the dark watery depths – but only single men, apparently. There are various legends concerning the origin of the mermaid. In one, a sailor from nearby Thorncliff fell in love with her and brought her back from sea, and in another she was originally a witch who transformed herself into a water nymph after been thrown into the pool during the Middle Ages. 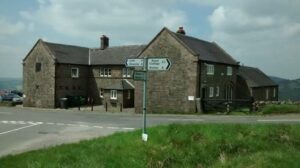 The mermaid legend can certainly be traced back to the mid nineteenth century when a wayside inn, around half a kilometre downhill from the pool, was renamed The Mermaid after the legend. The Mermaid Inn is now both a pub and restaurant with spectacular views of the surrounding countryside. At almost 500 metres above sea level, it claims to be the highest restaurant in England. If you want to hear tales of the mermaid you only have to visit the inn and you’ll find plenty of patrons keen to tell you that they know someone who has seen strange things up at the pool. Although I have been unable to speak to anyone who has actually claimed to have seen anything themselves, reports refer to weird curtains or pillars of light seen floating above the water at night. 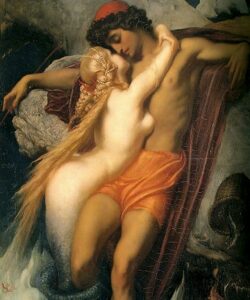 The site was also the scene of a murder and an attempted murder, one night, many years ago, a young lady was seen at the mere in great trouble.  A few men at the nearby Cock Inn were talking about the haunted mere.  One was dared to visit the pool for five shillings.  As he approached it he heard a woman’s cries and found a man trying to drown her.  He shouted, ‘Come, Dick, Jack, Tom, here is the rogue we are wanting!’  The would-be murderer fled and the distressed woman was taken to the inn.  She had been seduced by her attacker, and he had taken her to the pool to murder her.

In 1679 a woman peddler was murdered and dumped in Black Mere by a serial killer from Leek.  Andrew Sympson had already killed one person and assaulted another before he killed the peddler.

He worked at the Red Lion Inn in Leek.  In September 1677 a countryman came to the inn, went into town and sold some corn for £3.00.  Andrew saw the money so he followed the countryman on to the moors where he stole the money, bound his hands and feet and left him alone all night.  In the morning the victim was found and lived to tell the tale.

Six months later a wealthy young man arrived at the inn travelling to Nantwich on foot, at night asking for directions.  Andrew volunteered to accompany him for a mile or two.  They set off the next day and Andrew killed and robbed him.

The following May the peddler came to Leek with her wares and she took some money in town.  She then left for Bakewell, passing Black Mere.  Andrew followed her and at the mere he strangled her and took her money and wares, throwing her into the mere.  He hid the stash in a haymow and mentioned to a maid he would give her some lace.  He was slow to fulfill this promise so she followed him to the haymow and saw the lace.  Her boss went to the haymow to discover the loot, and Andrew was arrested and confessed to the three cases. 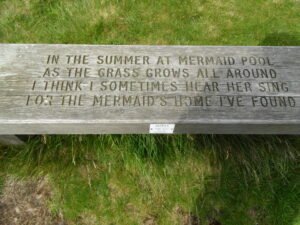 Following many reports of strange events at the Mermaid pool, I decided to have a closer look at the case, with the assistance of the Stoke Sentinel newspaper.

Legends are very difficult to substantiate, but any myth, legend or folklore is likely to have some truth, even if it is misconceived.

I began general research of the site and attempted to glean as much information about what has been reported over the years. The difficulty here is that some of these reports date back ten centuries. They are well-known to local people and there are many different versions of events.

This aside, I received a dozen calls telling of happenings at the site and from witnesses who have dived the site, and ended speculation of it having no bottom. In fact it is only 6ft deep at its lowest point.

I have witnessed animals drinking from the pool, and due to a force 9 gale, some of the reports were confirmed. Mostly the site is in the middle of nowhere on the peaks, giving an uneasy feeling in certain conditions.

It is in a well known geologically flawed area, giving credence to balls of light reported around the locations area. It is also possible that Mermaid Pool produces luminous marsh gas: rare but eerie phenomena known as Will-o’-the-Wisps. This might be the origin of the mermaid legend: a ghostly light hovering over the pool, thought to be a spectral water nymph by mystified night-time travellers. If luminous marsh gas is responsible for the mermaid legend, then the time to see her would be at night after a period of high wind and heavy rainfall when the usually still waters have been disturbed.

In my opinion folklore has played its part in the legend of Mermaid pool. The Staffordshire Moorlands is an area with a lot of legends and myths attached to it. Centuries ago, it was a fairly wild and remotely populated area, and most people scattered about the plains at that time were simple-minded, uneducated folk. It would be very easy to imagine seeing something on a stormy, foggy night, and that seems to be the setting for many of these myths.

This tale is that, a tale, anything other is misconception by the witness, caused by pre-emptive knowledge and the environmental conditions.