In December 2016, two metal detectorists – Joe Kania and Mark Hambleton discovered What is now known as the Leekfrith Torc Hoard. The hoard of three necklaces and a bracelet were discovered in a field in Leekfrith, Staffordshire. The items were buried close to the surface and about one metre apart.

It is not known why the Leekfrith Iron Age Torcs were buried, but it could have been for safekeeping, as an offering to the gods, or as an act of remembrance after their owner died.

The find was spotted by lifelong friends Mark Hambleton and Joe Kania. Mr Hambleton used to go metal detecting when he was younger with his father, who told him to resurrect his old hobby after hearing he had started fiing. He said: “I am so glad we took his advice and pleased of course that he got the chance to see these amazing pieces and prove he was right all along.” 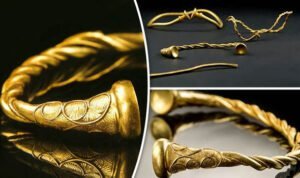 The pair have said they plan to split any proceeds with the farming family which owns the 640 acres of land where the find was made.

The treasure was found about 45 miles north of Hammerwich, near Lichfield, the site of the 2009 discovery of the Staffordshire Hoard.

The torcs were examined by Julia Farley, curator of British and European Iron Age collections at the British Museum, who described them as ‘a unique find of international importance’. She dated the jewellery to around 400-250BC and identified the style as Continental, suggesting the pieces may have been worn by wealthy women who had married into the local community. The gold content of the torcs is at least 80 per cent.

Two of the necklaces (one of them broken into two pieces) have plain gold loop bodies with thistle-head terminals. The third necklace is of a twisted-wire type linked by a clasp. Most important of the group is the unusual twisted bracelet, with its elaborate Celtic decoration on the terminals.

The torcs have now joined the archaeology collection at the Potteries Museum & Art Gallery, where they shine new light on Staffordshire in the Iron Age. 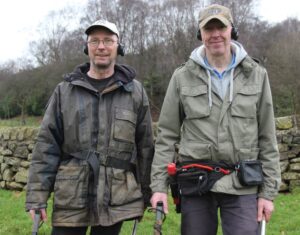 We were lucky to be able to interview Mark Hambleton at a talk at Swythemley and Heaton Community centre with Archaeologist – Alison Nicholl.