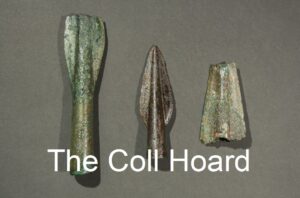 One morning in the summer of 2015 Kenny Macintyre, a local metal detector enthusiast on the Isle of Coll, was exploring the south of the island when he came across a metal object. Realising it was significantly older and more unusual than the scrap metal he typically came across, Kenny contacted the Treasure Trove Unit in Edinburgh, who are responsible for ensuring that items of cultural significance to Scotland’s past are protected and preserved in museums. The staff at the Treasure Trove confirmed that the article was indeed an ancient artefact, from the late Bronze Age, and was an exciting enough find to warrant an excavation at the site.

Over the following weeks, with help from Kenny and archaeologists from various organisations, thirteen items in total were found in the dig on Coll, believed to be from at least seven different weapons. Trevor Cowie, a former conservator at the National Museums of Scotland and expert on Bronze Age metalwork, analysed the finds and came to the conclusion that the hoard had been deposited over 3,000 years ago between 1000 and 800 B.C, in what at the time would have been a freshwater pool or loch of some description. While the exact reasons behind this are unknown there are other similar sites over Europe, and it is believed to have been an ancient ritual, probably a gift or act of appeasement to the gods or goddesses of the time.

Once the objects had been excavated from the site they were claimed by the Crown, as is usual with ancient objects in Scotland, and through the Treasure Trove process were allocated to Kilmartin Museum, the nearest museum to Coll on mainland Argyll. These precious and fragile items were then sent to the Scottish Conservation Studio in Edinburgh, where they were assessed and recommendations made for their conservation needs. The fact that they had survived so long in the ground of Coll is extraordinary, but now they have been removed from this delicately balanced environment they need to be specially preserved to prevent them from decaying further and to allow them to eventually be displayed at Kilmartin Museum, where they can help keep Scotland’s history alive for the next generations.

The thirteen Bronze Age artefacts discovered on the Isle of Coll in 2015 have now returned to Kilmartin Museum after being cleaned and conserved at The Scottish Conservation Studio in Edinburgh, thanks to supporters of last year’s crowdfunding campaign. Run by Kilmartin Museum, the campaign raised over £10,000, allowing these ancient artefacts to be saved from active bronze disease and preserved to prevent further decay.