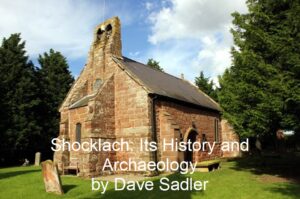 Welcome to Shocklach, a small rural hamlet set beside a tributary of the River Dee between Wrexham and Nantwich. It is a lovely agricultural area of quiet lanes stringing together pretty villages where visitors can see a rich mix of ancient properties, interesting old water mills, and grand mansions.

One of the beauties of the village is the ancient parish church dedicated to St.Edith which is of 11th-century origin. The church lies in an isolated position a short walk away from the village centre. It is a calm, tranquil building which is well worth the effort of getting there. 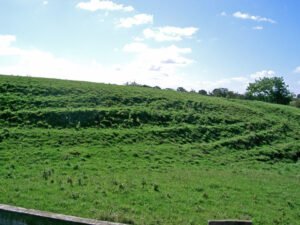 The area is noted for the Earthworks of Shocklach Castle. The low 13th-century embanked platform stands against the slope of a brook, showing the remains of its wide defensive ditch. It is in a stunningly beautiful spot from which there are good views of the surrounding countryside.

St Edith’s church in Shocklach is one of the countries eldest, built in the 11th century. Another of the area’s most idyllic settings.

The church is probably dedicated to St Edith. Unfortunately there are two St Edith’s but the later one, Edith of Wilton who died in 984, has no obvious connection with this area. However, the earlier one, known as Edith of Polesworth or Edith of Tamworth, was the sister of the Saxon King Aethelstan. In 925 she married Sihtric Sytriggson, the Viking King of York and Dublin. The wedding took place in Tamworth, Staffordshire, which in the 10th century was an important Mercian political and ecclesiastical centre; Shocklach would have been in its territory. Edith’s stepson was Olaf Sihticsson, also King of York and Dublin, who was defeated at the battle of Brunanburgh (usually interpreted as Bromborough on the Wirral) in 937. So could there be some connection between Shocklach and the Vikings? 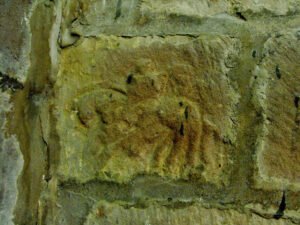 Within the church, tucked away in a corner at the western end near the bell-tower, is a small stone, about 12 inches [300mm] square. On it has been carved a man on a horse. The stone is very weathered and difficult to see, but it appears to show a rider who is carrying a shield and perhaps a spear, and may be wearing a pointed hat. The horse has its head lowered. The style is very reminiscent of Norse crosses, particularly those of the Isle of Man. It is possible that the stone formed part of a pre-Norman cross which once stood outside the church, combining pagan and Christian images in a style seen around the shores of the Irish Sea in the Viking period.

With the eye of faith, it is possible to push the Viking associations of the stone even further. The details of the horse’s anatomy are not clear, but there are too many legs for a conventional animal and there is certainly no second horse behind it to account for the extra legs. The same eye of faith may make out a hunched bird sitting on the horse’s rump behind the rider.

One suggestion to explain all this is that the figure represents Odin, the greatest of the Norse gods, sitting astride his horse Sleipnir. He was the fastest horse in the whole world – so fast, in fact, that he needed eight legs. And Odin had two ravens that brought him news from around the world, which would explain the bird on the horse’s back.

If this is indeed a crude representation of Odin and Sleipnir, and if we have the right St Edith for the church dedication, then there is a possibility that there was some sort of Scandinavian presence at Shocklach in the tenth or eleventh centuries. This should not come as too much of a surprise since there were many Norse settlers living in Chester and the Wirral at the time. 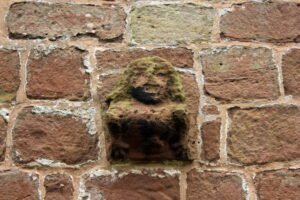 The church itself is quite strange as it was built over a mile away from Shocklach’s now ruined castle, but further still from the village. Not the normal way of building a community.

The hamlet was once part of the ancestral home of the Brereton family. The church still regularly holds ancient Festival’s, reed ceremony’s and suchlike.

A LIDAR report by Chapel Archaeology has been produced of this interesting area of Shocklach. LIDAR is a surveying method that measures distance to a target by illuminating the target with pulsed laser light and measuring the reflected pulses with a sensor. Differences in laser return times and wavelengths can then be used to make digital 3-D representations of the target. The name LIDAR, now used as an acronym of light detection and ranging (sometimes light imaging, detection, and ranging), was originally a portmanteau of light and radar. LIDAR sometimes is called laser scanning and 3-D scanning, with terrestrial, airborne, and mobile applications.

At the end of the long drive leading to St Ediths and just over the road, lies Shocklach’s 2 Motte and Bailey Castles.

Shocklach Castle is an earthwork enclosure fortress or fortified manor house, the successor to Shocklach Motte. (Directly opposite) The low 13th century D-shaped embanked platform, with the remains of its defensive wide ditch, stands against the slope of a brook. Standing to the east of the motte, the platform is possibly a later adaptation of its bailey. 3 miles north-west is Holt Castle and 5 miles south-east at Malpas is Castle Hill.

A well preserved motte, situated on the edge of a steep ravine. The mound rises 4.0 m above the bottom of the ditch, which has a counterscarp bank.

Shocklach was a Welsh frontier fortress forming an important link in the chain of Cheshire castles between Alford and Malpas. Lord Dudley claimed the right in 15 Henry  VII to maintain this castle fortified, ditched and crenellated. The earthworks were very strong, occupying an important pass where the present road to Chester crosses a deep ravine. On the W side of the road is a very early circular mound 20′ high, on the top of which the Normans placed their keep. On the E side of the road is another raised kite-shaped platform also of ancient formation. No vestiges of masonry now remain.

Motte castles are medieval fortifications introduced into Britain by the Normans. They comprised a large conical mound of earth or rubble, the motte, surmounted by a palisade and a stone or timber tower. In a majority of examples an embanked enclosure containing additional buildings, the bailey, adjoined the motte. Motte castles and motte-and-bailey castles acted as garrison forts during offensive military operations, as strongholds, and, in many cases, as aristocratic residences and as centres of local or royal administration. Built in towns, villages and open countryside, motte castles generally occupied strategic positions dominating their immediate locality and, as a result, are the most visually impressive monuments of the early post-Conquest period surviving in the modern landscape. Over 600 motte castles and motte-and-bailey castles are recorded nationally, with examples known from most regions. Some 100-150 examples do not have baileys and are classified as motte castles. As one of a restricted range of recognised early post-Conquest monuments, they are particularly important for the study of Norman Britain and the development of the feudal system. Although many were occupied for only a short period of time, motte castles continued to be built and occupied from the 11th to the 13th centuries, after which they were superseded by other types of castle.

Shocklach Castle is of particular importance as one of a group of early post-Conquest (c.1100) mottes forming a defensive system aimed at curbing constant Welsh raids on the rich farming areas of south Cheshire. Additionally the site lies within an area containing the most important concentration of medieval monuments in Cheshire. These monuments include two shrunken medieval hamlets, a defended green lane, a Norman chapel, well preserved ridge and furrow, a ford across the River Dee, and a complex of communally owned water meadows.

The 2nd motte at Shocklach is now barely recognisable, overgrown and difficult to access.