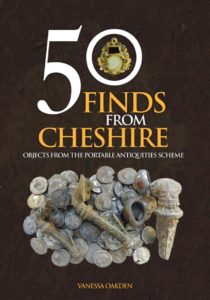 This new work celebrating finds reported to the Portable Antiquities Scheme in Cheshire provides an illustrated insight into the county’s archaeology, and challenges previous views on ancient life. Its chronological layout clearly charts key finds from the area, spanning from the Neolithic to the post medieval. Although succinct, it delves into discussion about the possible origins, uses, and values of each artefact.  The written information is made easy to understand with good use of full colour images.

“The objects of our ancestors can tell us a lot about the past, from what was happening with the economy and changes in fashion to where people traded, lived and worked. Through them, we can discover the story of everyday people who don’t appear in documentary accounts. The North West is traditionally seen as devoid of archaeology; however, through the work of the Portable Antiquities Scheme alongside more recent traditional archaeological investigations, this view is changing. By looking at objects discovered in Cheshire, recorded by the Portable Antiquities Scheme, we can re-evaluate our knowledge of the past within the county.

Cheshire has revealed its past to us through axes from the Bronze Age, Roman hoards, Viking silver, Medieval and Post-medieval jewellery. Within the past few years, three important Roman hoards have been discovered in the county demonstrating that Romanisation took hold. The impressive Huxley hoard brings us into the Early Medieval period. A variety of both functional and decorative objects tells us more about the people who lived and worked throughout our communities. 50 Finds from Cheshire allows us to look at snapshots of our past using archaeological finds to illuminate what has previously been hidden from us. ”

Vanessa Oakden, Finds Liaison Officer for Cheshire, provides a fascinating and accessible analysis of objects that range from the familiar to the obscure, commenting on the rarity of the artefacts featured. By connecting a large number of small finds, the author creates a personal view of Cheshire’s past, beginning the book with a description of flint tools and arrowheads in the late Neolithic era, and ending it with an engaging account of flint from a musket dating back to the 1600’s. This continued but changing use of flint reflects advancements in weaponry as well as its importance in the development of Cheshire’s inhabitants.

A great book, well worth the purchase, with some eye opening finds from my County of birth and residence.