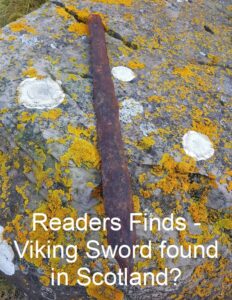 We receive quite a few images to assist in identification or that readers just like to show. And just sometimes we have a WOW moment, Well that moment came yesterday.

As you know I am the host of the BIG Metal detecting podcast .One of our new listeners – Stuart Payne, has become interested in the subject and is due to acquire his first machine. But given the history of the area he lives in North East Scotland, he has spent time at his local museums and walking the land, beaches and caves, scouring with his eyes for potentially interesting artifacts.

A few months ago he came across some bone, which he believes to be that of a sheep. And interestingly a WW2 artillery shell, which we have had identified for him and is in fitting with local history.

And then came 5 images of a jaw dropping variety. Stuart has been walking and using only his eyes but spotted something interesting between the rocks on his local beach. The beach rarely has human occupation, only a few walkers. Over he went and had to contain his excitement. He had found a Sword.

Encrusted with corrosion and missing the Pommel, Handle and cross guard. He held aloft the sword, complete from tang to point. measuring  70cm long and 5.5cm at widest point

Excitedly he rushed home and took additional images of the sword. He began researching the artifact and sent images to the Scottish Treasure Trove. Additional emails were sent to a forger off historic swords, who confirmed the authenticity. Although ageing the sword was an issue.

Then came his message to me. And 5 images plus information of the locality and history of the area. The location is within a short distance to a Viking raid and also a large clan battle, as well as a pictish community. 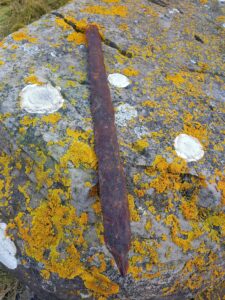 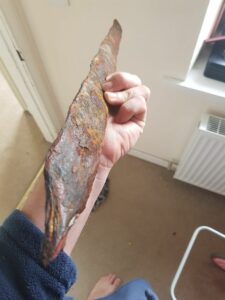 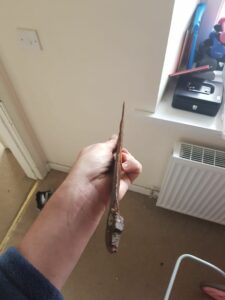 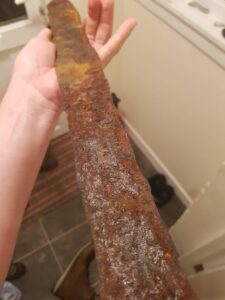 (Please click on each image to expand. Please note. The reader has kept the sword in suitable conditions and has always worn gloves to handle it since the image was taken.)

So with our Stuart’s permission we communicated with people with better knowledge than ourselves through private messages and also on social media.

Our first response pointed us towards a website regarding Norwegian Viking Age Swords Typology . Peterson types were discussed and classification by blade and hilt construction. And although the images were not perfect for identification, the general consensus seemed to be that due to the sword type and locality of the find to Viking activity.

An interesting note from one source suggested ” The area where the blade transitions into tang has more the look of a spear socket than a sword hilt, reminding them more of the infamous Atgeir or “sword-on-a-stick” ”

A further source stated ” It’s tough to tell by just the blade alone, but the general shape of the blade is consistent with the type of swords that the Vikings would have used. The amount of weathering also looks like known Viking era sword finds.”

I am not an expert. But glancing at the images alongside Dr Petersons Norwegian Viking Age Swords Typology as well as The Sword Typology of Alfred Geibig I certainly can see a similarity between the sword discovered and swords similar.

We have also discussed the possibility of the sword also being related directly to the clan battles or a simple local persons for protection. But, until he receives a response from his local museum or treasure trove. We can all agree that whatever the ethnicity of the sword, it is a wonderful beach find, by a keen set of eyes of a very interested person, which has led him to become more involved and interested in Historically related activities.

Please note. The laws in England and Scotland differ when finding something of historical significance. To learn more please visit the Scottish Treasure Trove

Thanks to all who have assisted so far. Any additional comments can be left for discussion in the comments area.

Thank you especially to Stuart Payne for contacting us and allowing the information and images to be used.

Here is the latest episode of BIG metal detecting podcast –

Listen to “The BIG Metal Detecting Podcast” on Spreaker.