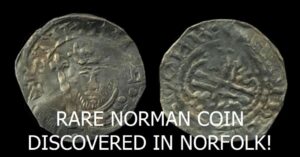 Jason Jones and his Minelab Equinox 800 went out for a day detecting in Norfolk, little did Jason know, he was about to discover his largest amount of Hammered coins, but also one that he would find one very rare coin in particular.

Jason struggled to identify one of the coins and sent images to Martin Allen of the Fitzwilliam Museum in Cambridge UK.

Martins response offered information describing his findings and the rarity of the coin which was identified as a Norman – Stephen penny from 1135 – 1154.

Thanks for the images of your very Rare interesting find, which I have recorded as EMC 2020.0131.

The reverse reads +ROGER:ON:GIhEVI, so this is a coin of the Ipswich moneyer Roger. This is a new type for a moneyer previously known in Stephen types 1 and 2, and in the Roundels type, which is a local Suffolk variant of type 1.

Jason was overjoyed with the identification, which now appears on the British Numismatic Society database 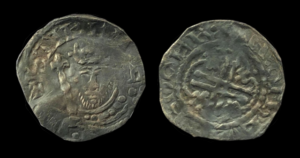 The British Numismatic Society database elaborates on the information sent by Martin Allen and gives a fascinating description.

Stephen penny containing a group of 3 roundels in the reverse legend.  A new type for the roundels variant of East Anglia (Spink 1288) which often has three larger roundels in a horizontal line across the reverse.   Very rare, and recorded by Martin Allen as EMC 2020.0131.

The reverse reads +ROGER:ON:GIhEVI, so this is a coin of the Ipswich moneyer Roger. This is a new type for a moneyer previously known in Stephen types 1 and 2, and in the Roundels type, which is a local Suffolk variant of type 1.

One of the very distinctive group of coins from East Anglian mints (Ipswich, Thetford, Sudbury and Bury St Edmunds) with three roundels on the reverse. Stephen was captured at the battle of Lincoln, 2 February 1141, and the coins were struck under the auspices of his wife, Matilda of Boulogne, who was tireless in raising funds, and armies, while her husband was in captivity. The roundels are a reference to Matilda’s family badge of the House of Boulogne.

Needless to say, Jason is over the moon with this very rare coin. Congratulations on a fantastic find and a big thank you for allowing us to publish all the information about the find. Thanks Jason.