A few months ago it has been reported widely about alleged illegal night-hawking activity in and around English Heritage properties in the UK. Sadly, this is a well known issue that has been widely discussed at individual, group and officialdom levels but continues to occur.

But are these reports as accurate as stated?

“Organised crime is being blamed for a rise in illegal metal-detecting at heritage sites, including one of England’s finest medieval castles and the battlefield of Hastings.

In some cases there were up to 100 holes where the illegal metal detectorists – known as nighthawkers – had dug up the soil. “How many of those are productive we just don’t know,” said Win Scutt, a properties curator and archaeologist at English Heritage.

The organisation is calling on members of the public to become its “eyes and ears” and report suspicious activity to the police. However, after some violent incidents it advised people not to confront nighthawkers.

Scutt said it was not only about artefacts being dug up, taken and presumably sold. “It is the damage to the sites. They are destroying the archaeological record. You can compare it to a scene of crime and seeing a knife and a gun and thinking: ‘I’ll be helpful, I’ll take them along to the police,’ and they say: ‘You’ve just destroyed all the information.’

“This is why we protect our sites so carefully. Not even we dig them. We are trying to preserve the record for future generations.”

Scutt said the activity was distressing. “These sites are in a sense libraries of archaeological information and poking holes in them is like burning down a library of documents that have never been read.”

The majority of the more than 400 places maintained by English Heritage were unstaffed and free to enter.

Scutt said he did not think ordinary metal detectorists would be naive enough to think it was acceptable or legal to use their detectors on scheduled monuments. “There seems to be a criminal element deliberately going on to our sites. We attribute the increase to organised crime … they are going for the goodies and they don’t care.”

Mark Harrison, the head of crime strategy at Historic England, said it was not a victimless crime. “We may never see or fully understand the objects taken or damaged because they have been removed from their original sites with no care or record as to their history or context.”

We can not state for definite that the illegal activities are not taking place. We can however offer an insight into reasons certain areas appear to have been excavated.

I spoke to a National Council for Metal Detecting officer regarding the recent article. Many individuals within the Metal detecting community believe that in this case, there is an air of being ill informed, hysteria or unfortunately, the potential this being fake news.

“From my experience this is diggings by animals such as badgers or rabbits considering the amount of partially vegetated upcast. Another photo i have seen elsewhere shows lines of digging along a wavy near surface tunnelling of a mole. This has then been dug into by a badger seeking the worm caches that the moles leave on their exploration. Moles will prey on worms that drop into the tunnels and paralyse them with a bite and stash them still alive in groups for later on.

Historic England must be contacted to put this forward as an explanation. I fear this is a bit of hysteria on behalf of inexperienced HE staff who have no actual knowledge of what a detector spade dug hole looks like. In reality a knowledgeable individual needs to meet with HE and discuss what evidence to look for and the Police should as a part of their investigations invite an experienced detectorists to analyse and comment on the evidence.”

As a metal detectorist and someone who has practised field archaeology in the past, I have actually seen first hand animal site contamination, which looks similar to holes dug by hobbyists. However upon further investigation and monitoring the holes and ground corruption has been proven to be due to animal behaviour as opposed to illegal practices.

A paper exists from 2004 concerning The effects of burrowing activity on archaeological sites: Ndondondwane, South Africa. Although not in the UK the paper discusses that Burrowing activity is a widely recognised source of site modification. This should be taken into account during all cases of alleged illegal metal detecting activities.

We have created a selection of web links regarding animal activity and burrowing, these offer a view of the holes and affected ground left by natural animal behaviour. There are other potential possibilities, I found the best archaeologists I have seen, are chickens. After leaving a site in North Wales, our return the next day was met with multiple new discoveries thanks to their scratching. And when on an archaeological site, who doesn’t check the animal holes? Please click on image to access the information. 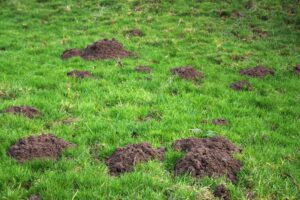 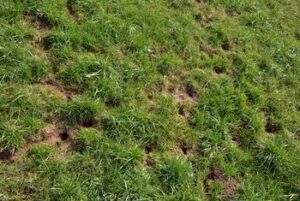 There is also the possibility that with the Treasure Act Review soon to be reported on, this could easily discredit metal detecting in the House of Commons or the Lords who will make the decisions on the future of the hobby in the UK.
The Revising the definition of treasure in the Treasure Act 1996 and revising the related codes of practice document by the Department for Digital, Culture, media and sport can be accessed here.
A news article regarding the revisions which was published last year, including NCMD quotes can be read here – Metal detectorists claim new Treasure Act will see them shortchanged
The reporting of alleged night-hawking activity could therefore be detrimental to the hobby. We ask that the relevant people be made aware of other circumstances which may mirror the effects of holes made while retrieving metal detecting finds.
And if you have been involved in illegal metal detecting practices. We implore you to reconsider your actions and adhere to the code of conduct set out by the National Council for Metal Detecting and also the Code of practice by the Portable Antiquities Scheme