Luds Church is a deep chasm penetrating the Millstone Grit bedrock created by a massive landslip on the hillside above Gradbach, Staffordshire, England, in a wood known as Back Forest, towards the southwest fringe of the Peak District National Park about 2.5 miles west of the A53 between Leek and Buxton. Over 100 m long and 18 m deep, it is mossy and overgrown, wet and cool even on the hottest of days.

It is believed that the chasm was considered by early Pagans to be a sacred place, most likely due to the phenomenon that reportedly occurs on that Day, at this time the sun shines directly into Luds church at midday on the summer solstice. If it is true then maybe that is how it got its name as Lugh (commonly anglicised to Lud, as in Ludgate in London) who was a Celtic sun god.

Luds Church was used by a dissenting religious group – the Lollards, followers of John Wycliffe, an early church reformer, who were condemned as heretics. They used it as a place of worship in the early 15th century. The Lollards also used Luds Church as a safe and secret hiding place. Luds Church may have been named after Walter de Ludank or Walter de Lud-Auk who was captured here at one of their meetings. A wooden ship’s figurehead from the ship Swythamley formerly stood in a high niche above the chasm, placed there by Philip Brocklehurst, then the landowner, around 1862. It was called ‘Lady Lud’ and was supposed to commemorate the death of the daughter of a Lollard preacher. Some have said that at one time a white wooden statue also known as ‘Lady Lud’ this stood in a high rocky cleft above the chasm.

Day trippers were charged a fee to visit Luds Church and hear Philip Brocklehurst’s legend of the Lady of Lud and see the figure of a lady clad in white nestling in the rocks of Luds Church and were led to believe it depicted Alice de Lud-Auk, the girl with the ‘unearthly voice’ who was shot and died here. It is said Luds Church is haunted by Alice, who was killed as soldiers raided the illegal gathering. Her ghost is alleged to frequent the place of her death.

There is a reproduction painting of an old picture postcard in the dining room at nearby Gradbach Youth Hostel showing a strange statue perched on one of the walls of Luds Church. It was noted after a visit to Luds Church in the 1930s, there was what looked like the figurehead from the ship Swythamley fixed to the rock just inside the entrance, apparently placed there by Brocklehurst, the land owner from Sythamley Hall, around 1862, which looked very similar to the female in the Gradbach youth hostel painting. A number of climbing routes up the sides of the chasm were pioneered during the 20th century but climbing is now discouraged so as to protect the lower plants that have colonized the damp rock-faces. 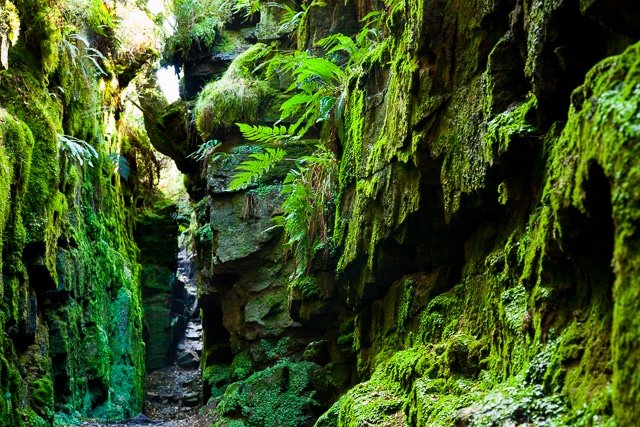 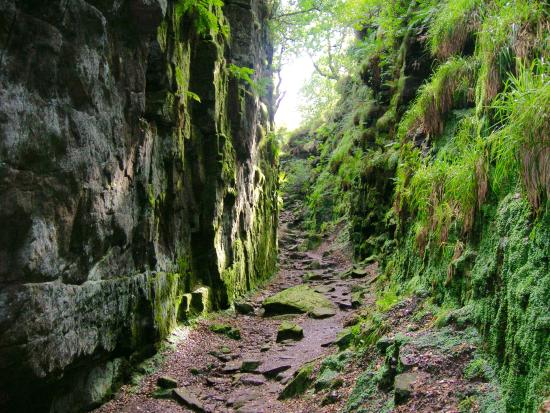 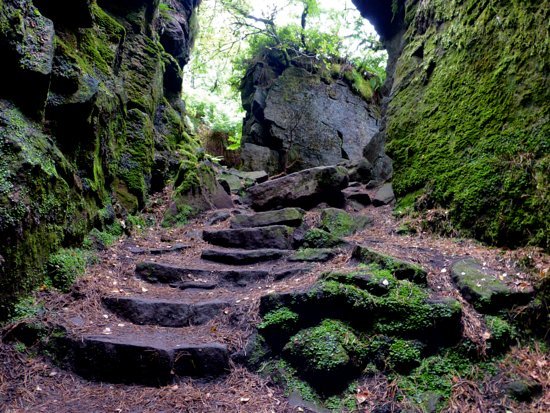 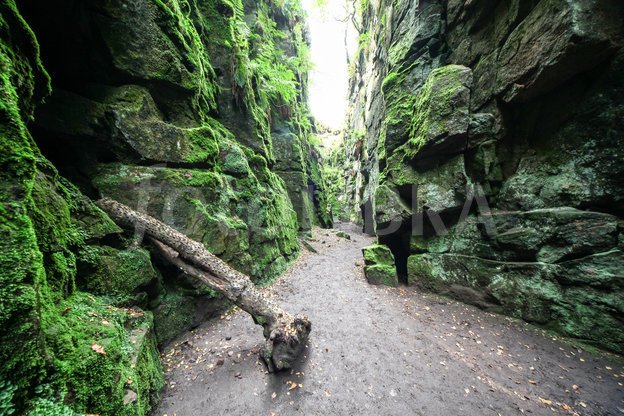 Robin Hood, Friar Tuck and Bonny Prince Charlie are all reputed to have hidden from the authorities within the chasm. Ralph Elliott, a local Luddite (known to be active in the area during the Luddite protests), and others have identified Lud’s Church as the Green Chapel of ‘Sir Gawain and the Green Knight’.

In the tale of Sir Gawain and the Green Knight, the stranger challenges the men of King Arthur’s round table to take a swing at him with their axe, so long as one year later the Green Knight is allowed to return the favour.

Sir Gawain took up the challenge and decapitated the Green Knight with one blow.  To his surprise, the knight picked up his head before reminding him of his promise that next year, it would be his head that would be struck by an axe.   Sir Gawain spends a year overcoming challenges to his chivalry and his pride before facing the Green Knight and only suffering a minor wound.

There is great significance in the story as Green in medieval England has many traditional meanings including youth, life and virility.  Sometimes the Green Knight is depicted as being the Devil, and sometimes as God or a Holy Spirit.  Sir Gawain’s shield is portrayed with a pentacle on it, the famous sign of the Devil.

Many believe that the story is not just an example of King Arthur’s strongest knight displaying the good and points of humanity but a moral point of the greatest of men being overly prideful  and confident in their own abilities.

Another legend has it that Luds Church was named after a horse: supposedly, a huntsman was pursuing a deer and as he followed it on horseback he was led to the chasm. The hunter failed to see the danger but his horse, Lud, did: when the rider went too close, the horse bucked and threw him to his death in the chasm.

In his Notes on Staffordshire Folklore in 1942. W. P. Witcutt wrote – The fairies were also associated with caves. One lived in Thor’s Cave, and a whole clan were to be found in the cavern beneath Luds church. Another indication of the profound history and folklore surrounding the area.

Whether Luds Church is the mythological place written about throughout recent and antiquarian history remains to be seen. This aside, what a place. And yes, there is a peculiar feeling at the location. There is a bit of a trek, so good walking boots and some supplies are necessary. But go to Luds Church, its well worth a visit… 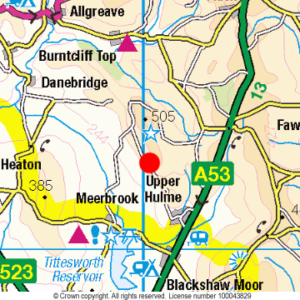 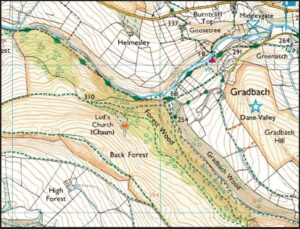 To reach it from Gradbach, park the car at the car-park and walk past the Youth Hostel and on downstream to cross a tributary of the Dane on a footbridge. Head uphill and then right, following a path towards Swythamley. At the top of the rise, turn sharp left to reach Lud’s Church after a further 200 metres or so. Descend into the first chamber, which does not seem so impressive – the immediate thought is ‘Is this all it is?’. Then follow the well-worn stone steps down into the main section, which immediately dispels any earlier sense of disappointment, for it is very tall and there is space for several hundred people here. It is possible to make an exit at the far end and follow a path back to the entrance.