The ancient city of Kaunos, which is on UNESCO’s World Heritage Tentative List, takes visitors on a journey going back 3,000 years with its rock tombs, 5,000-person theater, basilica, bath, agora and Temple of Demeter.

Located in the Dalyan neighborhood of Ortaca in the southwestern province of Muğla, Kaunos is able to be reached after a boat journey of around 10 minutes and a walk of 15 minutes on a tree-lined road. 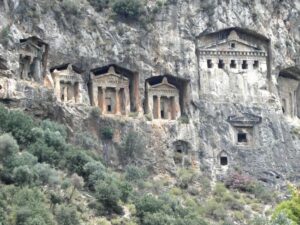 A number of rock tombs dating back over 2,000 years can be seen in the area leading to Kaunos, which is highlighted by the ancient theatre with a capacity of 5,000 people. It also hosts a basilica, bath, agora, 1,300 year-old mosaics, and ancient Temple of Demeter.

In its ancient heyday of the Lycian-Karia period, Kaunos was at the same time a harbor city, where salt production and trade was carried out. It was visited by around 40,000 tourists last year.

Speaking to state-run Anadolu Agency, the head of the Kaunos excavations, Professor Cengiz Işık, said it was among the most popular ancient cities in Muğla.

He said the city was established by one of Miletus’ twin children, Kaunos, on the border of Karia-Lycia, and was a harbor city in the ancient era. Today, however, it is located quite far within land inside the coast.

After the Lycian era, Kaunos was also settled in the Hellenistic, Roman and Byzantine eras before being abandoned. 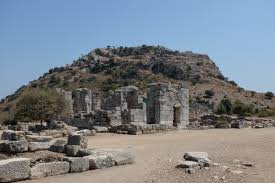 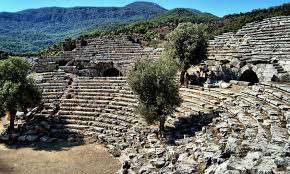 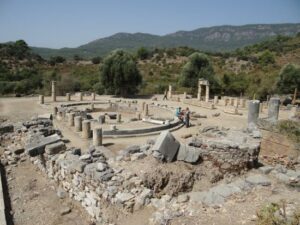 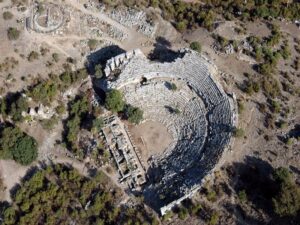 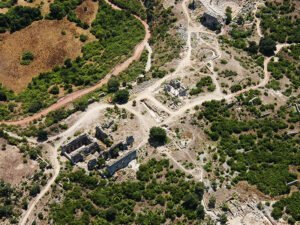 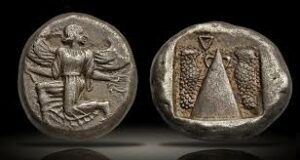 Silent witnesses of the past

Işık said the Kaunos rock tombs are “unique in terms of their structure.”

“Information and documents obtained during excavations at Kaunos shed light on unknown details in the science of archaeology. It is the most visited ancient cityin the area and the rock tombs here have been witnesses of the past for 2,400 years,” he added.

“Kaunos is not a place of huge marble structures like the ancient city of Ephesus. It is a modest city that used its own material, character and culture. That feature distinguished Kaunos from other cities,” Işık said.

Archaeological work and excavations at Kaunos started in 1966 and will be overseen by team members and technical personnel from different scientific branches again this year.

Işık stressed that different works including excavation, conservation and restoration, repair, experimental archeology, archeological park studies and arrangements would be carried out in the ancient city within a fixed schedule this year.

Archmdmag were on site at this location in July and August 2019.