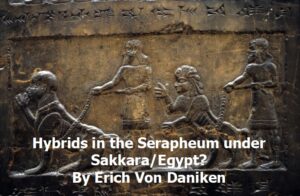 Around 300 BC, a high priest named Manetho lived in Sebennytos, a city in the Nile Delta. He wrote a three-volume work, which is now lost for the most part. How then do we know anything about it? We owe thanks to Bishop Eusebius of Caesarea for some reports of Manetho. Before dying in 339, Bishop Eusebius authored a “Chronicle” of history in which Manetho is quoted. [1]. In addition, there exist at least bits and pieces of Manetho’s writings. [2]. Manetho reported that gods and demi-gods once ruled Egypt. These reports tend to make Egyptologists cringe. Yet, the reports state that gods ruled for 13,900 years, and subsequent demigods reigned for another 11,000 years. Similar figures are also provided by Herodotus [3], Diodorus of Sicily, and Strabo. [4, 5]. Manetho’s writings tell us that the gods originally created various monsters and hybrid beings of all types. This is precisely confirmed by Bishop Eusebius:

“…and they produced double-winged beings…and more people with legs of goats and horns on their heads…And others, cloven hoofed – and more with horse bodies and human torsos…they have also wrought bull-headed men…and even other monsters…with manifold characters very different from each other…and many wonderful natures…whose images remain in the Temple of the Belos, one next to the other.” [1]

Heavy stuff. Were there really “double-winged people” in the world? Is it all nonsense? Why then are there reliefs on stelae and sculptures in all major museums staring back at us? There are also winged beings called Jinn to consider. As well as the “people with legs of goats and horns on their heads” that can be found on cylinder seals and temple walls. The same applies to the centaurs – the engineered half-man, half-horse race – or the men with bull-heads. Say hello to the monster from Crete, the Minotaur. But where are the mummies or remains of all these monsters? 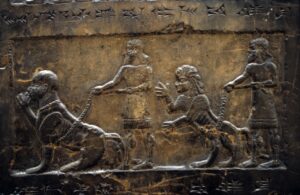 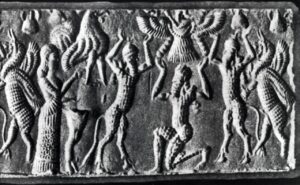 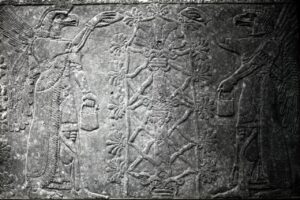 Nobody knows. But several sarcophagi found at various sites in Egypt held chopped up bones of different animals. Often, even the species of these remains could not be identified. [6, 7, 8]. In my book, The Eyes of the Sphinx, I address this controversy and also make it clear that no bull mummies were found in the Seraphäum, an underground facility at Saqqara. (P. 15: “The sarcophagus was empty…The 12 sarcophagi had the same oversized dimensions as the 12 in the first vault…Not a trace of magnificently interred bull mummies.” P. 19: “Not one contained the mummy of a bull.”) But the question remains: why did the priest break the bones of animals? Ultimately, their religion required the mummification of the whole body. Dismembering the bones would have been an outrage, a blasphemy. Why then were the hacked bones of multiple species placed in huge stone or wooden vats and often doused with bitumen (asphalt)? Such an approach would have made rebirth impossible. What was it all about? Unwanted bones from sick animals would have been left in the desert for the beetles or jackals. Even crocodiles would have been happy to help. Why bother with the sarcophagi? Perhaps they contained something that could never be allowed to reincarnate?

Were these hybrids? Were Manetho, Eusebius, and other ancient writers correct when they wrote that the gods had produced various monsters? Did they swarm up the Nile from Giza to Aswan like varying kinds of sphinxes? Were there hybrid beings – like those shown on the Black Obelisk of Shalmaneser III, located today in the British Museum London – commonly led on chains? But hybrids do not arise in any evolutionary way. If a perverted man had sex with a monkey, no hybrids would result because the chromosomes of the partners are too different. From this derives a single conclusion: if there were once actually chimeras, they could only be formed by genetic design. Today, every geneticist knows how that works, but the creation of hybrids is prohibited from ethical and moral perspectives. With a few exceptions.

Nothing helps: the ancient Egyptians did not master genetics. Those gods from outer space, however, did. And they had excellent motives for producing hybrids: chimeras on Earth would have needed different characteristics than on other planets. Also, they would have saved space in their ships by not transporting their hybrids when a few milligrams of DNA would be sufficient.

[4] Diodorus of Sicily: The Library of History. Translated by Dr. Adolf Wahrmund. Stuttgart 1866.