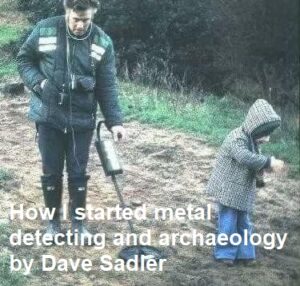 I was bitten by the detecting bug when as a 4 year old boy, I would go on many detecting trips with his Dad and Uncle. Here is my story.

How did I start metal detecting? That’s a question I’ve had to consider and look back at.

In the 1970’s as the image included attests, my dad – my hero, and my uncle both acquired metal detectors ( Yes that’s me in the flares and tartan!), visiting the beaches of North Wales and Anglesey and fields local to the area I grew up in Cheshire.

As Families, we all were involved having picnics and snake hunting. But for a 4 year old this new thing was mesmerising. My uncle claims still to this day, that one of my early words, which I repeated constantly was Archaeology. So my years growing up and having to visit historical locations, metal detect and play scrabble! Probably pointed me in the direction of Archaeology and Metal detecting.

When my dad passed away, his early C.Scope 600 was passed to me, at a time that I wasn’t really into having a hobby; it was left in my cupboard for many years.

Forward to the early 2000s. I was lucky to have a friend who knew a man who ran an archaeological group and acquired us an invite onto new dig. Wow, what an experience, I was actually practising what I always wanted to. I learnt a hell of a lot in a very short time, and inadvertently found a Roman road surface and a possible ‘Lost’ holy well. My friend was also a member of the West Kirby Metal detecting club. He was able to kit me out with a used machine and my adventure began.

As well as surveying the archaeological sites we were privy to via the archaeological group and he also had an agreement with the Gwynedd Archaeological Trust to Survey a site on Anglesey in North Wales. Throughout this period I also utilised my dad’s early C.Scope 600. We were able to discover many items on all sites which added to the historical story of each location. Some of which were put on show in Lllangollen museum in North Wales.

Unfortunately at this point, several things in life occurred which made me unable to participate in my hobbies, and I sold my used machine and lost my Dads C.Scope whilst moving home.

Cue the early 2000’s. One of my friends with his Whites metal detector, was invited to survey a site, currently undergoing an active dig, under the management of archaeologist – Mark Olly. I was able to acquire a cheap Garrett metal detector and joined my friend on site. Quickly this developed into us becoming part of the Celtic Warrington Project archaeology group and join in the excavations on a site at Llanarmon yn Ial in North Wales. I was also invited to join the team at sites at Appleton Thorn and Manley in Cheshire, being able to survey both sites with my Garrett as well as site excavations. These were tremendous times where I learnt much about actual archaeology and have access to important sites to hone my metal detecting techniques, while offering important information to the Archaeological context with the discovery of historical metal finds.

Life continued to get in the way until 2013. Via another group in a different subject, I met the landlord of my local pub. Graham was a metal detectorist, and with his pal Dave, generally sat at the end of the bar sorting finds. And again I was engrossed. I kept asking Graham to form a group, and received a surprise on my 40th Birthday of a brand new machine. Off I went to Graham and a brief conversation was had and Tempus Metal detecting and Archaeology group was formed. My initial idea to cover both subjects and help bridge the gap between them.

I had a great few years, discovering many artefacts, upgrading machines, making new friends and organising charity events. Again life intervened and from a period of depression, I found my therapy swinging my coil. But my mind was not occupied and I wanted to do more.

On March 1st 2016 the Archaeology and Metal Detecting magazine was launched, and something very dear to me was created.

I have made a lot of friends and met a lot of people via the subject, I have been privy to some amazing artefacts being discovered and myself found items of consequence.

Life and health recently again intervened, but although I am sometimes unable to be actively involved, my Dad, my uncle, an old C.Scope 600 and a lot of luck have given me a future filled with possibilities within the historical world.