A very rare gold bulla was found with a metal detector

According to the official information only in 2017, there were registered about 78000 archaeological finds in Great Britain.

Part of them was categorized as treasures (gold or silver objects more than 300 years old).

Surprisingly, 93% of these were found using metal detectors. The number of people using various kinds of metal detectors is increasing, and it leads to the fact that museums get even more treasures than before.

This way, an old massive gold decoration was discovered; it was made by an ancient craftsman thousand years ago.

In Great Britain, in the wetlands of Shropshire, a unique gold bulla made in the Bronze Age was found. 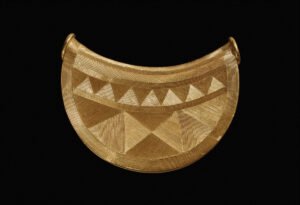 It appeared that the discovery was made not by professional archeologists, but by an ordinary English treasure hunter, who was metal detecting in Shropshire Marches. This happened in 2018, but it has been a secret up to a certain time.

British Museum has bought a pendant made in 1000-800 century B.C.E. Neil Wilkin, a curator of the Bronze Age section in the British Museum, after he saw the pendant said that, he’d dropped everything and hurried to see the pendant. He was overwhelmed, excited, and he couldn’t believe his eyes. That was the most important artifact of the Bronze Age.

This bulla is one of the eight relics of this kind that have ever been found on the territory of Great Britain and Ireland. At that in England, only one such bulla was acquired.

It happened in 1722 while digging a channel in Manchester. It was described several times by the contemporaries. In 1806 the pendant dispersed, and until now, its location is unknown.

Since a private person acquired the object, it had to be bought out. National Endowment for the Arts and American sponsors of the British Museum funded this buying. The price of the gold artifact with solar signs was 250.000 pound sterlings.

This refined piece of jewelry was found in such good condition, that the owner of the finding initially thought it was some Art Deco-inspired decoration made in the 1930s. The bulla looked astonishing, and everyone could only admire the craftsman’s skills.

The relic was made in a half-moon shape with V-shaped sides made from two soldered overlays of gold between which one could insert a chain.

Each gold overlay was covered with geometrical pattern engraving. Scientists say that the geometric figures are so precise that it seems that the craftsman was using an alidad to make them. At that, there are no signs of marking on the bulla surface, unlike other bullae found. However, the one who engraved this bulla made a perfect pattern with proper angles.

Such an engraving technique is also encountered on such relics as Trundholm sun chariot in Copenhagen and on the pendants found earlier in Ireland. 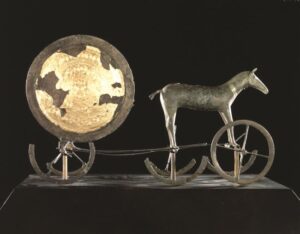 Besides, this pattern made of alternating lines that go vertically, horizontally, round, and diagonally creates incredible effects of light. The complex pattern makes sunlight reflect from the gold surface and create various color shades. The experts say that here we can see craftsman’s skills of the highest possible standard.

Since November 2020, the finding of the English treasure hunter who wished to stay anonymous will be on exhibit in Shrewsbury Museum and Art Gallery, not far from the place where the relic was found. In 2021 it will be taken to the British Museum in London.

Thanks to Peter for offering his work to the Archaeology and Metal Detecting Magazine for publication.