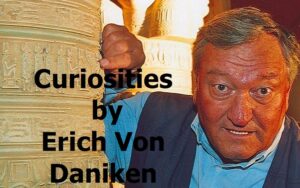 For 45 years, I have maintained a squeaky-clean archive. Therein is a section with the keyword “Curiosities.” For my new book, Impossible Truths [1], recently released by Kopp Verlag, I fished a few examples from this collection of impossibilities.

The great sand sea of the Saad Plateau is located in south-western Egypt. Since 1932, curious pieces of money-green glass have been repeatedly discovered. Men call these anomalies Libyan Desert glass. In July 1999, the British magazine New Scientist wrote that over 1000 tons of the strange material have surfaced to date, the largest single piece weighing 26 kilos. Initially, they suspected the glass must have been created by a meteorite impact. But no trace of a crater could be found in the vicinity. Similarly, even if the hot gases of a celestial body crossed the area without impact, there should still be some traces, furthering the riddle. For this to have occurred, locations of desert glass would be more or less on a straight line. But they aren’t. The glass is comprised of 97% Silicon, and looks like a green-blue gem. In an analysis published in the scientific journal Nature, the geologist Dr. Spencer said: “It’s easier to assume that the stuff fell from the sky.” [2].

A mystery of a different kind is located in Patagonia/Argentina. There, located in the Deseado Department, south of the village of Fitz Roy, lies a strange National Park called the Monumento Natural Bosques Petrificados de Santa Cruz. At a typical National Park, you expect really splendid landscapes, snow-capped mountains, blue lakes, and bizarre rock formations. But you will find nothing like that at the Bosques Petrificados. This is a petrified forest. Not a forest as we imagine it, for though the area is filled with tree trunks – all of them are petrified. Experts estimate this petrified forest to be about 70 million years old. There is a perfectly natural explanation for these fossils. Tens of thousands of years ago, the cellulose of the wood turned to stone because the trees were pelted by volcanic ash and stopped receiving air. The length of isolated trunks can be up to 50 meters, with roots still in the ground. Some fragments, however, remain mysterious. They lie around the forest in eight or 12 equal cut blocks. The cracks through the stems appear in a manner that looks like they have been separated with a saw. Usually, the stems can be seen splitting into the wind, while fragments of differing density are distributed throughout the trunks. Regarding adhesions, grain patterns, and knots in the growing branches – none of these features interface with the petrified trees. Also, the individual pieces are often the same length. Who was capable of such sawing millions of years ago? 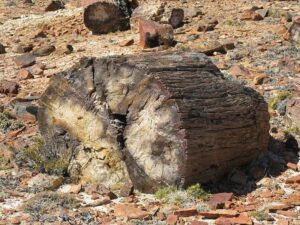 In the early 1970s, the Russian geologist Dr. Nikolai Gontscharow from the Moscow University of Arts and Industry worked on a cultural atlas of the world. As he stood in front of the finished work, he said it looked like the five-sided pieces of a leather football. The markings of important sites of all cultures revealed the impressions of a multi-cornered football, where the cut lines resembled the seams of a football and ran along five corners. A Russian newspaper, Kosmosomlskaya Pravda, wrote:

“Many ancient cultures had no random location, but were exactly at the intersections of this system. So it was with the Indus Valley civilization of Mohenjo-Daro, Egypt, Northern Mongolia, Newgrange in Ireland, Easter Island, Peru, and even Kiev, the mother of Russian cities. Along the seam where the gigantic plates collide, stretched the petroleum areas of North Africa and the Persian Gulf. The same thing is observed in America from California to Texas.” [3]. 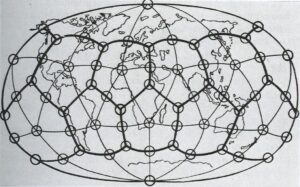 The network showed ghostly sections, where so far no artefacts have been encountered. So the distance of Nazca in Peru to Giza in Egypt is the same as the one from Teotihuacan in Mexico to Giza. And Angkor Wat in Cambodia is located equal distance from Mohenjo-Daro to Easter Island to Nazca. Was there X-millennia ago – I dare not even attempt to use figures – something like a Global Planning Committee? Determining where groups of people had to settle? Were the oldest cultures intentionally situated on points that had everything to do with resources such as petroleum, minerals, etc.? Who commanded these people? For what? And when in the course of time will we admit that these phenomena have taken place, even though they seem like a fairy tale? Does humanity have a legendary past behind it?