I have always found hedge rows of some interest whilst metal detecting. It’s a place where we can have a rest, enjoy a quick cuppa, or take immediate shelter when that surprise rain storm appears out of nowhere. Some of that questions I pondered upon were, Why are they there? How old is this hedge row? What type of hedges are planted? How old is this hedge row? After reading many articles, speaking with farmers across the greater United Kingdom, and a lot of infield self education, I have come up with several answers and concentrated my findings within this read. I am certainly not a horticultural expert by any means, but with curiosity comes self enlightenment. Hopefully some of this will shed light on these wonderful  barriers and you can look at them in a different perspective.

Let’s start at the beginning, when the land was rife with invading foreign occupation and domestication. Typically from the Bronze Age to Roman times mostly stone was used to create borders, enclose living areas and create some type of defence against enemies.  Time went on people and found it easier to replace these with hedges. Hedges were easier to produce, less manpower was needed to build them, and they could further separate larger areas into smaller ones without the use of the other, heavier and hard to collect natural resource, stone and rocks. This change occurred during the Dark Ages when most of the country started seeing open fields popping up all over the land for agricultural reasons. Anglo-Saxons were big on planting hedges.  Hedge rows could easily separate who owned what parcel of land, stop erosion of the upper nutrient rich soil levels, and separate herds of livestock from crops so they would not be eaten. As the modern saying goes, good fences make good neighbours, that saying applied back then as well. From my research, the open field ideal became very wide spread in the early 1600’s as population explosions fuelled creating hedged borders. This was, at the time highly illegal, as people were basically making up their own property lines, which in turn caused huge feuds amongst families, neighbouring lands, and the government itself. 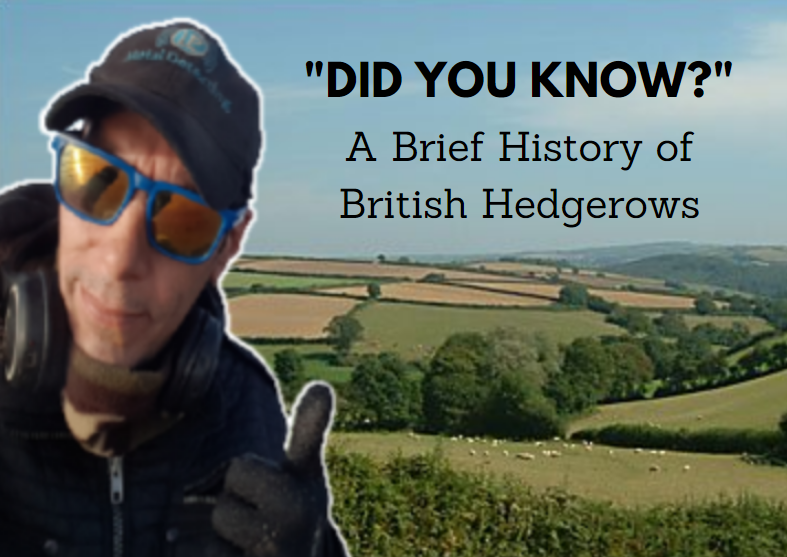 Dating a hedgerow seems rather easy, but there are certain variables that can discount actual age, such as vines.  With Hawthorn as the main hedge used in rows originally, you will probably find this first.  You should usually start by focusing at the middle area of a row, as ends of hedge rows may encounter wild additions of flora growing there. The main rule of thumb is for every thirty metres, or let us say almost one hundred feet, you should count the number of woody species identified. For each species add 100 years. You may have seven species, therefore that hedge row will be 700 years old. A 1,000 year old hedge may contain 10 or more. There is a huge variety of other hedge that may develop within one row over time, due to the spread of seed by birds and animals. Look in rows, detect rows.

Many hedge rows are now protected under law, but they are diminishing due to disease, lack of maintenance, and modern use of mass produced wired fencing as a replacement. There are 500,000 miles of protected hedge rows in the United Kingdom stated in a recent government publication.  Even birds and their nests that dwell within are all protected by law. Hedge laying is a lost art, but there is a society of people that do continue to keep this practice alive with mentorship. It’s not too late for any of us to learn, before it is lost forever.

I ask you, what does a hedge row mean to you as a metal detectorist? Through experience having sat in those hedges to cool off on a hot day, and walked past them seeing many strange things around at the rooted bases. I concluded that these places can be excellent areas to detect. One example is I once found the remnants of an old stone building that was dismantled and discarded by a hedge. This lead me to seek out where it came from, as it was clearly from that immediate field. I researched this field for anomalies on Lidar and discovered symmetrical shapes in the earth nearby. These areas in turn produced some amazing artefacts and coinage allowing me to date the pre existing structure, and gave me an idea of what else could be found from that era.

In close, just remember, you may chuck that lump of rusty iron over your shoulder yelling “hedge fodder!” but it might very well be landing near something for which you endeavour and seek. Remember to check those hedgerows, give them a swing with your coil, because you might be amazed at what you may find. There is more to a hedge row than meets the eye, it is British history at your fingertips, right there on your very own permission.

To offer any of your own words for publication. Contact editor@archmdmag.com