What was your first Metal detector survey results

A few months we shared an image of a number of Metal detectors and asked the question “what was your first metal detector?”

This survey was seen and responded to from people around the world. The UK, USA, Poland, Germany, Holland, France, the Philippines, Australia, New Zealand, Thailand, Russia, China, Japan and many more readers commented on their initial machines.

Most of the machines we know reasonably well, some we had heard of, but many, we had to Google to learn about them, as we had never heard of them at all. When we list the complete list, click on the name and we hope this will lead you to the company or information about the machine.

The top half of the list is made up of the better known manufacturers although this is broken up by Maplin and unknown machines purchased from Amazon. We were surprised to see that 4 machines were actually own builds by readers with electronic plans. We did ask for feedback on the machines ability, 1 gentleman responded. The user lived in America and did find many coins and artifacts. Proof that you have to go over it to find it.

Thank you to all readers who responded to the question and participating in this survey.

Amazon 42 (machine unknown or own brand from Amazon)

Now. These figures are only a fraction of the tens of thousands of Metal Detectorist’s and those who no longer participate around the world, but it does give a brief overview of the most common first machines used around globe.

We have broken down the figures into percentages. The Top fifteen show the markets first metal detectors bought value. Remember, this is for the first machine bought by an individual, not any machine or current machine bought, as many users move on to different manufacturers and more expensive brands.

We must also remember that many of these brands are now unavailable, some detectorist’s have been involved in the hobby for 50 years and many manufacturers do not now exist.

We have constructed 2 pie charts with all Market values and percentages from all data collected in the survey. 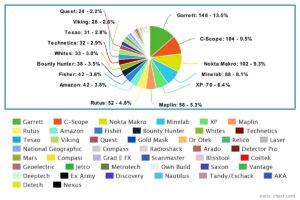 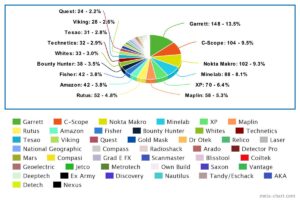 Thank you all for the responses and discussion involved in this survey. Feel free to add your first machine in the comments below