Ten miles north of Dahlonega, GA, at the intersection of US 19 and State Road 60, you’ll come up to a roundabout with something odd in the middle: a big stone pile inside a triangle! It’s known as the Stone Pile Gap & it has quite a story!

“This pile of stones marks the grave of a Cherokee princess, Trahlyta. According to legend her tribe, living on Cedar Mountain north of here knew the secret of the magic springs of eternal youth from the Witch of Cedar Mountain. 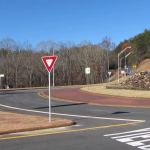 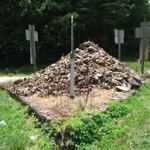 Trahlyta, kidnapped by a rejected suitor, Wahsega, was taken far away and lost her beauty. As she was dying, Wahsega promised to bury her here near her home and the magic springs. Custom arose among the Indians and later the Whites to drop stones, one for each passerby, on her grave for good fortune. The magic springs, now known as Porter Springs, lie 4 miles northeast of here.”

According to lore, the Georgia Department of Transportation has tried to remove the stones on more than one occasion during road construction. Supposedly each time it happened, at least one person died in accidents while moving the pile, leading many to believe that removing a stone from the pile will bring the curse of the witch of Cedar Mountain upon the thief, so only recently they decided to do the next best thing; build a roundabout around the stone pile!