Skip to content
Home→Historical, History, Mythology and Folklore→Thomas Francis and the puzzle stones.

Thomas Francis and the puzzle stones.

For around 6 years I lived in Bebington, Wirral. Being me I had to know all the local history and mysteries of the locality. One of the first I discovered was that of the Thomas Francis puzzle stones.

For many years a house at the bottom of Heath road in Bebington, Wirral, confused and yet intrigued passersby.  The house was notorious with the locals and many had mixed views on the man whom resided there.  He was Thomas Francis, an eccentric and fun loving gentleman.

“In the village of Bebington we saw a house built in imitation of a castle, with turrets in which an upper and under row of cannons were mounted.  On the wall there were eccentric inscriptions cut into slabs of stone, but I could make no sense of these.  We peeped through the gate and saw a piazza beneath which seemed to stand the figure of a man.  He appeared advanced in years, and was dressed in a blue coat and buff breeches, with a straw hat on his head.  Behold too, a dog sitting chained.  Also close behind the gateway, was another man seated.  All were images, and the dwelling with the inscriptions and queer statuary was probably the whim of some half crazy person”.

Thomas Francis was born in 1762 and lived in Bebington for many years.  He was a man and made his money from stone masonry and contractors.  His warped sense of humour impressed many, and yet angered just as many.  He would often play tricks on people, and enjoyed seeing the reaction of people in certain situations.  He would invite guests to his home in promise of a large banquet.  He would seat them at a table covered with huge silver tureens.  Then when his guest were starving and rubbing their hands with delight, he would whip off the tureen to reveal a tiny trussed sparrow in each.

Locals also knew of a strange ritual he would perform each year.  After ordering 2 wooded coffins from Mr Walters in Birkenhead he would spend each birthday reclining in the coffin.  He insisted fully that his wife must join him in his charade.  Thomas Francis even refused to pay Mr Walters for the coffins, arguing that the job was not completed until the lid was screwed down!! He had a strange fascination with death, and unlike many he seemed at ease with it.  He was the first person in Bebington to get permission from the rector to dig his own grave.  The residents at the time reported seeing him at the weekend cleaning and sweeping out his grave, and then relaxing in it smoking a fine cigarette.  It was for quirks like this that Francis became a synonymous resident of Bebington.

His house was a clean and neat home, no work was left unfinished and all parts of it were maintained all year round.   In line with his sense of humour, he decided to mount cannons on the turret of his home.  What was more interesting is that he did this at the beginning of the 19th century when Napoleon had threatened to invade. Despite this being another practical joke by Thomas’s the Martello tower commanded a good view of the road from Birkenhead and would have made a good strategic point.  Luckily for the residents, the guns that Francis hoisted up were only made of wood.

Upon setting foot into his house into the porch way you would notice a large sculpture made by himself.  The sculpture was of a large figure almost certainly representing himself and a woman drawing water, and finally a small steam ship.  Below the sculpture were the words:
“The people of Bebington murmured for want of water; I cut the rock; an god gave them plenty”.

This is said to be refereeing to a well to which Francis allegedly gave the general public the use of.  However today no existence of the well has been found.  The steam ship in the sculpture shows us that this must have been made in the late part of his life, as steam ships didn’t appear until 1815.

However all of the above is not the reason why he is remembered.  The most interest arose from the wall puzzles which Thomas Francis inscribed into the walls of his house.  They give us a much greater detail of his complexity and the state of his psyche. 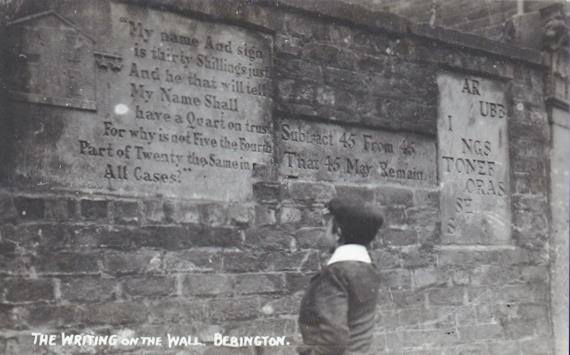 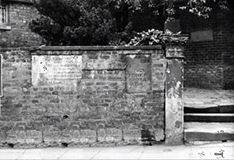 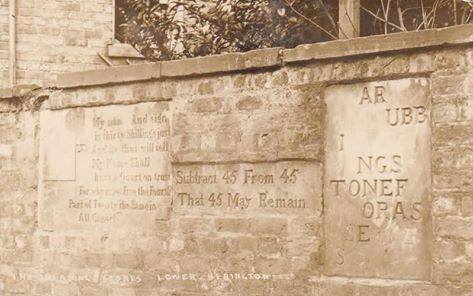 The first puzzle /and most recognisable is a disjointed inscription which reads:

“A rubbing stone for asses”

Thomas inscribed the words into outside wall of his house.  His purpose was quite practical.  He put up the rubbing stone to rid himself of the worry which anyone can understand who has lived in one of those old country towns where window sills in the lower storey, right on the pavement, invite noisy talkers to take a seat and ‘argue’.  The loungers of Bebington, strong in their right to say what they pleased and where they pleased, leaned against the brick wall of the little forecourt, chattering noisily.
It is a problem that many modern people have today except this time it is usually by drunken yobs or teenagers looking for somewhere to gather.  It has also been suggested that when the gaps are filled in they create an inscription of a genuine raid by the plunderers Ingvar and Hubba of Bebington, resulting in them being driven out by inhabitants. There is no evidence of this however.

Another stone reads: SUBTRACT 45 FROM 45 THAT 45 MAY REMAIN.  The way of solving the mathematical problem is to write the figures 1 to 9 in reverse order, over the same figures in ordinary order and subtracting the two lines.  Mathematical problems were something that Thomas excelled in.
Another famous puzzle begins, “From 6 take 9, From 9 take 10, From 40 take 50, and 6 will remain”.
The answer being that if “six” is spelt, and Roman numerals are substituted for the remaining figures, the puzzle is solved. IE

Another slab is carved with a representation of a small inn from which hangs a sign which is unknown in the district, the Two Crowns, with these words:

“My name And sign is thirty shillings just, and he that tell My Name shall have a Quart on trust, for why is not five the fourth of twenty the same in all cases?”.

The explanation is as follows.  The values of a mark and a noble were 13/4d and 6/8d respectively, and two crowns equalled ten shillings.  Totalling these three we get thirty shillings.  The inn keepers name was Mark Noble, and the inn was called the “Two Crowns” which is where we get the 30 shillings just from.

The original worked stones consisted of several sandstone blocks with carved inscriptions set into a wall adjoining Thomas Francis’ house (now demolished).  They were later moved into one of the boundary walls of the adjoining Mayer Park but suffered badly from weathering of the lettering.  They have since been moved into nearby Bebington Civic Centre where they have been built into a low wall in the Library Foyer. Sadly, none of the images I took are available to me, so you will have to visit, as none seem to be online either.

Despite his morbid fascination with death Thomas Francis lived an extremely full life and managed to avoid death for 87 years.  One can only imagine what this eccentric character would have said to Saint Peter when he reached the gates of heaven.  Thomas Francis died in 1850 and is buried in the nearby church yard at St Andrews