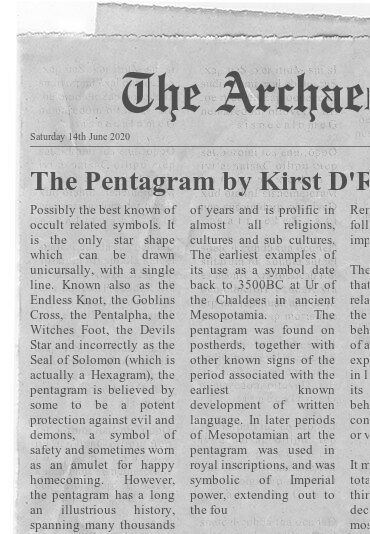 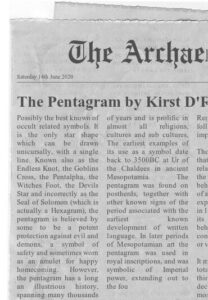 Possibly the best known of occult related symbols. It is the only star shape which can be drawn universally, with a single line. Known also as the Endless Knot, the Goblins Cross, the Pentalpha, the Witches Foot, the Devils Star and incorrectly as the Seal of Solomon (which is actually a Hexagram), the pentagram is believed by some to be a potent protection against evil and demons, a symbol of safety and sometimes worn as an amulet for happy homecoming. However, the pentagram has a long an illustrious history, spanning many thousands of years and is prolific in almost all religions, cultures and sub cultures.

The earliest examples of its use as a symbol date back to 3500BC at Ur of the Chaldees in ancient Mesopotamia. The pentagram was found on postherds, together with other known signs of the period associated with the earliest known development of written language. In later periods of Mesopotamian art the pentagram was used in royal inscriptions, and was symbolic of Imperial power, extending out to the four corners of the World.

The supposition that the pentagram is a mystical figure stems from the fact that the pentagram is a five pointed star. The number five is considered to have mystical associations because it is a prime number – the sum of three and two and also of one and four. Christ had five wounds (allegedly) if you don’t count the wounds inflicted by the crown of thorns, and He distributed five loaves to five thousand people. Also we have five fingers, five toes and of course five senses. The top point of the pentagram is said to represent the human head, or a non human spirit, to invert the pentagram is considered a sign of relegating spirit to the bottom of the metaphysical ladder.

Other beliefs state that to invert the pentagram is symbolic of Satanism and on a par with such mockeries as saying the Mass backwards or inverting the cross. To the Wiccan believer, the five points represent the Wiccan sacred elements of air, earth, fire, water and spirit, and the pentagram is usually enclosed in a circle to represent eternity. The symbol is inscribed on the ground, and must point North (to point South would mean you were a worshipper of Satan) Worshippers would then stand within the enclosed pentagram to invoke occult powers. 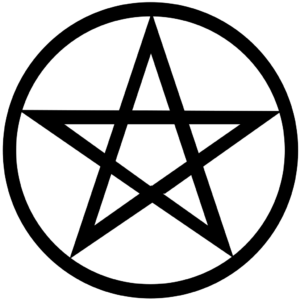 Amongst the Hebrews the symbol was ascribed to Truth, and to the five Books of the Pentateuch.

In ancient Greece, the pentagram is referred to as the Pentalpha, as it is geometrically composed of five A’s. The geometry of the pentagram and its metaphysical associations were explored by the Pythagorians (after Pythagorus 586-506bc), who considered it an emblem of perfection. The pentagram was then passed down, along with other discovered knowledge of geometric figures and proportion into Hellenic art, and can be seen as the Golden Proportion in the design of some temples. Early Christians believed the pentagram to represent the five wounds of Christ, and from early Christianity until Medieval times it was a lesser used Christian symbol. Prior to the Inquisition, the pentagram had no evil associations and was viewed as a symbol of truth, religious mysticism and the work of the creator.

The Emperor Constantine 1 who, after gaining the help of the Church in his warlike and religious  takeover of the Roman Empire in 312ad, used the pentagram, together with the chi-tho symbol (a symbolic form of cross) in his seal and amulet. However, it was the cross, which is a symbol of  suffering, rather than the pentagram, symbol of truth which was used to symbolise the Church which subsequently came to power, and whose manifest destiny was to usurp the supreme power of the Roman Empire. The annual feast of Epiphany, which celebrates the visit of the three Maji to the infant Jesus, as well as the Churches mission to bring Truth to the Gentility, had the pentagram as its symbol, however the symbol has now been changed to a five pointed star in reaction to Neo- paganist use of the pentagram.

In the Legend of Sir Gawain and the Green Knight, the pentagram was Sir Gawains Glyph. Inscribed in gold on his shield, and symbolising the Five Knightly Virtues – generosity, courtesy, chastity, chivalry and piety. Medieval times again saw the pentagram, as a symbol of truth, and was thought to be a protection against demons. Now known as the Endless Knot, It was used as an amulet of personal protection, and to guard windows and doors. At this time, the pentagram with one point upwards symbolised summer, two points upwards symbolised winter.

During the Inquisition, propagation of lies and accusations in the interest of orthodoxy and Roman Empire limination of heresy was prolific. The Church began a long lapse into the evil and diabolic practices it claimed opposition to. These were dark times when to hold skills in herbal remedies, midwifery or to worship the Old Religion would bring even the most respected community members to a very sticky demise. The church viewed the pentagram as symbolising a goats head or the Devil in the form of Baphomet, and Baphomet was the idol the Church accused the temples of worshipping. The Pagan witches, particularly the higher and more learned amongst them attracted the attention of the Dominicans of the Inquisition, who began their deadly purge, and other horned gods such as Herne and Pan became associated with the Devil, which incidentally is a Christian concept. The pentagram, which until now had been the folk symbol of security now became associated with evil, and became known as the Witches Foot. The Old Religion went underground, still practised under strictest secrecy, and remained there for hundreds of years, hiding from the paranoiac eyes of the Church. 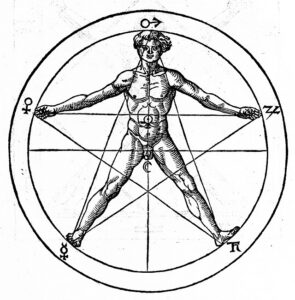 During the birth of Hermeticism, the protoscience of alchemy developed along with its occult philosophy and cryptical symbolism. Graphical and geometric symbolism , not explored since the Ancient Greeks began to develop in its importance, and secret societies of scholarly men and craftsmen began to form. These men believed in the concept of the microcosmic world as analogous to the macrocosm. Western occult teaching began to embrace the Eastern philosophies of Spirit and Matter, and the pentagram was used to symbolise man within the microcosm or the Macrocosmic Universe. In Freemasonary, Man as microprospus was and is associated with the five pointed pentalpha, and as such was used as the symbol of the Sitting Master of the Lodge in its upright form. The Masons, with their appreciation of geometric form and structure, symbolically incorporated the Endless knot into the 72 degree angle of the compasses, the Masonic emblem of virtue and duty. The womens branch of Freemasonary also uses a pentagram as their emblem, this one the Eastern Star displayed two pints upwards, each of the five points commemorating a Biblical heroine.

The first graphical illustration associating the pentagram with evil appeared in the nineteenth century. Eliphaz Levi, the pen name of Alphonse Louis Constant, a defrocked French Catholic Abbe, illustrates the upright pentagram of Microcosmic Man beside an inverted pentagram with the goats head of Baphomet. This juxtaposition led to the concept of the different orientations of the pentagram symbolising good and evil.

In the 1940s the pentagram appeared again in its inverted form in the hands of Gerald Gardner, who adopted the symbol as the sigil of second degree initiation in the newly emerged Neo-Pagan movement of witchcraft later to become known as Wicca, but it wasn’t until the 1960s that the pentagram again began to appear as an amulatic symbol to be worn. An upsurge in witchcraft and occult related publications at this time is thought to have propagated the establishment of the Satanic cult The Church of Satan, by Anton La Vay. For its emblem the cult adopted the inverted pentagram and Baphomet image used by Eliphaz Levi. The reaction of the Church was to condemn as evil anyone who took the pent alpha as a symbol, and even to condemn the symbol itself, much like the post war attitude to another ancient ancient symbol, the swastika, or sun-wheel.