The straits of Malacca near Sumatra have long borne witness to the passage of trading ships. Ivory, fabrics, perfumes, glassware and precious stones have passed through the strait’s Pacific waters, stowed in countless cargo holds, eventually to settle in far flung places around the globe.

Over the centuries, most of these merchantmen reached their destinations safely. However, the quiet peace was broken one day in June 1947 when a forbidding SOS message drifted across the airwaves: “All officers including captain are dead lying in chartroom and bridge.” read the message. “Possibly whole crew dead.”

This was followed by some indecipherable Morse code chatter, probably more SOS signals, and then one final grisly message… “I die.” And then, silence.

The macabre distress call was picked up by numerous ships and Dutch and British listening posts who, through triangulation, identified the vessel as the Dutch freighter SS Ourang Medan and located its approximate position within the straits of Malacca.

Of the two American merchant ships that heard the Ourang Medan’s grim message, the 6,507tn Silver Star was the nearest and she raced to the aid of the stricken vessel. Within a few hours, The Silver Star arrived upon a hushed sight. 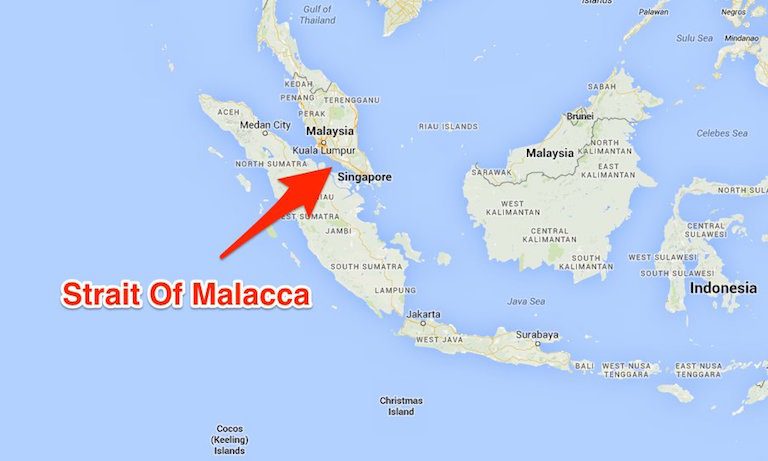 The calm sea gently lapped at the Ourang Medan’s stationary hull and the crew were nowhere to be seen above decks. The American ship hailed the Dutch vessel with whistles, calls and hand signals but there was no response.

Nothing on board the strange craft moved. A boarding party was quickly assembled and what they discovered was such an alarming sight that it has made the Ourang Medan one of the strangest and disquieting nautical mysteries of all time, eclipsing even the Marie Celeste in macabre detail if not in infamy. 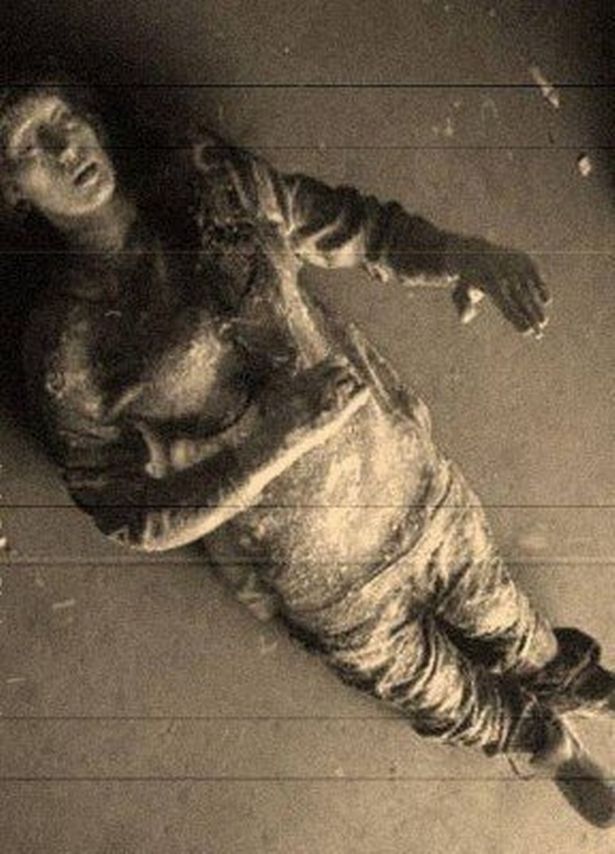 The SOS message proved correct; every member of the Ourang Medan’s crew lay dead. The crew’s corpses lay scattered on the decks. The captain laid dead on the bridge, his officers in the wheelhouse, chartroom and wardroom all deceased. More than this, their eyes were still open, faces upturned towards the pitiless sun, some with outstretched arms and expressions of sheer terror upon their features.

As a May 1952 report of the Proceedings of the Merchant Marine Council put it: “their frozen faces were upturned to the sun, the mouths were gaping open and the eyes staring…” The Silver Star’s boarding party noted that even the ship’s dog was dead, its face locked in a tormented grimace that mirrored that of its masters’.

A trip to the communications room revealed the author of the SOS messages, also dead, his hand still on the Morse sending key, eyes wide open and teeth bared. Strangely, there was no sign of wounds or injuries on any of the bodies.

The decision was made to tow the mysterious ship back to port but before they could get underway, smoke began emanating below decks, probably originating in Number 4 hold. The boarding party hurriedly returned to The Silver Star and barely had time to cut the tow lines before the SS Ourang Medan exploded with such force that she “lifted herself from the water and swiftly sank”.

To this day, the exact fate of the Ourang Medan and her crew remain a seemingly impenetrable mystery. Speculation has been made that pirates killed the crew and sabotaged the ship, although this doesn’t explain the peculiar grimaces and lack of injuries on the corpses.

Others have claimed that clouds of methane or other noxious natural gases could have bubbled up from fissures on the sea bed and engulfed the ship. Even more fantastical theories involving aliens and ghosts abound.

A CIA memo from 1959 detailed the eerie “frenzied” SOS call from on board.

“All officers, including captain dead, lying in chartroom and on bridge… probably whole crew dead,” the call said.

Written by C.H Marck Jr, assistant to the Director of the CIA Allen Dulles, in 1959, to an unknown recipient, the memo continues: “There followed a series of indecipherable dots and dashes and then came quite clearly: “I die“.”

“There wasn’t a living creature on the ship,” it said.

“The captain lay dead on the bridge. The bodies of the other officers sprawled in the wheelhouse, chartroom and wardroom.”

“The faithful ‘sparks’ was slumped in a chair in the radio shack, his hand still on the sending key.”

“The bodies of the crew lay everywhere, in the rooms, in the passageways, on the decks.”

“And on all the dead faces was a look of convulsive horror.”

Referencing a report by Merchant Marine Council, C.H Marck Jr added that their frozen faces were upturned to the sun with mouths open and staring eyes.

The ship’s dog, a small terrier, was also dead with its teeth bared ‘in anger or agony’.

The boarding parties decided to tow the vessel to port to continue investigations, but, according to the memo, “at that very moment smoke and flames belched forth” from the hold.

They abandoned the ship and there was an explosion, before it sunk without trace with all the dead crew, never to be seen again. 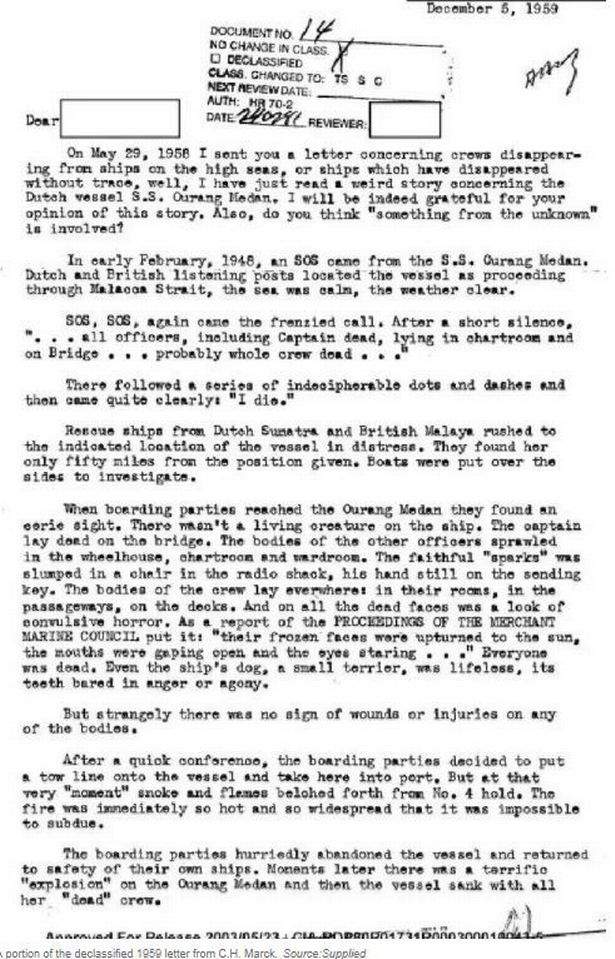 A memo by C.H Marck Jr, assistant to the Director of the CIA Allen Dulles, in 1959

Skepticism exists about the truthfulness of the entire story, suggesting perhaps that the ship may never have actually even existed, but what is certain is that while the Ourang Medan’s story is not the most well known, it refuses to disappear.

What really happened to the SS Ourang Medan? Over the decades several marine historians have sought to uncover the truth about the ship’s puzzling fate. Among these, Roy Bainton’s research stands out. He writes:

“Searching the Dutch Shipping records in Amsterdam seemed only to deepen the mystery. There was no mention of the ship at all, and my enquiries to the Maritime Authority in Singapore drew a blank. “I was facing the distinct possibility that this was simply a hoary old fo’c’sle yarn… until Professor Theodor Siersdorfer of Essen, Germany entered the frame. He had read the plea [I placed] in ‘Sea Breezes’ [a British magazine for old sailors] and I suddenly discovered that I was not alone; Siersdorfer had been on the case for 45 years.”

It seems that Theodor Siersdorfer furthered Bainton’s progress, providing the names of the two American ships that had received the fateful ship’s messages: The Silver Star, owned by Grace Lines of New York and the City of Baltimore. Repeated attempts to get details from Grace Lines in New York of the Silver Star crew list and log book had been met with stony silence.

Bainton goes on to hypothesize that it was deadly leaking gas that caused the crew’s demise stating that the development of such nerve agents were outlawed under the Geneva Convention and thus perhaps shadowy governmental forces erased the Ourang Medan from the shipping registers –a cover up.  He may not be far from the truth. “

What follows is pure speculation, but there is a tantalising, possible explanation as to her crew’s demise and her disappearance from the records.

A fellow researcher, Otto Mielke mentions a mixed, lethal cargo on the Ourang Medan ‘Zyankali’ (potassium cyanide) and nitro-glycerine. How this mixture could have gone unrecorded is a mystery, as the controls on such lethal cargoes, even 50 years ago, would have ensured reams of paperwork.” 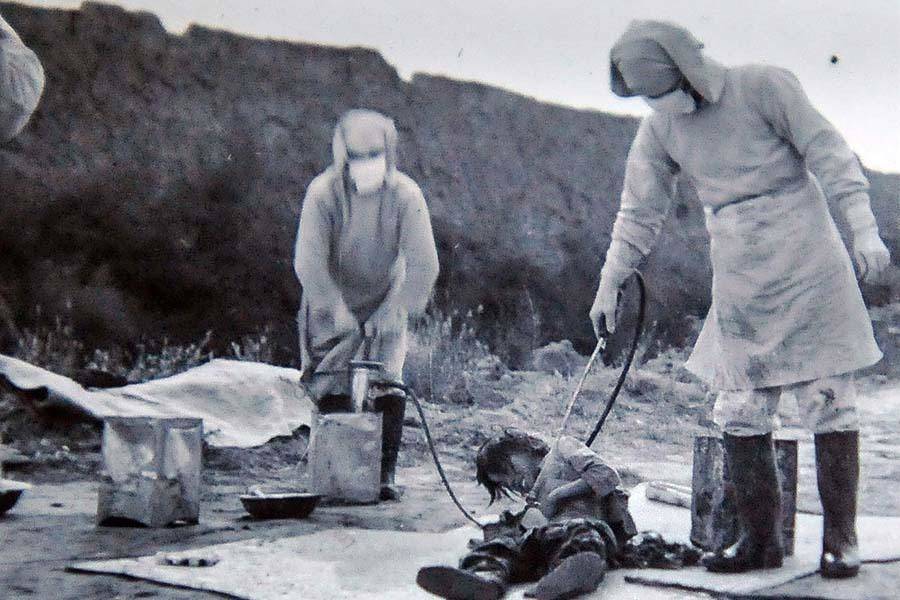 Unit 731 was a secret research and development department within the Imperial Japanese Army that was dedicated to biological and chemical warfare. They used human beings as part of their experimentation during the Second Sino-Japanese War and World War II and thus were responsible for some of the most notorious war crimes carried out by Japanese personnel.

Unit 731’s research methods were unremittingly appalling. However, after the war ended, Douglas MacArthur (the then the Supreme Commander of the Allied Powers) secretly granted immunity to many of Unit 731’s personnel in exchange for providing The United States with their biological warfare research. Shiro Ishii, the department’s head moved to Maryland to work on bio-weapons research.

Bainton continues: “So how was this deadly cargo moved around the South China Sea and through the Straits of Malacca during this troubled period? Not by air; the prospect of a cargo plane crashing with several tons of deadly gas on board was too horrendous to consider. No, you hired an insignificant old tramp steamer, preferably with a low paid foreign crew, stowed the cargo in disguised oil drums and, like all serious smugglers, hoped for the best, and a blind eye from authority.

If we accept, due to the nature of her crew’s deaths, that she was carrying deadly gas or chemicals and if indeed she was a Dutch vessel had this news broken it would have been a major embarrassment for any government involved, especially in the light of the Geneva Convention.

Hence the dead ends faced by any researcher. The story exists because, like the gases, it escaped.”

As with many of these mysteries, it is unlikely that the truth will be uncovered and for now at least, the Ourang Medan remains a dark tale to tell on stormy nights…