The first hand-held metal detector was made in 1925 and was patented by Dr. Gerhard Fisher in 1931. A metal detector had been invented some forty years earlier (1881) by Alexander Graham Bell for the sole purpose of locating a lead bullet in President James A. Garfield. 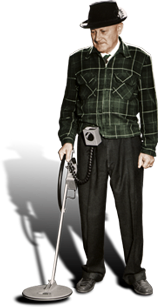 Decades later XP really upped the ante with the XP Deus with incredible Power, speed, precision, lightness and compactness achieved by the incorporation of components developed for leading-edge technologies.

The DEUS marked a technological breakthrough and was a real innovation in metal detector design. Its patented architecture is based on three elements :

A Coil, a Remote Control and a set of Audio Headphones, which are unique in that they communicate with each other via a digital radio link. The search coil contains the essential components for processing the signals, which no longer need to be conveyed via a wire link but are digitised and analysed directly at source by an ultra-miniature digital circuit, which greatly improves the quality of signal acquisition. This circuit, which is integrated in the detection head, processes the information and sends it to the headphones and remote control in real time via a radio link.