Christmas is a Christian festival celebrating the birth of Jesus. The English term Christmas (“mass on Christ’s day”) is of fairly recent origin

The church didn’t celebrate the birth of Christ until the third century because no one knew (or could agree on) the date. It was highly unlikely for shepherds to be watching their flocks in the middle of a Northern Hemisphere winter. They were more likely to be doing that in Spring (or at least in warmer months).  Still, the actual date of Jesus’ birth remains a mystery. For the first few centuries, the main celebration of the Christian church was Easter.

In the fourth century, church officials decided to institute the birth of Jesus as a holiday.  It was Pope Julius I who chose December 25 in an effort to engage with the culture of the day (December 25 was the birthday of Mithra, the god of the unconquerable sun. It was believed that Mithra, an infant god, was born of a rock. For some Romans, Mithra’s birthday was the most sacred day of the year).  It was also the time of the Saturnalia festival – a holiday in honour of Saturn, the god of agriculture. According to history.com Saturnalia began in the week leading up to the winter solstice and continued for a full month.  It was a hedonistic time when food and drink were plentiful – much like Christmas for many people today!

Christmas was first called the Feast of the Nativity.  The custom spread to Egypt by 432 and to England by the end of the sixth century. By the end of the eighth century, the celebration of Christmas had spread all the way to Scandinavia. Today, in the Greek and Russian Orthodox churches, Christmas is celebrated 13 days after the 25th, which is also referred to as the Epiphany or Three Kings Day.  This is the day it is believed that the three wise men finally found Jesus in the manger .

By holding Christmas at the same time as traditional winter solstice festivals, church leaders increased the chances that Christmas would be popularly embraced, but gave up the ability to dictate how it was celebrated. By the Middle Ages Christianity had, for the most part, replaced pagan religion. On Christmas, believers attended church and then celebrated raucously in a drunken, carnival-like atmosphere.

In the early 17th century, a wave of religious reform changed the way Christmas was celebrated in Europe. When Oliver Cromwell and his Puritan forces took over England in 1645, they vowed to rid England of decadence and, as part of their effort, cancelled Christmas.  In June 1647, a British Parliamentary ordinance abolished the feasts of Christmas, Easter and Whitsun. During the Christmas of 1647, a number of ministers were taken into custody by the authorities for attempting to preach on Christmas Day. But good sense finally won out over religious fundamentalism and King Charles II restored Christmas in 1660.

Norse celebrated Yule from December 21 in Scandinavia. To celebrate the magic of sunlight, fathers and sons used logs and set them on fire. People around enjoyed these 12 days until the logs were not burned out completely. It was their belief that each fire spark represented a new pig or calf that would be born in the coming year.

Mesopotamians used to celebrate 12 days long New Year festival before 4000 years. This festival was called Zagmuth. The Mesopotamians, believers of multiple deities, started the celebration to honour their chief deity, Marduk. They used to believe that Marduk fought against the monsters of chaos at the onset of each winter season. It was believed that this was the festival where from the 12 days long Christmas had originated.

Most of the European countries thought that the end of December was an appropriate and ideal time for celebrations. It was a high time to celebrate because there were no cattle left for feeding as most of the cattle were already slaughtered. Celebration could continue with fresh meat and it was the only time of the winter when they had that opportunity. The fermented wine and beer during this time were the additional spice for the celebration. 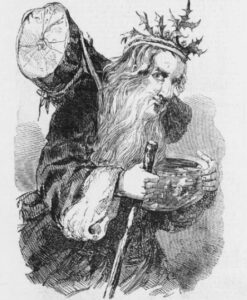 During mid winter German people honoured the time-honoured Pagan God Oden. People of Germany were afraid of the nocturnal sky flights. They used to think that the Almighty had created that to observe and monitor his people of this world. They had also thought that the Almighty had the power to decide who would live and who would perish. Many of them decided to stay inside due to his presence.

Places like Saturnalia, Rome where the winter was not that strong and unkind like countries located in the northern tip celebrated holidays in honour of the God of agriculture, Saturn. Beginning in the week leading up to the winter solstice was a special period when residents had bountiful food items and drinks to celebrate with. The month long celebration had the charm to convert slaves to even masters. Peasants used to control the city. To celebrate the time with fun and frolic all the schools and business organisations had decided to close their shutters.

Juvenalia, the feast honouring the Children of Rome, celebrated during winter solstice, was a prime carnival for Roman people as well. On December 25, the upper class of Rome used to celebrate the birthday of the infant God of the unconquerable sun, Mithra who was born of a rock. It was the most sanctified day of the entire year for few Romans. Easter, the main holiday, was celebrated in the early years of Christianity. However, Christmas or the birth of Jesus was not celebrated.

Romans started to exchange gifts and visit the homes of their friends and relatives during the festivity. It was believed that the ritual of exchanging greeting and gifts during Christmas had come from Rome. 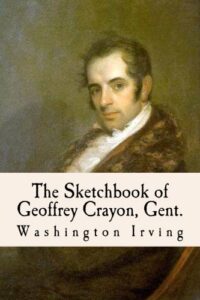 Two books have heavily influenced our current Christmas celebrations: Washington Irving’s The Sketchbook of Geoffrey Crayon, Gent (1891) – a series of stories about the celebration of Christmas in an English manor house.  Irving focused on Christmas being a peaceful, warm-hearted, family-centered holiday bringing groups together across lines of wealth or social status. 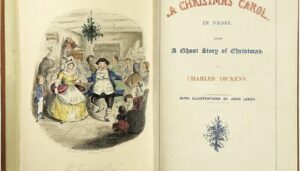 Also around this time, English author Charles Dickens published his classic book, A Christmas Carol. The story’s message was the importance of charity and good will towards all humankind and struck a powerful chord in the United States and England showing members of Victorian society the benefits of celebrating the holiday.

Over the past few decades, some old traditions were added to the “new” view of Christmas presented by Irving and Dickens – people started decorating trees, sending holiday cards and giving gifts.

And that’s how we find Christmas today. In England, we have the idea that we celebrate Christmas as it has been done for centuries but that’s not right.  Thanks to two books we’ve really re-invented a holiday. 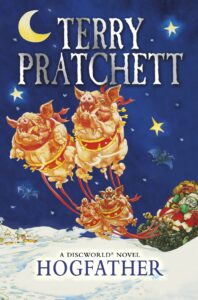 Personally, I now celebrate my Christmas thanks to Terry Prachett and his book ‘ The Hogfather’ and look forward to the Hogfather’s visit on his sleigh pulled by his four boars, Gouger, Rooter, Tusker and Snouter And i always leave out a pork pie and glass of mead. 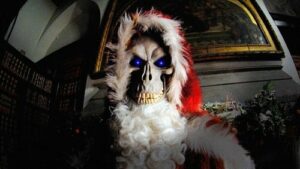 I make Hogswatch Pie from Nanny Ogg’s recipe book (I can also recommend the Strawberry Wobbler) and think about poor little match girls lying frozen in the snow. Hogfather reminds us of the pagan traditions that are behind most midwinter festivals – and how, ‘sooner or later, all the stories are about blood’.

We will deal with St Nick in a seperate post.

354 AD 25 December is made the official birthday of Jesus

11th Century The word Christmas is first used (previously it was called Yule). However Christmas is just one of many festivals and is not particularly important.

16th Century In Central Europe Christmas trees are decorated with candles, wax ornaments and gingerbread. In England people eat mince pies at Christmas. (Originally they actually were made with mince).

17th Century In Europe Christmas trees are decorated with tinsel

1843 The first Christmas card is designed by John Horsley

1848 Victoria and Albert are shown in a picture in the Illustrated London New with a Christmas tree. As a result Christmas trees become common in England

1860 The ‘bang’ is added to Christmas crackers

1871 Christmas Day is made a bank holiday

1974 New Years Day is made a bank holiday in Britain

1996 Discworlds ‘The Hogfather’ was published by Terry Pratchett

1 thought on “The history of Christmas”