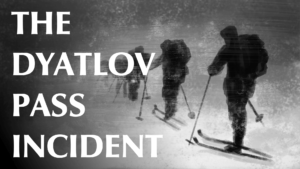 The Dyatlov Pass incident refers to an event that resulted in the deaths of nine ski hikers in the northern Ural mountains. The incident happened on the night of February 2, 1959 on the east shoulder of the mountain Kholat Syakhl (a Mansi name, meaning Mountain of the Dead). The mountain pass where the accident occurred has been named Dyatlov Pass after the group’s leader, Igor Dyatlov.

The mysterious circumstances and subsequent investigations of the hikers’ deaths have inspired much speculation. Investigations of the deaths suggest that the hikers tore open their tent from within, departing barefoot in heavy snow; while the corpses show no signs of struggle, one victim had a fractured skull, two had broken ribs, and one was missing her tongue. The victims’ clothing contained high levels of radiation. Soviet investigators determined only that “a compelling unknown force” had caused the deaths, barring entry to the area for years thereafter. The causes of the accident remain unclear.

A group was formed for a ski trek across the northern Urals in Sverdlovsk now Ekaterinburg. The group, led by Igor Dyatlov, consisted of eight men and two women. Most were students or graduates of Ural Polytechnical Institute now Ural State Technical University:

The goal of the expedition was to reach Otorten, a mountain 10 kilometers north of the site of the incident. This route, at that season, was estimated as “Category III”, the most difficult. All members were experienced in long ski tours and mountain expeditions.

The group arrived by train at Ivdel, a city at the center of the northern province of Sverdlovsk Oblast on January 25. They then took a truck to Vizhai – the last inhabited settlement so far north. They started their march towards Otorten from Vizhai on January 27. The next day, one of the members (Yuri Yudin) was forced to go back because of health problems.[ The group now consisted of nine people.

Diaries and cameras found around their last camp made it possible to track the group’s route up to the day preceding the accident. On January 31, the group arrived at the edge of a highland area and began to prepare for climbing. In a woody valley they built a storage for surplus food and equipment which would be used for the trip back. The following day (February 1), the hikers started to move through the pass. It seems they planned to get over the pass and make camp for the next night on the opposite side, but because of worsening weather conditions, snowstorms and decreasing visibility, they lost their direction and deviated west, upward towards the top of Kholat Syakhl. When they realized their mistake, the group decided to stop and set up camp there on the slope of the mountain.

It had been agreed beforehand that Dyatlov would send a telegraph to their sports club as soon as the group returned to Vizhai. It was expected that this would happen no later than February 12, but when this date had passed and no messages had been received, there was no reaction – delays of a few days were common in such expeditions. Only after the relatives of the travelers demanded a rescue operation did the head of the institute send the first rescue groups, consisting of volunteer students and teachers, on February 20 Later, the army and police forces became involved, with planes and helicopters being ordered to join the rescue operation.

On February 26, the searchers found the abandoned camp on Kholat Syakhl. The tent was badly damaged. A chain of footsteps could be followed, leading down towards the edge of nearby woods (on the opposite side of the pass, 1.5km north-east), but after 500 meters they were covered with snow. At the forest edge, under a large old pine, the searchers found the remains of a fire, along with the first two dead bodies, those of Krivonischenko and Doroshenko, shoeless and dressed only in their underwear. Between the pine and the camp the searchers found three more corpses – Dyatlov, Kolmogorova and Slobodin – who seemed to have died in poses suggesting that they were attempting to return to the camp.[1] They were found separately at distances of 300, 480 and 630 meters from the pine tree.
Searching for the remaining four travelers took more than two months. They were finally found on May 4, under four meters of snow, in a stream valley further into the wood from the pine tree.

A legal inquest had been started immediately after finding the first five bodies. A medical examination found no injuries which might have led to their deaths, and it was concluded that they had all died of hypothermia. One person had a small crack in his skull, but it was not thought to be a fatal wound.

An examination of the four bodies which were found in May changed the picture. Three of them had fatal injuries; the body of Thibeaux-Brignollel had major skull damage, and both Dubunina and Zolotarev had major chest fractures. The force required to cause such damage would have been extremely high, with one expert comparing it to the force of a car crash. Notably, the bodies had no external wounds, as if they were crippled by a high level of pressure. One woman was found to be missing her tongue There had initially been some speculation that the indigenous Mansi people may have attacked and murdered the group, for encroaching upon their lands, but investigation indicated that the nature of their deaths did not support this thesis; the hikers’ footprints alone were visible, and they showed no sign of hand-to-hand struggle.

There was evidence that the team was forced to leave the camp during the night, as they were sleeping. Though the temperature was very low (around -25° to -30°C) with a storm blowing, the dead were dressed only partially, and certainly inadequately for the conditions. Some of them had only one shoe, while others had no shoes or wore only socks. Some were found wrapped in snips of ripped clothes which seemed to be cut from those who were already dead.

Journalists reporting on the available parts of the inquest files claim that it states:

Some researchers point out the following facts which were missed, perhaps ignored, by officials

In 1967, Sverdlovsk writer and journalist Yuri Yarovoi (Юрий Яровой) published the fiction novel “Of the highest rank of complexity” (“Высшей категории трудности”)[5] which was inspired by this incident. Yarovoi had been involved in the search for Dyatlov’s group and the inquest, including acting as an official photographer for the search campaign and in the initial stage of the investigation, and so had insight into the events. However, the book was written in the Soviet era when the details of the accident were kept secret, and so Yarovoi avoided revealing anything beyond the official position and well-known facts. The book romanticized the accident and had a much more optimistic end than the real events – only the group leader was found deceased. Yarovoi’s colleagues say that he had two alternative versions of the novel, but both were declined by censorship. Unfortunately, since Yarovoi’s death in 1980, all his archives including photos, diaries and manuscripts have been lost.

Some details of the tragedy became publicly available in 1990 due to publications and discussions in Sverdlovsk’s regional press. One of the first authors was Sverdlovsk journalist Anatoly Guschin. Guschin reported that police officials gave him special permission to study the original files of the inquest and use these materials in his publications. He noticed, however, that a number of pages were excluded from the files, as was a mysterious “envelope” mentioned in the case materials list. At the same time, unofficial photocopies of the case parts started to circulate among other enthusiastic researchers.

Guschin summarized his studies in the book entitled “The price of state secrets is nine lives”. Some researchers criticized it due to its concentration on the speculative theory of a “Soviet secret weapon”, but the publication aroused the public interest in the theory, stimulated by interest in paranormal. Indeed, many of those who remained silent for 30 years reported new facts about that accident. One of them was the former police officer Lev Ivanov. who led the official inquest in 1959. In 1990 he published an article along with his admission that the investigation team had no rational explanation of the accident. He also reported that he received direct orders from high-ranking regional officials to dismiss the inquest and keep its materials secret after reporting that the team had seen “flying spheres”. Ivanov personally believes in a paranormal explanation – specifically, UFOs.

In 2000, a regional TV company produced the documentary film “Dyatlov Pass” With the help of the film crew, an Ekaterinburg writer, Anna Matveyeva, published the fiction/documentary novella of the same name. A large part of the book includes broad quotations from the official case, diaries of victims, interviews with searchers and other documentaries previously used for the film. The book details the everyday life and thoughts of a woman (an alter ego of the author herself) who attempts to resolve the case.

The Dyatlov Foundation has been founded in Ekaterinburg, with the help of Ural State Technical University, led by Yuri Kuntsevitch), a close friend of Igor Dyatlov and a member of the search team. The foundation’s aim is to convince current Russian officials to reopen the investigation of the case, and solve it. Its other purpose is the upkeep of “the Dyatlov museum”, to honour the memory of the dead hikers.

Yuri Yudin, the sole survivor of the expedition, has stated, “If I had a chance to ask God just one question, it would be, ‘What really happened to my friends that night?’ 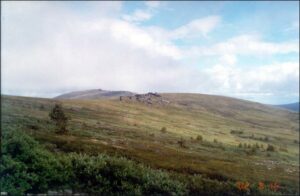 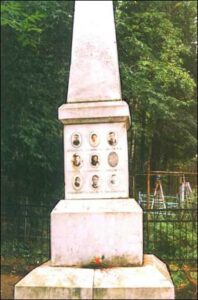