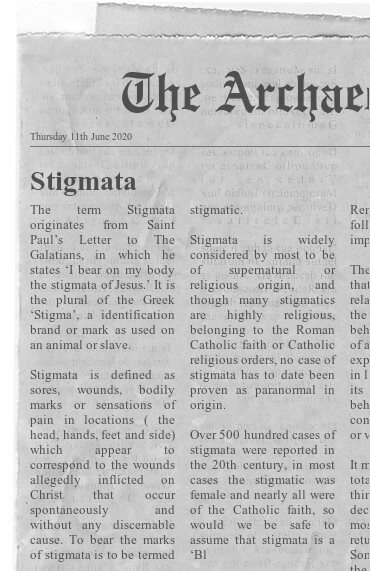 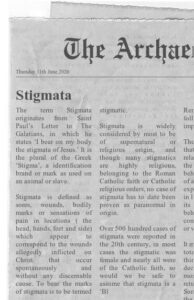 People who have stigmata exhibit wounds that duplicate or represent those that Jesus is said to have endured during his crucifixion. The wounds typically appear on the stigmatic’s hands and feet (as from crucifixion spikes) and also sometimes on the side (as from a spear) and hairline (as from a crown of thorns).

Along with possession and exorcism, stigmata often appears in horror films, and it’s not difficult to see why: bloody wounds that mysteriously and spontaneously open up are terrifying. However, stigmatic’s, who are typically devout Roman Catholics, do not see their affliction as a terrifying menace but instead as a miraculous blessing — a sign that they have been specially chosen by God to suffer the same wounds his son did. 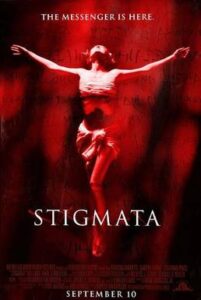 Curiously, there are no known cases of stigmata for the first 1,200 years after Jesus died. The first person said to suffer from stigmata was St. Francis of Assisi (1182-1226), and there have been about three dozen others throughout history, most of them women.

The term Stigmata originates from Saint Paul’s Letter to The Galatians, in which he states ‘I bear on my body the stigmata of Jesus.’ It is the plural of the Greek ‘Stigma’, a identification brand or mark as used on an animal or slave.

Stigmata is defined as sores, wounds, bodily marks or sensations of pain in locations ( the head, hands, feet and side) which appear to correspond to the wounds allegedly inflicted on Christ that occur spontaneously and without any discernible cause. To bear the marks of stigmata is to be termed stigmatic.

Stigmata is widely considered by most to be of supernatural or religious origin, and though many stigmatic’s are highly religious, belonging to the Roman Catholic faith or Catholic religious orders, no case of stigmata has to date been proven as paranormal in origin.

Over 500 hundred cases of stigmata were reported in the 20th century, in most cases the stigmatic was female and nearly all were of the Catholic faith, so would we be safe to assume that stigmata is a ‘Blessing from God?’, an ‘Affinity with Christ’s suffering?’.. Alternatively, even some physical manifestation of the zealous hysteria endured, suffered or enjoyed by the highly pious?

As with any phenomena considered to be a little out there, copious amounts of money, time and labour has been poured into finding a cause – with little publicity or result shown for the effort, but a quick trawl through the internet reveals some snippets of information, which I find interesting. 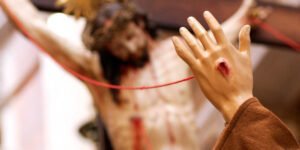 First of these is the statement that ‘No known case of Stigmata is known before the 13th c.’ – This coincides, incidentally, with the first emergence of images of the crucified Christ in Western Christianity. Does this mean that faced with visual evidence of the suffering of their idol, people begin to actually feel His pain? A theory favoured by Christian theologian Ivan Illich in his paper ‘Hospitality and Pain’.

Interesting enough, but surely that’s not exactly very good advertising for the Church is it? Telling your disciples if they really cared about their Idol, they would really suffer his pain? What kind of person would actually want to suffer pain? Hmmm…

Bad marketing, methinks.. Probably why that particular theory wasn’t extensively published.. Next up on the Stigmata list of possible causes is… Self-Infliction. Yes, I know how bad that sounds, but hear me out on this, we aren’t talking deliberate fraud here..

“There is evidence to suggest that some stigmatic’s do indeed mark themselves in an attempt to suffer with Christ as a form of piety.”

Admirable.. in an odd, sadistic kind of way.. A bit like the monks who whip themselves.. again, not the greatest advertising campaign..

Interestingly enough though, the same person who revealed this in his study also revealed that the female ratio of women to men had changed from 7:1 to 5:4 over the last 100 years. Stigmata are no longer a female dominated phenomenon, but do appear to manifest primarily in the non-ordained. 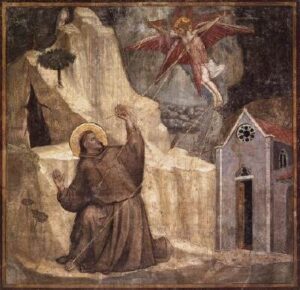 Having stigmata would give these people direct access to the body of Christ without requiring the permission of the Church through the Eucharist. One of the early stigmatic’s was St Francis of Assisi. The unusual thing here was the fact that this case actually predates the time that the image of Christ on the cross began to be displayed, suggesting perhaps that since the wounds displayed did conform to the sites of Christ’s wounds, some supernatural shenanigans may be afoot.

Apparently not. Records show that the holy man was plagued by many afflictions of a medical nature, and modern doctors believe they know what some of these afflictions were. One thing doctors believe he suffered from was a condition called Quartan Malaria.

Quartan Malaria sounds a little bit Deep Space 9, but is actually a very nasty disease. It involves the liver, spleen and stomach becoming infected and causes the victim intense pain. One complication of Quartan Malaria occasionally seen around the time Francis was around is known as Purpura, a haemorrhaging of blood into the skin causing purplish marks.

Purpuras are often observed to occur symmetrically, which means if one hand or foot was affected it would be possible for the other limb to be affected in exactly the same way.

If memory serves me correctly (and it’s a distinct possibility that it doesn’t – I was never that interested in RE classes at school, and most of the information taught was the teachers own interpretation anyway..)

Francis’s wounds were observed shortly after his return from the wilderness – so it is feasible to theorise that Francis was actually afflicted with ecchymoses, which are large Purpura that had been punctured appearing like an open wound. Modern doctors believe this to be a possibility. 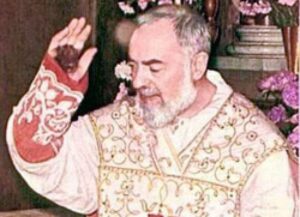 The most famous stigmatic in history was Francesco Forgione (1887-1968), better known as Padre Pio, or Pio of Pietrelcina. The most beloved Italian saint of the last century, Padre Pio first began noticing red wounds appearing on his hands in 1910, and the phenomenon progressed until he experienced full stigmata in 1918 as he prayed in front of a crucifix in his monastery’s chapel.

Padre Pio was said to have been able to fly, and also to bilocate (to be in two places at once); his stigmata was allegedly accompanied by a miraculous perfume; the Rev. Charles Mortimer Carty, in his 1963 biography of the saint, noted that it smelled of “violets, lilies, roses, incense, or even fresh tobacco,” and “whenever anyone notices the perfume it is a sign that God bestows some grace through the intercession of Padre Pio.”

Journalist Sergio Lizzatto, in his book “Padre Pio: Miracles and Politics in a Secular Age” explains the social context in which Padre Pio’s stigmata emerged: “In the first years of the twentieth century, when Padre Pio was a seminarian, the Eucharist — the body and blood of Christ — was at the height of its importance in Catholic practice. Communion was celebrated frequently and became a mass phenomenon. At the same time, asceticism was interpreted in ever more physical terms. Body language — ecstasy, levitation, the stigmata — was held to be the only real mystical language.”

Pio’s stigmata appeared, Lizzatto argues, because that’s exactly what the church and its followers expected to appear in its most devout servants: Jesus’ real, physical torment visited upon the holiest of men.

Though Padre Pio was widely beloved, many weren’t convinced that the friar’s wounds were supernatural. Among the skeptics were two popes and the founder of Milan’s Catholic University of the Sacred Heart, Agostino Gemelli, who examined Padre Pio and concluded that the stigmatic was a “self-mutilating psychopath.”

Still, Padre Pio garnered a widespread following and was canonised by Pope John Paul II in 2002. Though Pio, who died in 1968, never confessed to faking his stigmata, questions about his honesty surfaced when it was revealed that he had copied his writings about his experiences from an earlier stigmatic named Gemma Galgani. He claimed ignorance of Galgani’s work, and could not explain how his allegedly personal experiences had been published verbatim decades earlier by someone else. Perhaps, he suggested, it was a miracle.

So is stigmata real, or a hoax, or something in between? The claimed miracle of stigmata — like inedia, where people who claim not to eat food — is very difficult to scientifically verify. Veteran researcher James Randi, in his “Encyclopedia of Claims, Frauds, and Hoaxes of the Occult and Supernatural,” notes that “Since twenty-four-hour-a-day surveillance would be necessary to establish the validity of these phenomena as miracles, no case of stigmata exists that can be said to be free of suspicion,” and though the possibility of genuine stigmata can never be ruled out, “It is interesting to note that in all such cases, the wounds in the hands appear at the palms, which agrees with religious paintings but not with the actualities of crucifixion; the wounds should appear at the wrists.”

If stigmata is real, there is no medical or scientific explanation for it. Wounds do not suddenly and spontaneously appear on people’s bodies for no reason; some specific instrument (such as a knife, tooth, or bullet) can always be identified as causing the trauma. Without a medical examination, it is impossible to distinguish a minor (but bloody) surface wound (which could be easily faked or self-inflicted) from a genuine and serious puncture wound identical to that caused by a Roman-era crucifixion spike. X-rays, which could definitively determine whether a wound is superficial or truly pierces a limb, have never been done on stigmatic’s.

There are no documentary photographs, films or videos of wounds appearing and beginning to bleed; instead the evidence for the existence of stigmata comes from eyewitnesses who see wounds that are already bleeding, and whose origin explanation must be taken on faith. It is of course considered highly disrespectful to challenge the honesty and integrity of a person who claims (and appears) to be suffering from Christ’s wounds. Stigmatic’s appear to be sincere, and almost certainly often are in at least some pain even if a wound is superficial. It takes a brave sceptic to accuse a beloved friar of fraud or faking the wounds — even if that’s what the evidence clearly suggests.

The fact that many of the faithful take comfort and inspiration from the teachings of stigmatic’s also serves as a deterrent from raising too many questions. Even those with legitimate suspicions may prefer to remain silent if it helps spread the gospel and serves a larger purpose. Until a person suffering from stigmata allows himself or herself to be subjected to close medical scientific investigation, the phenomenon will remain a myth.

In conclusion, I have to say that I for one would prefer that there be a little bit of the unknown left in the world, and that not every presumed paranormal or supernatural phenomenon can somehow with the right investigation and research be disproved. Unfortunately though, it seems the paranormal eludes and slips out of reach yet again….