Tempus Metal detecting and Archaeology group were able to deliver an interesting and rare find to one of the North West Finds Liaison Officers – Vanessa Oakden.

The find of 68 Jeton’s (Currently)  would normally constitute a hoard and classed as treasure if they were actually coins. But in this case as they are only coin like, are not classed as such. The find made on a site in Shropshire was made by 3 members. Primarily Graham Withers who discovered a scatter of 47 tokens, Dave Clarke with 18 and myself – 3. 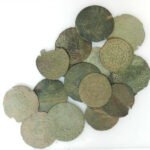 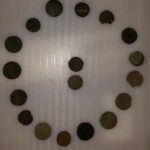 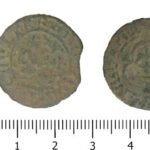 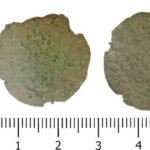 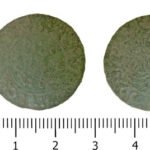 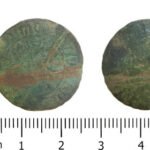 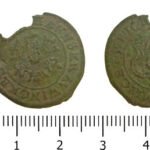 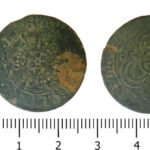 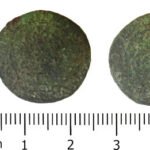 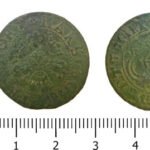 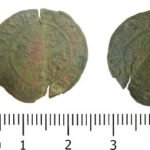 Jeton’s or counters were used as calculation instruments in Europe in the middle ages. According to medieval taste, they were always decorated. These decorations always had a purpose, sometimes religious, but usually related to the user or the principal. In the 16th century, Jeton’s were mostly used to propagate political messages and to glorify the deeds of the ruler. There was such a great need to make propaganda through Jeton’s that they continued to be struck long after Jeton’s ceased to be used as counters. In France and in the Netherlands this new image of the jeton began about the end of the 16th century. The jeton became a small commemorative medal only suitable as a collectors item. The development in Germany was slightly different. In the course of the 17th century the counters became smaller and smaller, for little by little they were only used as chips for card-playing. Real Jeton’s are metallic thin flat discs and are struck like coins. The differences from coins are: the metal is generally copper or brass and seldom silver. Gold Jeton’s are very rare. The measure is always between ca. 20 mm and ca. 28 mm. Smaller or larger pieces cannot be used as reckoning counters. The relief is always low for easy pushing and making piles. (In France the Jeton’s were mostly laid down overlapping, as shown in the figure). Jeton’s are not coins, so they never have an indication of value. The word jeton for counter comes from the French verb “jeter,” used in the sense of “to push,” because the counters were pushed over the abacus during the calculation.

The first counters were flat or bun-shaped discs, usually about 2 cm in diameter and made of stone, glass, bone or brass. These “calculi” are often found at Roman sites. They were also used as “gaming counters” on board games. The first numismatic counters or Jeton’s have to be dated a little before 1200. From that time on, the brass discs were struck like coins in Italy and France by the same men who struck the coins.

It is nearly impossible to say where the first Jeton’s were struck because the oldest Italian and French jetons were mute (they bear no inscriptions), so dating is very difficult. Commonly they have an heraldic sign or a coat of arms in the field and sometimes some isolated characters.

Written sources give us no idea either because Jeton’s were first mentioned in manuscripts at the end of the 13th century. Probably there is connection between the introduction of Jeton’s and the crusades. The crusades had stimulated the rising money-trade in Italy immensely. In addition, the West became acquainted with the copper coins of the Byzantine Empire and the Islamic countries. In order to finance the crusades, the European rulers had to borrow enormous amounts of money from the Italian bankers. If the Jeton’s were first used in Italy, it is imaginable that, through these contacts, they also became known in France, the Low Countries and England.

In 1920 the well-known English numismatist and specialist in Jeton’s F.P. Barnard tried to date the earliest Italian Jeton’s. With considerable doubts, the oldest one has been dated to about 1190. This specimen was attributed to the Genoese Andrea de Rivegno or to the Bolognese banker Guiliano Arardi. Both of them belonged to the financers of the English king Richard Lionheart who borrowed money from them for the Third Crusade. The first jeton that can be dated exactly was struck for the court of the French queen Blanche of Castile. In 1218 she married the later king Louis VIII (1223-1226). After his death, she was regent for the minor Louis IX (St. Louis). She also became regent for her son during his crusade to Egypt (1248-1252)

Her jeton has on the obverse a single lys (France) and on the reverse the castle of Castile between two lys. The oldest Jeton’s of the queen’s court are easier to date than those of the royal court because the older Jeton’s of the king are only decorated by the lys.

The earliest English Jeton’s belong to the year 1280. They bear on the obverse a king’s head crowned, surrounded by a border of alternate strokes and rosettes. On the reverse is a pattern composed of a cross with stars and crescents with a similar border. The star and crescent was a royal badge last used by king Edward (1272-1307). The English numismatist L.A. Lawrence discovered, in 1938, that the portraits of these Jeton’s are identical with those on various issues of the coins of 1280. “This identity,” he wrote, “leaves no room for doubt that the Jeton’s were made from the same irons and punches as the coins and are the work of the London Mint” After the series struck since the reign of Edward 1, the production of English Jeton’s diminished in the 14th century and French Jeton’s were imported in large quantities.

Jeton’s were not used over a long period in Italy. In 1202 a revolutionary new book on mathematics appeared, the Liber Abaci, by Leonardo Fibonacci, better known as Leonardo of Pisa. The word “Abaci” in the title refers only to calculation in general and not to the use of the abacus. On the contrary, in this book he introduced the modern algebra with the new Arabic numerals. The use of the abacus disappeared very quickly in Italy. In 1299, the merchants of Florence were forbidden to keep their books “in abaco” and were ordered to use figures. The last Italian Jeton’s were struck in the 14th century.

In the 15th century the manufacturing of Jeton’s was concentrated in France and the Low Countries (now Belgium and Holland). There were two types: official Jeton’s ordered by a special administration of a prince or a town, and common cheap ones for general use. The first type bears the names, arms and badges of their users; the common type is often an imitation of an official one.

In the 16th century a very large proportion of the counters for common use in Europe were manufactured at Nuremberg, Germany. 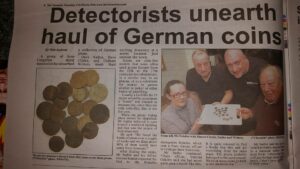 The site has also gleaned many other interesting finds of interest, offering a fantastic overview of history in the area. In total over 150 items were issued to the FLO from the site.

The PAS site shows 18 of the Jeton’s. This however will be added to when additional coins are updated on the site and also when we are able to meet with the FLO to hand over recently discovered Jeton’s.