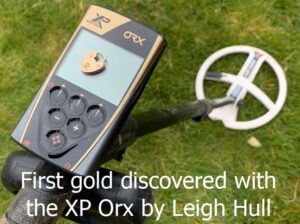 I’ve been detecting for a short while now. I’ve had lots of great finds, but recently i came across my first gold!

It was found in January. I have been waiting to take a shot on the fields where I found it for a while. Its by the side of a River and they have been under water for the last Month and now the Corona Virus! So the Garden it is!

The field is only my second permission and is right next to a Canal too, so some nice finds had come up on the couple of times I’d managed to get on it before the floods. Among them my first full crotel bell and a couple of Victoria coins.

I’d of had the ORX in about 13Khz using the round HF coil, coin fast, reactivity 2 and sensitivity 88. The signal was a bit scratchy and the gold ‘chastity locket’ was about 5 inches down.

Leigh is a moderator of our Facebook page and has been adding his photographs of historical locations, along with a brief description. Thanks for all his input and for this article.