Aiden McHale unearthed this beautiful ring on cultivated land in Kent. In October, only five minutes after walking onto the field.

The ring is know as a Memento Mori ring, this Gold ring has an inscription with words on the inside that reads – MM ob 24th Nov 1712 aet 82. which translates to Memento mori .remember me in death obit(died) 24th Nov 1712 at age of 82. There is also a makers mark: DD 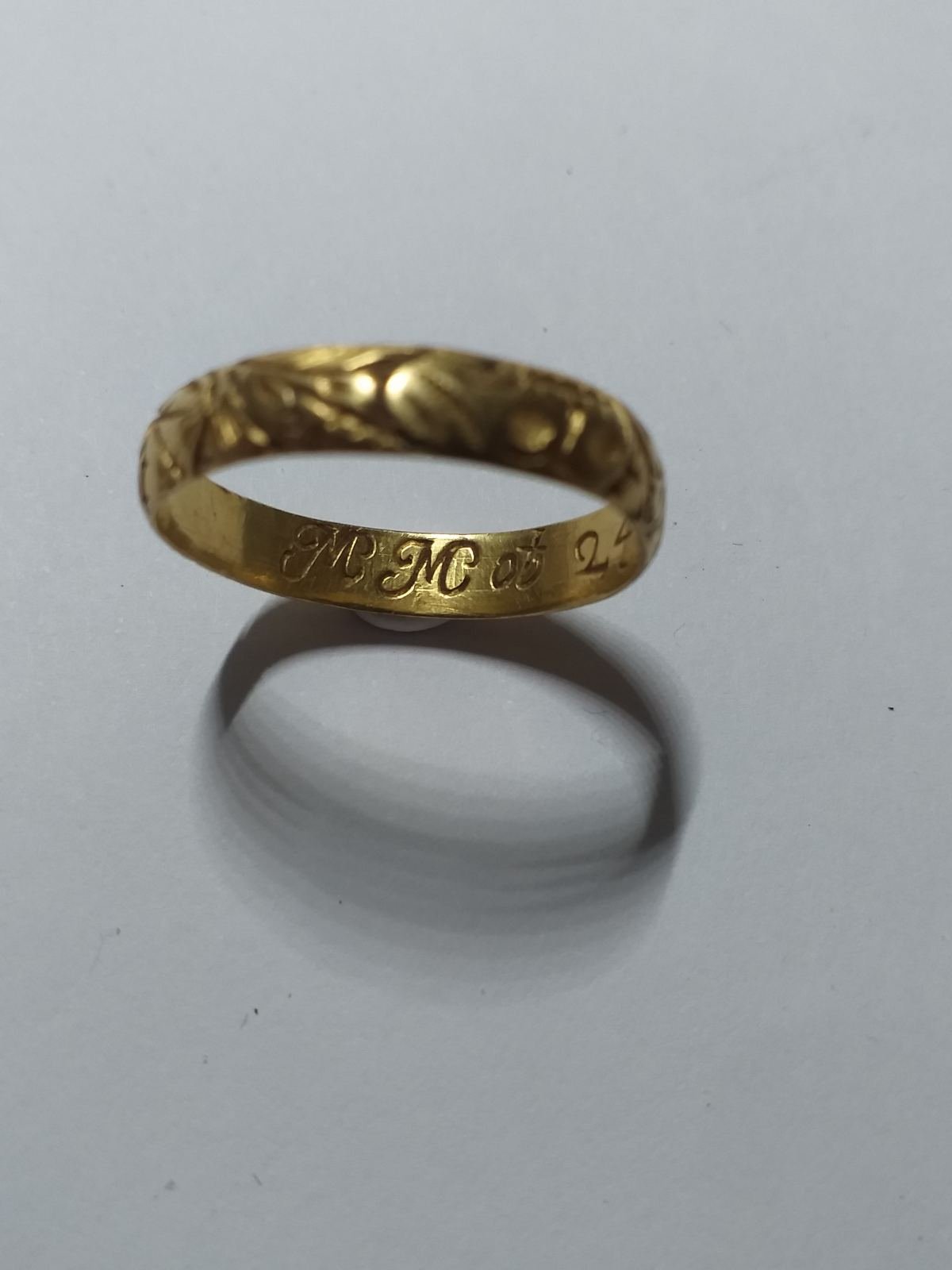 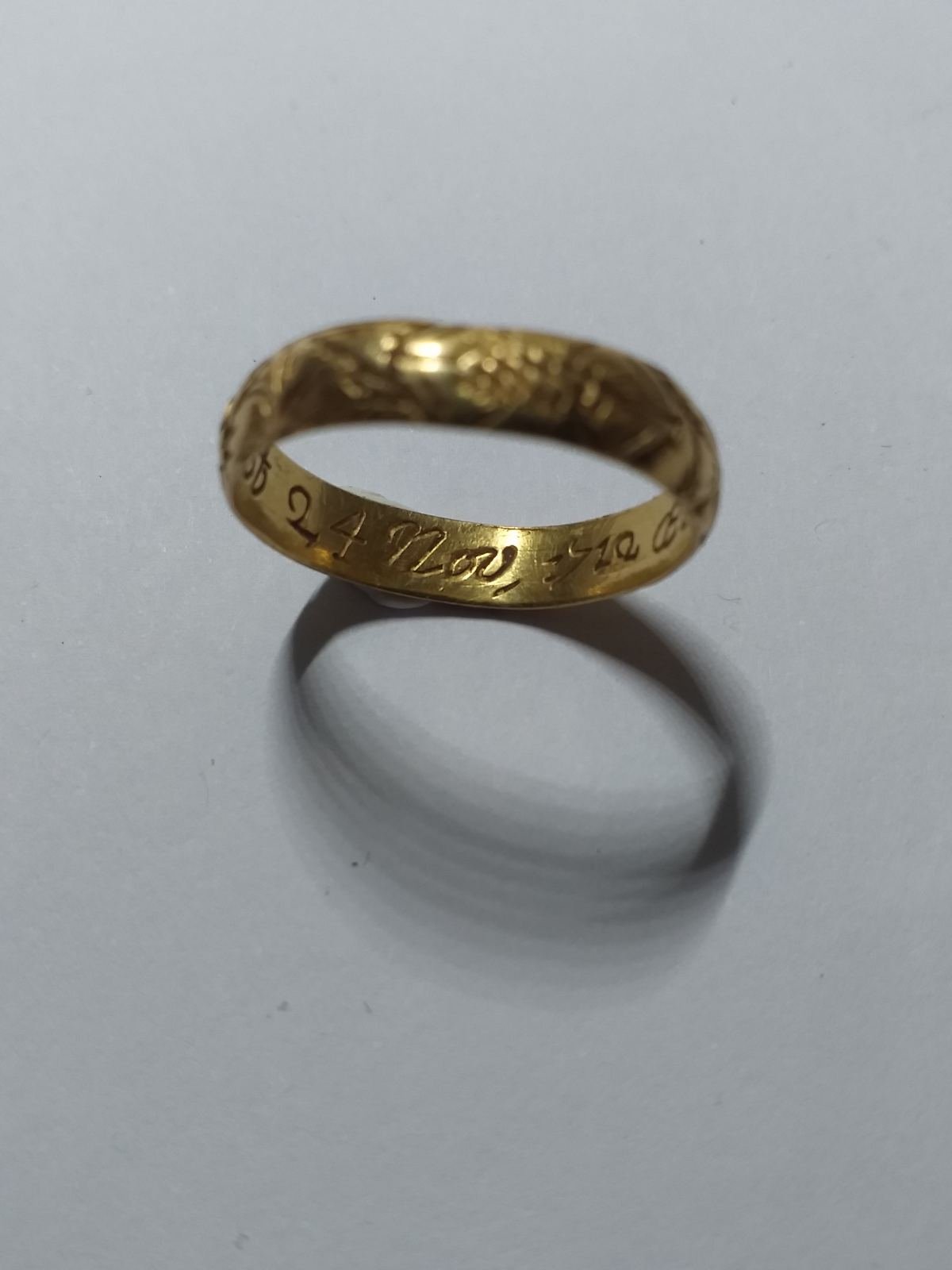 Memento Mori Jewellery is the name given to sixteenth through eighteenth-century jewellery that was created as a reminder of the inevitability of death and the need to live piously. Translation from the Latin, “remember you must die,” is very clearly indicative of the objective of the theme. Skulls, skeletons, and coffins, often worked in gold and enamel were the predominant motifs vividly illustrating the underlying sentiment of pending mortality. An important part of the memento mori jewel was the use of text to express thoughts of death, mortality, remembrance, and religion. Composed in Latin, French or English they were either engraved or enamelled on the outside of a jewel or secretly on the inside, viewable only by the intended recipient.

Rings were the most common form of memento mori jewels although they could also take the form of lockets, pendants, and brooches. The sixteenth century saw an increase in bequests for mourning rings. Often these were just plain bands engraved with a sentiment referencing the departed (sometimes specifically outlined in the will.) Money was left for the purpose of creating the rings along with a specified list of mourners. In the mid-seventeenth century, the theme merged with memorial jewellery and it became popular to have the hair of the departed person, along with relevant dates and initials worked into the piece alongside the skull, coffin symbols and message. The tradition flourished in the eighteenth century but the name of the individual being memorialized became more prominent, the mourning motifs became somewhat less gruesome and the use of intricate hairwork and elaborate allegories were de rigueur.

In Aiden’s word’s- “To remember them in death and to remind them that they are not immortal. Sunflower and Thistles  are engraved to depict life and death.
The skull is typical 17th 18th c design. Rings with black enamelling meant the deceased was married at death.
The deceased who had my ring made had an extraordinary long life for the period. Born in 1630 during Charles l reign. And expiring when Anne reigned. Living through the English civil war, the Great fire and 7 monarchs (if you include Cromwell!).
So much history revealed in such a small find. The ring has been reported to the Portable Antiquities Scheme and when it is safe to do so I shall be handing the ring over to my local Finds Liaison Officer.”
Thanks kindly to Aiden for submitting his find. If you would like to include your finds or stories to Arch MD Mag, you can contact us at editor@archmdmag.com