Skip to content
Home→Historical, History, Mythology and Folklore→Molly Leigh: The Witch of Burslem

Molly Leigh: The Witch of Burslem

Molly Leigh (1685–1746) was an English woman who was accused of witchcraft, died before being tried, and had her grave disturbed following claims that she still haunted the town.

Most people in North Staffordshire are aware of the legend of Molly Leigh, the Burslem witch. Many remember childhood games daring each other to recite the lines “Molly Leigh, Molly Leigh, Can’t catch me” while running round her grave in St. John’s churchyard, fearful that Molly might appear to those brave enough to recite the verse three times. I can certainly vouch that the large, crooked tomb has a certain presence to it.

Molly was born Margaret Leigh in 1685, near to the town of Burslem in North Staffordshire. The industrial revolution had yet to transform the area so Burslem was little more than a small country town, hemmed in to the North by the bleak Staffordshire Moorlands. It’s claimed that Molly was something of an oddity from birth – choosing to suckle from animals and chewing on stale bread even before her teeth had developed. She was not helped by her famed bad looks, and the early death of her parents forced her into a lonely existence on the outskirts of town, keeping the cows through which she earned a meagre living. She was a regular sight around Burslem as she delivered milk, her pet blackbird perched on her shoulder. Even before the rumours of witchcraft began Molly was subject to accusations of selling bad milk.

It’s unclear precisely how and why the rumours did begin, but local people began to claim that the blackbird was a sign of witchcraft. The local Reverend Spencer did little to abate the situation by publicly claiming Molly rarely attended church – in those days a serious misdemeanour. 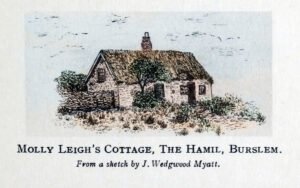 The story goes that, angered by the Reverend’s claims, Molly sent her blackbird to spy on him at his favourite drinking haunt, The Turk’s Head. It’s alleged that when the bird appeared on the pub sign the beer turned sour and the customers suddenly developed rheumatism. What’s more, the Reverend fetched his gun and took a shot at the bird but missed. He was bedridden for days after with mysterious stomach pains. Molly’s unpopularity grew and grew, until the people of Burslem began to blame her for anything unexplained or unfortunate that happened to them. She became increasingly unwelcome in town, and apparently lived out the rest of her days in solitude aside from her pet blackbird. It was said that the bush outside her cottage, a favourite perch of the blackbird, never blossomed. She died in 1748.
Molly’s death was just the beginning of a local myth. Legend has it that shortly after her burial; a group led by Reverend Spencer went to Molly’s cottage in search of the malevolent blackbird. Looking through the grimy windows, they found no bird. Instead, they were shocked to see Molly herself sitting peacefully by the fire in her rocking chair mumbling to herself, “Weight and measure sold I never, Milk and water sold I never.”

Rumours of witchcraft were re-ignited and spread throughout the town. Had the townspeople of Burslem really lived all these years with a powerful witch amongst them? What would be the revenge for her ill treatment? Matters were not helped when the blackbird became a regular sight around town, pecking and harassing people and crowing into the small hours.

According to the most popular version of the tale, the folk of Burslem soon had all they could take of the troublesome bird and Reverend Spencer decided to take action. He summoned together a group of local priests to deal with Molly once and for all. One midnight in April, they travelled to the graveyard at St. John’s with a mysterious sack. They set to the earth with shovels – it must have been an oddly amusing sight to see a group of priests toiling away like farmhands. However, holy men or no, they succeeded at the grim task of exhuming Molly’s body and drove a stake through her heart. The blackbird was grabbed from the sack and bundled, still alive, into the coffin. The lid was swiftly resealed, and then pet and owner were re-interred. It appears that the actions of the Reverend and his gang of cronies worked.

There are still reports of Molly roaming Burslem, and black shades seen in the graveyard, but most versions of the story have it that her influence over the folk of Burslem ends with her reburial. It’s natural that over time, and especially given the amount of pubs in the town, a number of different versions of such a popular tale have cropped up.

A copy of Molly Leigh’s will is in an archive – the original will was signed and dated 2 April 1752.

However, the intriguing thing is that the legend, in any form, has endured for so long. There are no other local folk tales that seem to capture the imagination quite like Molly’s. Its legacy is visible today through Halloween dares, a play about her life, and through the claims to lineage of the 20th-century witch Sybil Leek, who claimed to be a descendant of Leigh’s, and took to keeping a crow, named Mr Hotfoot Jackson, around with her, just as Leigh had done.
Whether witch or victim, Molly Leigh’s story has become one of the most told in the area and her grave a popular attraction for folklorists and dares alike. If anyone summons the courage to run round the grave three times, calling out to Molly then let me know. 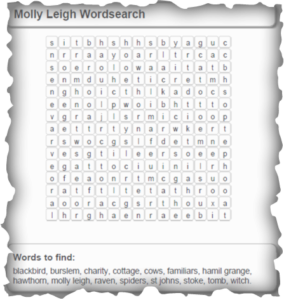