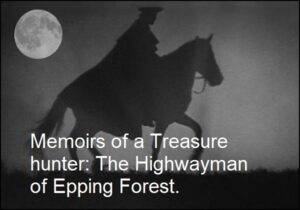 At my Treasure Hunting Club, I joined up with three other people, and we went out most weekends. They were Roger, Norman and Joe.

This was after Ron Rowland the man who showed me how to metal detect and where, could no longer go out. Ron was still chairman and was always there with advice. They were great friends and we had the best adventures ever.

We had found that much between us it was now just the going out for a laugh and enjoying ourselves that mattered. If we found things, great, if we didn’t there was always next week.

Other club members thought we had sold our souls because we were so lucky. But I had served my apprenticeship with Ron, this was not luck, it was daring to believe on a grand scale. There was no secret to our success, we were prepared to go anywhere and in any weather conditions.

It was time for another monthly meeting, this one would end in another great adventure. When I arrived at the hotel where we had the meetings Norman and Joe were already there, Roger hadn’t arrived yet. They shouted me over to their table, they were sat with the oldest member of the club who had something in an oily rag.

Norman shouted to me “look at this”, the old man opened the oily rag and there were two duelling pistols. He had stayed with friends in London and went into Epping Forrest with his detector. It was the first thing he had ever found. Our minds went into overdrive, Epping Forrest equals Highwaymen equals treasure.

This still makes me laugh, everything was so matter of fact, Roger came in and was walking to the bar, Norman shouted to him, Roger turned round, Norman shouted “we are going to London to Epping Forrest at the weekend, to look for Dick Turpin’s treasure,” Roger just casually said ” ok” and carried on to the bar.

I was given the job of doing a bit of research before the weekend. It would be a long trip for us, 6 hours down to London, so we decided to go down Saturday morning stay overnight, spend Sunday searching and drive back Sunday night. Although there are many places linked with Turpin in Epping Forrest I chose the one called Turpin’s Cave close to The Robin Hood Pub, Wellington Hill at High Beech.

Most people think Turpin rode alone but in fact most of the time he rode with Tom King and the Essex Gang.

Sunday morning came and we set off into Epping Forrest. We were looking for old walkways and bridle paths and any places of interest. We had found a few Victorian coins along the way which was always nice, and stopped for something to eat when we got to a clearing. There were some large stones to sit on while we pondered which path to follow. We carried on up an old pathway and started to pick up more Victorian coins, Joe found a Georgian penny and then we found three complete Victorian purses with silver coins in them.

We started to think about heading back out of the forest, we were happy, it had been a great day out. The closest to highwaymen’s loot was the Georgian penny but it didn’t matter, the Victorian stuff we found was more than enough.

We arrived back in the clearing where we had stopped for something to eat and sat on the rocks for five minutes. We started to leave the clearing and head back, Joe was still having a last look round when he shouted us back, he had got a large reading near one of the rocks. Joe started to dig down carefully, and there it was, buried only six inches down, a George 2nd silver bowl, completely black with age. No one spoke, it was the right period for Highwaymen 1683-1760. Tom King was accidentally killed by Turpin in a botched escape in 1737 and Turpin was hung in 1739.

Joe said it was Turpin’s, no one argued, Joe was six foot four and built like Little John. The silver bowl had been buried a long long time, we could tell by the compacted ground around it. This left two options, someone buried it quickly because they were about to be robbed, they were killed so couldn’t return, OR it was buried Highwaymen’s loot. If so, who can say it wasn’t Tom King’s or Dick Turpin’s. The four of us had many more adventures but it wasn’t to last.

We were just about to start diving on shipwrecks when the dream ended one day in June 1976. Roger was killed in a tragic accident whilst on another adventure on a yacht in the English Channel, the yacht had collided with a German Tanker in the middle of the night on the way back from France looking for treasure, aged only 26, he was an adventurer and seeker of dreams to the very end. It was typical Roger, it wasn’t exciting enough just to go across the Channel on a ferry, he had to hire his own yacht, cost didn’t come into it, it was the thrill of it all. Roger was always going to die young, I think he knew it. If he wasn’t dangling from a rope down a cliff face because he had seen a cave he wanted to explore he was buying the latest fastest sports car. Roger will always be the stuff of legend. I miss him just as much now as I did in 76. Norman died suddenly at home aged only 44, and Ron had also died, and Joe died about three years ago. For Ron, Norman, Roger and Joe, without whom………