Skip to content
Home→Historical, History, Mythology and Folklore→Masonic pigpen cypher at the Grave of Thomas Brierley.

Masonic pigpen cypher at the Grave of Thomas Brierley.

Whilst on a period of 4 on 4 off at work, I was given masses amounts of time to myself, especially when the days fell in midweek. So off I went on numerous adventures. I searched for oddities and curiosities in my local area and being a freemason was lead directly to St Thomas’s church in Mellor, Greater Manchester.

The reason – the gravestone of Thomas Brierley which is the only one in the United Kingdom known to incorporate masonic pigpen cypher in its inscription.

Before I even entered the Churchyard, I fell in love with the stunning landscape around St Thomas church and was even taken aback by a small sign and an introduction into the local archaeology. Evidence for early settlement in the area came to light during the drought of 1995 in the gardens and fields surrounding their home, the Old Vicarage in Mellor, showed cropmarks on the lawn.

Excavations by Manchester University Archaeological Unit have revealed a spectacular hillfort with evidence of Iron Age structures in the interior as well as a Mesolithic camping area. It is believed to have been associated to the  Celtic Brigantes tribe, but archaeological evidence reveals that the site was occupied as far back as the Bronze Age (8,000 BC), when it is thought it may have been a seasonal camp or a knap site for the production of flint tools, it remained occupied up to the Romano-British period.

The settlement at Mellor was discovered in the 1990’s when local historians John and Ann Hearle, of the Old Vicarage in Mellor, spotted cropmarks on the lawn and gardens and fields surrounding their home during a drought.

Excavations of the site by Manchester University Archaeological Unit commenced in 1998 when the ditch of a large Iron Age hill fort was revealed at the West end of the Old Vicvarage garden, the ditch contained Roman and Iron Age pottery. The drainage gulley of an Iron Age roundhouse, 13 measuring metres across, was also discovered in the middle of the Old Vicarage garden. Alongside it there was an area of gullies and post-holes.

A flint dagger was found on the site which has led to the interpretation that during the Bronze Age the site was used for funerary practices. Many of the hills near Mellor are surmounted by Bronze Age funerary monuments such as Brown Low, Shaw Cairn, and Werneth Low. A Bronze Age rare high-status amber necklace was also unearthed at the site, which formed part of a 4,000 year old burial.

The Iron age occupants of the fort dwelled in roundhouses, the site was probably divided into separate areas for habitation, industry, and agricultural activities. Excavations revealed that the area enclosed by the inner ditch mainly served as a habitation area, while the area between the inner and outer ditches was used for agricultural purposes. 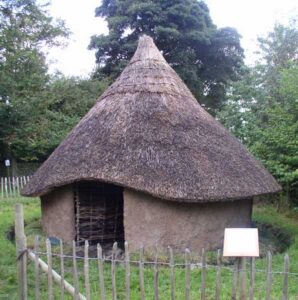 An Iron Age roundhouse has been reconstructed at Mellor by students of archaeology from Ridge Danyers Sixth form College in nearby Marple through a European Community Culture Programme, the roundhouse is now one of the highlights of the site.

There have also been finds of medieval pottery and arrowheads, radio-carbon dating revealed there was a structure dating from around the fourteenth-fifteenth centuries. It was most probably the original Mellor Hall, the home of Roger de Melleur, the King’s Forester of the Peak. St. Thomas’s Church, adjacent to the site, also contains an interesting Saxon carved stone font, probably dating from the eleventh century, as well as the grave of Thomas Brierley.

Thomas Brierley was born on 16 July 1785 in Mellor to Joab Brierley and Betty Arnfield. He was also known as “Tommy” and some references call him “Didymus” – perhaps confusing him for an uncle of that name or as a common alternative to Thomas. He became a blockprinter at the Printworks mill in Strines, Manchester, where calico was printed. Later as a carter he plied his trade between Ludworth and Disley.

Brierley was a regular attendee at the Freemason Lodge of Union (originally a Lancashire Lodge of Union No.50), according to the records that exist between 1824 and 1830 and from 1840 to 1848. The Lodge migrated from Manchester to Mellor in 1822. It met at the Devonshire Arms and several other hostelries in the locality before it shifted to the Shuttle Inn (renamed the George) at Ludworth. Returns to the Clerk of the Peace between 1834 and 1841 show that the Lodge averaged about 20 members each meeting; chiefly miners and minor tradesmen. Brierley was also Treasurer of the Royal Arch chapter (founded 1824). He was also a member of the Moon Lodge of Benevolence, as well as other degrees including Mark and Rose Croix. 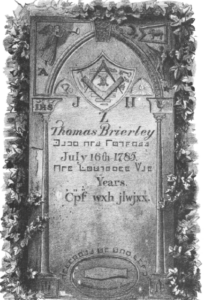 Thomas seemed to have some periods of illness and had recourse to the sick funds of the society. A number of members complained and made unpleasant personal remarks, as apparently his illness coincided with a slack time at Strines Printworks. It is said that he was “an honourable man and this charge grieved him sore.”

He had a stone coffin made by Azariah Ollerenshaw, a stonemason of local repute, and for which he lay down so that the coffin could be accurately cut for his body and head for a perfect fit.

The coffin was then placed, exposed, on a previously purchased grave site at St. Thomas’ Church, Mellor. The lid was carved with some Masonic symbols and underneath the words, “I am belied,” referring to the accusations of feigned illness. It lay there for some years and became quite a tourist attraction. However, it eventually created too much unwanted attention for the vicar, Rev. Matthew Freeman, who ordered it to be buried in the grave (and it apparently still lies there just below the surface).

Not to be frustrated, Thomas had a memorial headstone prepared covered with ‘cipher-writings’ and ornate masonic emblems which was placed over his grave before he died. Subsequently, there was talk of burying him in his stone coffin but it was found to be too heavy to remove to the house and it was not done to take the body to the coffin in the grave. He was buried in a wooden coffin presumably beside the stone coffin

According to some, Thomas Brierley fell to his death from the church tower, but other sources disagree so this story may be an urban legend. To add to the mystery, a bronze plaque was added to the stone in recent times with more cipher upon it, the cipher used being similar but not identical.

He is reported to have died in 1854 aged 69 years although Letters of Administration, after his death, granted to his father Joab states that he died on 22 July 1855. He was interred in Mellor Churchyard 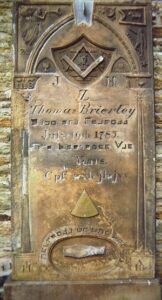 The cipher on the headstone was presented as a mystery in books and newspaper articles right into the latter part of the 20th century. The headstone is actually written in five pig-pen variations. The text at the head of the stone says “Thomas Brierley made his ingress July 16th 1785, His Progress was ____ Years And his Egress___”. The headstone was never completed after his death (possibly because no one was interested and his father survived him only one more year and was of advanced age). 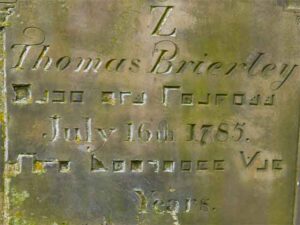 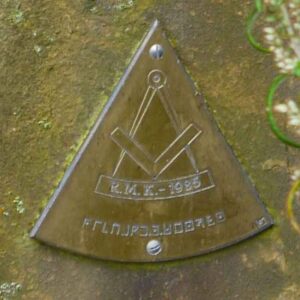 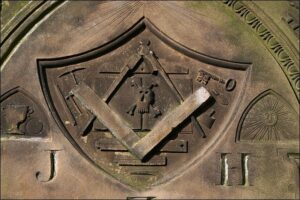 The cipher at the foot of the gravestone says “Holiness of the Lord”. The Pigpen cipher was used by Freemasons in the 18th century to keep their records private and surprisingly the cipher on Thomas Brierley’s grave seems to have a non-standard symbol for the letter “S”. It is possible the variation in the cipher is a clue to or a key to documents that he dealt with as the treasurer.

However, at the time of its placement in the graveyard the common impression was that it contained the old charge against his fellows and it was stated to be purposefully written in Hebrew to defy objections to it being placed over the grave during Thomas’ lifetime. Indeed, newspaper reports echoed this and one gentleman visiting the grave solemnly asserted it was Greek but when cornered in the subject admitted it was a kind of Greek that a university education had not acquainted him with. 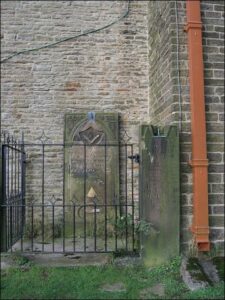 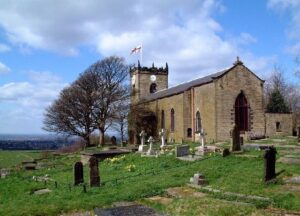 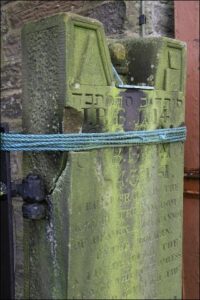 What is pig pen cypher?

The Pigpen Cipher is an example of a substitution cypher, but rather than replacing each letter with another letter, the letters are replaced by symbols. The cypher has an interesting history: although its true origins are unknown, it has been used by many groups. Most notoriously, it was the cypher of choice for use by the Freemasons. In fact, they used it so much, that it is often referred to as the Freemasons Cypher. However, it was not exclusively used by them, with Union prisoners in Confederate camps using it to communicate in the American Civil War.

So What does it say?

Although the cipher is quite simple, Thomas used several variations on the idea to make it rather more difficult. The first line of code immediately under the name “Thomas Brierley” can be read by using this cypher.

The second line, underneath “July 16th 1785”, uses a different configuration of cyphers:

With the third line, underneath the word “Years” he uses yet another variation, a straightforward letter substitution. However, just in case you think it is too easy, he uses different substitutions for each of the three words:

Finally, the symbols inscribed around the coffin at the base of the memorial use the first substitution shown above.

So the answer to Thomas Brierley’s Graves Masonic pigpen cyper –

Holiness to the Lord. 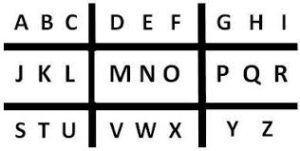 An example of Rosicrucian cypher is –