On June 20th this year. We brought you the news that long standing Metal Detecting brand – Whites Electronics had ceased manufacturing and announced the retirement of the company, With a statement from CEO – Ken White explaining the details. 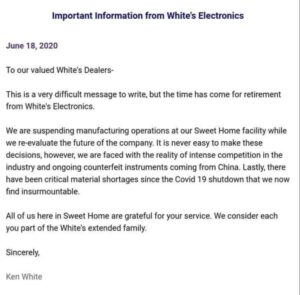 In Breaking news from the USA, it seems that the companies future has been saved by the well known brand – Garrett Metal Detectors.

White’s, who had been in business since 1950 as a premier manufacturer of metal detection products, announced the suspension of operations on June 18, 2020 in a memo to its dealers. White’s founders, Kenneth and Olive White, built their business the same way Garrett’s founders, Charles and Eleanor Garrett, did, by innovating and committing to producing high quality products in the United States. White’s current principals, Kenneth R. and Mary White, are choosing to fold the White’s legacy in with Garrett Metal Detectors as a way of extending their “Made in the USA” tradition.

Garrett CEO Steve Novakovich commented, “The White family and the Garrett family have had a high level of respect for one another as competitors in the sport market for decades. Now we at Garrett are proud to combine our respective legacies as Garrett continues on as the premier American metal detector company.”

Novakovich continued, “Garrett recognizes that the White’s brand has a loyal following in the US and around the world. We are pleased to welcome those customers to Garrett, and we hope we can earn your future business.””

We know many of our readers and ourselves will be happy to see the Whites brand continuing to survive and look forward to Garrett’s bringing the brand back into the Metal Detecting world.