Skip to content
Home→Historical, History→FATA MORGANA: MIRAGE ON THE HORIZON

FATA MORGANA: MIRAGE ON THE HORIZON

Fata Morgana, also known as Morgan le Fay, was a fairy enchantress skilled in the art of changing shape. In one traditional story she was King Arthur’s sister and learned many of her skills from Merlin the Magician.

A special type of complex mirage, one that sometimes gives the impression of a castle half in the air and half in the sea, is named after Fata Morgana. She was known to live in a marvellous castle under the sea. Sometimes the enchantress made this castle appear reflected up in the air, causing seamen who mistook it for a safe harbour to be lured to their deaths.

The fata morgana mirage is one that can occur only where there are alternating warm and cold layers of air near the ground or water surface. Instead of traveling straight through these layers, light is bent towards the colder, hence denser, air. The result can be a rather complicated light path and a strange image of a distant object. A fate morgana actually is a superposition of several images of one object. Typically one image is upright more or less above two inverted images that may be mingled together. The images may undergo rapid changes as the air layers move slightly up and down relative to the observer. 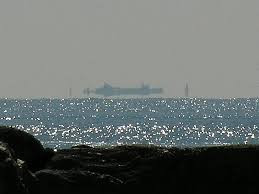 In Alaska the best chance of seeing the relatively rare fate morgana is in winter when temperature inversions develop in the larger valleys. When seeing a complex mountain image out across a valley or bay one can attempt to sort out in the mind the paths that the light rays must have taken. Perhaps it’s best just to acknowledge that it is Morgan le Fay beckoning.

Another type of mirage is known as a superior image. In this type of mirage, which usually occurs over water or ice, the light rays from an image are refracted downward rather than upward. As a result, a ship on the ocean may seem to be floating in the air. Also, an object that is below the horizon, that could not normally be seen, may be seen on or just above the horizon. This phenomenon is called looming. The image may also be magnified, so that very distant objects may seem closer.

The schooner Effie M. Morrissey was sailing the North Atlantic on July 17, 1939 when a Fata Morgana appeared. Though the coast of Iceland was some 320 miles away, Captain Bartlett indicated that it appeared as if it was only twenty five miles away. “The contours of the land and the snow-covered summit of the Snaefells Jokull showed up almost unbelievably near.”

Fata Morganas may also be the cause of legends about phantom ships that sail the sky. Reports of the ghost ship Flying Dutchman may well have been the reflection of some distant vessel.

Scientists believe Fata Morganas are most likely to form when the sea is much colder than the atmosphere. As the water cools the air directly above it, a boundary layer forms. These types of mirages are most likely to show up after dawn, before dusk or as a storm is building up. They also tend to favour particular locations. The Straits of Messina, between Sicily and the Italian mainland, are famous for its Fata Morganas.

When several boundaries of air are involved, a mirage can become even more complex as the light is refracted multiple times. This can make natural objects, like cliffs, appear as city buildings, or castles. This is probably the best explanation for the Alaskan City mirage, though some contend that it was actually a magnification of the English city of Bristol some 2,500 miles away.

A case of extreme interest that I myself was privy too was reported to The Manchester Association of Paranormal Investigation and Training by a ships crew member Mr S Barnes and his own and fellow crew member’s sighting during World War 2. Mr Barnes statement and the subsequent correspondence can be found here.