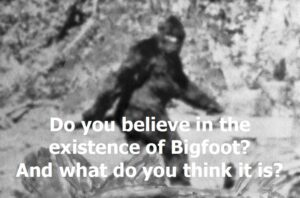 This week on the Archaeology and Metal Detecting Facebook page  we asked the question – ‘Do you believe in the existence of Bigfoot? And what do you think it is?’

Bigfoot, Sasquatch, Yowie, Yeti, Orang Pendek, whatever you call the phenomenon has a long and varied history. Mocked by some, researched by many, the tales of Bigfoot keep tens of thousands of fascinated people interested. So much so, films, books, tours and websites have created a profitable industry for something that maybe nothing more than a myth. 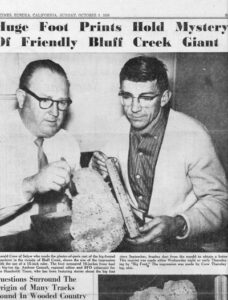 In 1958, journalist Andrew Genzoli of the Humboldt Times highlighted a fun, if dubious, letter from a reader about loggers in northern California who’d discovered large footprints. “Maybe we have a relative of the Abominable Snowman of the Himalayas,” Genzoli jokingly wrote in his September 21 column alongside the letter.

Later, Genzoli said that he’d simply thought the mysterious footprints “made a good Sunday morning story.” But to his surprise, it really fascinated readers. In response, Genzoli and fellow Humboldt Times journalist Betty Allen published follow-up articles about the footprints, reporting the name loggers had given to the so-called creature who left the tracks—“Big Foot.” And so a legend was born. 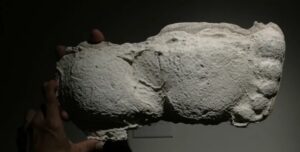 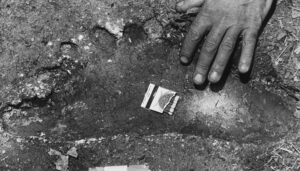 The one thing that gave Bigfoot prominence in the popular culture, was the video footage by Patterson and Gimlin in 1967. Although it’s been decades since the Patterson-Gimlin film turned a legend into a household name, the footage and stories behind it still remain fascinating 50 years later.

The filmmakers, and namesakes of the film, are two former rodeo men from Yakima County in Washington. One, Bob Gimlin, still lives there. Roger Patterson died in 1972. They shot the footage off the banks of Bluff Creek in Northern California.

Interestingly. The footage has stood the test of time and has still not been debunked or proved as evidence of Bigfoot’s existence.

There are various wild man myths from all over the world. 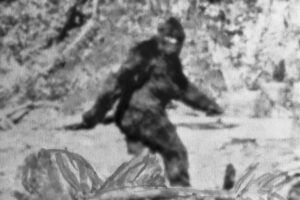 In North American folklore, Bigfoot or Sasquatch are said to be hairy, upright-walking, ape-like creatures that dwell in the wilderness and leave the large footprints mentioned earlier, giving the name. Depictions often portray them as a missing link between humans and human ancestors or other great apes. They are strongly associated with the Pacific Northwest, particularly Oregon, Washington, British Columbia and Northern California. Individuals have claimed to see the creatures all across North America over the years. These creatures have inspired numerous commercial ventures and hoaxes.

Folklorists trace the figure of Bigfoot to a combination of factors and sources, including folklore surrounding the European wild man figure, folk belief among Native Americans and loggers, and a cultural increase in environmental concerns.

In western Canada, the Sts’ailes First Nation have the “Sasq’ets,” the supposed origin of the word “Sasquatch.” However, the modern U.S. concept of bigfoot can be traced quite directly to the Humboldt Times stories in 1958.

In Himalayan folklore, the Yeti  is a monstrous creature. The entity would later come to be referred to as the Abominable Snowman in western popular culture. The names Yeti and Meh-Teh are commonly used by the people indigenous to the region, and are part of their folk beliefs. Stories of the Yeti first emerged as a facet of Western popular culture in the 19th century. The scientific community has generally regarded the Yeti as the result of a complex of intricate folk beliefs rather than a large, ape-like creature. 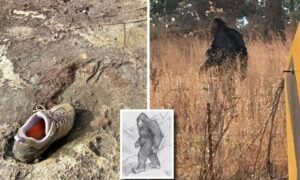 The Yowie is one of several names for an Australian folklore entity reputed to live in the Outback. The creature has its roots in Aboriginal oral history. In parts of Queensland, they are known as quinkin, and as joogabinna, in parts of New South Wales they are called Ghindaring, jurrawarra, myngawin, puttikan, doolaga, gulaga and thoolagal. Other names include yaroma, noocoonah, wawee, pangkarlangu, jimbra and tjangara. Yowie-type creatures are common in Aboriginal Australian legends, particularly in the eastern Australian states. 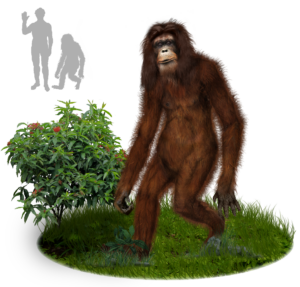 Orang Pendek is the most common name given to a cryptid, or cryptozoological animal, that reportedly inhabits remote, mountainous forests on the island of Sumatra. The animal has allegedly been seen and documented for at least one hundred years by forest tribes, local villagers, Dutch colonists and Western scientists and travellers. Consensus among witnesses is that the animal is a ground-dwelling, bipedal primate that is covered in short fur and stands between 80 and 150 cm (30 and 60 in) tall. Maybe not the tall similarity as the other types discussed but generally associated when mentioned.

In the UK we even have our own version of Bigfoot. Recent reports from Sussex, Kent, Cornwall, Cheshire, Cumbria Lincolnshire and many other areas exist. 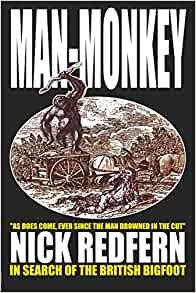 The sightings even go as far back to Staffordshire in 1879. In her 1883 book, Shropshire Folklore, Charlotte S. Burne wrote:

‘A very weird story of an encounter with an animal ghost arose of late years within my knowledge. On the 21st of January 1879, a labouring man was employed to take a cart of luggage from Ranton in Staffordshire to Woodcock, beyond Newport in Shropshire, for the ease of a party of visitors who were going from one house to another. He was late in coming back; his horse was tired, and could only crawl along at a foot’s pace, so that it was ten o’clock at night when he arrived at the place where the highroad crosses the Birmingham and Liverpool canal. ‘Just before he reached the canal bridge, a strange black creature with great white eyes sprang out of the plantation by the roadside and alighted on his horse’s back. He tried to push it off with his whip, but to his horror the whip went through the thing, and he dropped it on the ground in fright.’

The creature duly became known to superstitious and frightened locals as the Man-Monkey. Between 1986 and early 2001, Nick Redfern delved deeply into the mystery of the strange creature of that dark stretch of canal. In his book –MAN-MONKEY – In Search of the British Bigfoot – Author and researcher – Nick Redfern includes his original interview notes, his files and discoveries; as well as his theories pertaining to what lies at the heart of  legend.

A majority of scientists have historically discounted the existence of the Bigfoot genre entities, considering it to be a combination of folklore, misidentification, and hoax, rather than living animals

So why has the Bigfoot legend persisted for 60 + years?

Readers of the Archaeology and Metal Detecting magazine responded to our question, with their thoughts and theories. Thanks to all

Carole Smith replied – ‘I believe with vast areas of unpopulated forest it’s possible a large Ape like creature could exist. Only a few years ago they found a group of unknown Orang in Southern Malaysia … a new species of Orang genetically different to those in Borneo. No one knew they were there. The physical evidence though is sparse and not ‘scientific’ enough so doesn’t receive the same protection to avoid contamination for example. This leaves me sceptical. I’d believe it if I saw it myself or saw hard evidence to support the hypothesis !’

Jason Smith says – ‘No. No hair or skin samples have ever been found to be of unknown origin.’

Jan Kingshott – ‘I’m open minded to the possibility. The PG film is, to me, compelling, remaining so after scientific scrutiny.’

What does science say?

Several scientists have attempted to study material that supposedly has come from yetis. In one 2014 study, for instance, Bryan Sykes at the University of Oxford in England gathered up 30 samples of “yeti” hair. They had been collected by people or were sitting in museums. Sykes’ team searched the hair samples for RNA from mitochondria, which are the structures inside cells that produce energy. RNA molecules help read information from DNA. They also produce proteins that can be used to find out what species the hair had come from.

Most of the hair came from animals that no one would mistake for a yeti. These included porcupines, cows and raccoons. Other hair samples came from Himalayan brown bears. And two appeared similar to hair from an ancient, extinct polar bear. Could ancient polar bears have mated with brown bears to produce modern yetis? Sykes and his colleagues raised that possibility in the Proceedings of the Royal Society B.

Charlotte Lindqvist wasn’t surprised to see that some “yeti” hairs came from bears. But she doubted the possibility they came from polar bears. Lindqvist is an evolutionary biologist at the State University of New York at Buffalo. “We know there is interbreeding between polar bears and brown bears” up in the Arctic, she says. But as cold and snowy as the Himalayas are, they are thousands of miles from the polar bears’ Arctic home. That’s too far, Lindqvist thought, to make likely any romance between a polar bear and Himalayan brown bear.

Lindqvist got 24 samples of hair, bones, meat — even poop. All were said to have come from “yetis.” Lindqvist and her colleagues then analysed the mitochondrial DNA — sets of instructions for how mitochondria function — in each. Of the 24 samples, one came from a dog. All the rest came from Himalayan black or brown bears. The two bear species live on a plateau on either side of the Himalayas. Brown bears live to the northwest; black bears to the southeast. Lindqvist and her colleagues published their findings in 2017, also in the Proceedings of the Royal Society B.

So worldwide belief of the ‘Bigfoot’ type beings still and will continue to exist. Believers will believe, None believers wont. Arguements will continue, Hoaxes will occur, Bigfoot hunters will continue to hunt. For me. I wish I lived in America and could hit the trails to make up my own mind. I will continue to watch the Documentaries and read the news reports. Bigfoot remains a fascinating study. – Dave Sadler

Thanks to all who offered their thoughts.We would love to hear readers own in the comments section. Below are a selection of Bigfoot in popular culture.