An Egyptian Mystery! By Janet Griffiths

I have in my time been opened minded on certain aspects of the paranormal, but the phenomenon known as apportation I have been quite sceptical about, that was until 2007 aboard the Nile cruise ship MS Oddessy…

A few days before we were to complete our cruise on the Nile, my friend Celia ordered a silver Cartouche for her grandson Kyle from a jewellers shop situated on the ground floor of the ship.

Cartouches are engraved with the name of their owner. George who ran the jewellers shop said it would take some time, but it will be ready to pick up before you leave the ship. On the last morning my friends and I went from our cabin on the ground floor up to the second floor to the dining room for breakfast, after breakfast my friend’s daughter Vicky said she would go up on the top deck for a while and meet up with us later. I decided to go up to my cabin so to finish packing whilst Celia went down stairs to the ground floor jewellers to see if the Cartouche was ready.

Celia eventually turned up at my cabin and said that the shop owner was not there but his cousin had said that the Cartouche would not be ready until later.

So, we continued packing up our things. Vicky must have still been up on deck so I packed her travelling home clothes into her flight bag. Celia and I went back up to the second floor to have lunch before we disembarked.

Suddenly Vicky came flying down the stairs from the top deck, she had not realised the time. I gave Vicky her flight bag and she went off to get changed in the nearby toilets next to the restaurant. A few minutes later Vicky was back and dressed in her travelling clothes and had a very puzzled look on her face.

Vicky went onto say ‘the pockets in my shorts are not deep so whilst sitting down I put my cigs and lighter on the table because I didn’t want them to fall out, I had nothing in my pockets. When I realised the time I got up and put my cigs and lighter in my pocket and came down to you. I didn’t meet anyone on the way as I was alone on the top deck; everyone else had already left the ship

When I went there this morning. I came, got my clothes and went into the toilets to get changed. When I put my hand into my pocket to remove my cigs and lighter I felt something fluffy and I pulled this out. It was on top of my lighter’.

Vicky then showed us a red pouch with the numbers 416 on it, (our cabin number), written on it in blue biro. Inside the pouch was a silver Cartouche with hieroglyphics on it. Vicky had no idea how it got into her pocket. We asked Vicky had she spoken to any of the crew, but she had only talked to

Barman when asking for a drink. Celia and I were puzzled so we decided to go down to the ground floor. My friend Celia went into the jewellers and asked if her Cartouche was ready. She was told the item was ready but finding it was a different matter. The owner cousin could not find the bag anywhere.

He searched the draws for the small red pouch with the door number wrote on it. It had mysteriously vanished. Celia then turned to him and said’, is this what you are looking for” he could not believe it… he look puzzled’. How did you get that; I have not left the shop all morning? Celia told him what had happened to Vicky.

Celia came out and asked Vicky to go into the shop, she asked him if he had seen Vicky earlier, he said he had never seen her before and could not explain how the Cartouche had come to be in her pocket. We could not explain how this had occurred other than a possible apport. The man running the jewellers said that it must be magic!. So if you go on a Nile cruise and are on the MS Oddessy ask at the jewellers about the episode of the Cartouche that mysteriously appeared in a passengers pocket back in October 2007. 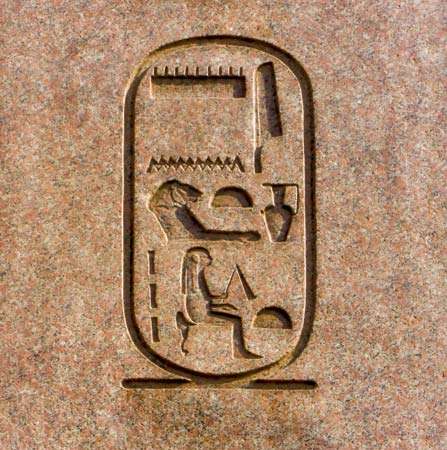 A Cartouche is an ancient Egyptian design, first known as a shen. The shen or Cartouche, dating back Some 5,000 years, is a hieroglyphic rope looped and tied at the bottom, forming a closed circle. The Encircling rope symbolizes eternity with no beginning or end, often enclosing a sun, indicating the King’s rule over the cosmos. The shen is seen in many ancient Egyptian artifacts, often grasped in The talons of various avian gods, hovering protectively over a ruling king.

Around the close of the 3rd Dynasty, (circa 2575 BC) Huni used a Cartouche to enclose his sovereign name. Over time the cartouche became vertically elongated to hold the cuneiform glyphs of longer royal names.

A double-Cartouche was sometimes used to display the royal name alongside the given, or birth name. Egyptians believed that writing down a name was important, or the soul risked being lost after death. This might explain why the Cartouche appears on many royal sarcophagi.

The Cartouche was such a powerful symbol that Tuthmosis III (1504 BC – 1450 BC) dictated his entire burial chamber, as discovered in the Valley of the Kings, be Cartouche- shaped, along with his sarcophagus.

Temple inscriptions from the Greco- Roman Period also show the Cartouche holding names of gods, Such as Osiris and Isis.

Today anyone can enjoy the royal blessing of a custom Cartouche with his or her name in hieroglyphics. A Cartouche can hang from a necklace, bracelet, or can be purchased as earrings. Custom Cartouches come in many styles in both gold and silver.

Some websites that sell Cartouches will translate names into hieroglyphics so the customer can See what it will look like in glyphs before ordering. Long names may have to be shortened, as most Cartouches are limited to about six glyphs. A short name, such as “Jan” or “Bob” can be augmented with an ankh or other symbol. A custom Cartouche can be a unique and interesting gift, carrying with it a royal and rich history.