Skip to content
Home→History, Mythology and Folklore→The Dark Side of Oz

The Dark Side of Oz

The author of this article is Mark Rosney. Sadly Mark passed away several years ago. Mark was a fantastic person, always doing for others. I was invited by Mark on several occasions to give talks at conferences he and two friends – Mike Jaega and Janette Fleming. Again, sadly two other fantastic people who are also no longer with us.

I first published this article in another magazine which I was Sub-Editor of and came upon it whilst sorting emails. Its not archaeology or Metal Detecting, but it is history and fits perfectly into our Mythology and Folklore section.

I publish this in honour and memory of Mark, Mike and Jannette.

For many years the mythology and folklore of popular culture have lead us to think of some amazing synchronicities and connections between the film the Wizard of Oz and Pink Floyd’s Dark Side of the Moon album. Is this factual or just a simple coincidence. Mark Rosney looks deeper.

In the insane world of Rock ‘n’ Roll, there are plenty of rumours flying around about hidden meanings in songs, from the supposed satanic messages contained in Heavy Metal albums to the subtle drug taking references found on some Beatles songs. However, none of these are as big, or as widespread as the rumours going around about the spooky connections between an iconic album and an equally iconic movie……

Pink Floyd fans across the world are literally buzzing about the amazing coincidences that leap off the screen when you play ‘The Dark Side of the Moon’ as the soundtrack to ’The Wizard of Oz’.

There are hundreds of websites dedicated to the ‘spooky synchronisations’ that people claim happen between the lyrics, music and what appears on screen. It seems that the world and their dog have tried it, and many have been ‘blown away’ by the results.

How does it work?

For people interested in the real truth behind urban myths, this is the opportunity of a lifetime: an urban myth, or a music conspiracy theory if you like, that anyone can try out for themselves.

All you need is a copy of the original 1939 film and a CD of the album. Start the CD player and immediately hit pause. Start the movie, turning the sound down and wait for the MGM lion. Immediately after the third roar, take the pause off the CD. Sit back, watch and listen.

What do you see?

Among the many coincidences claimed on the websites, the following are considered to be really startling:

The Wicked Witch, in human form, first appears on her bike as the cacophony of alarm bells ring out at the start of the track ‘Time’.

During the track ‘Time’, Dorothy breaks into a trot to the line “no one told you when to run”

When Dorothy leaves the fortune teller to go back to her farm the band are singing “home, home again”

Glinda, the Good Witch of the North appears during the song ‘Money’ as the band sing “don’t give me that do goody good bullsh*t”

A few minutes later, the good witch confronts the wicked witch as the band sings “and who knows which is which?” (witch is witch)

The song ‘Brain Damage’ starts just as the Scarecrow launches into his song “If I only had a brain”.

As Floyd sings “the lunatic is on the grass” the scarecrow begins his dance routine near a green lawn. 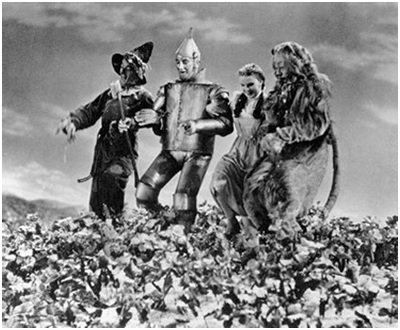 Got to keep the loonies on the path. Dorothy and Co.

The line “got to keep the loonies on the path” comes just before Dorothy and the Scarecrow start skipping down the Yellow Brick Road.

And there are many, many more. However, it is not only lyrical coincidences… Apparently songs end when scenes switch, and even the Munchkin’s dance appears to be perfectly choreographed to the song ‘Us and Them’.

However, the most startling synchronisation is when Claire Torry’s powerful wordless vocal solo in ‘The great gig in the sky’ rises and falls in perfect time to the tornado scene.

And that’s not all! The films transition from black and white to colour, when Dorothy opens the door to the magical kingdom of Oz, is heralded by Got to keep the loonies on the path? Dorothy & co. en-route to see the Wizard on the subject. Unfortunately the sound of cash registers at the start of the track ‘Money’. Real fanatics are also quick to point out that side one of the vinyl version of the album is the exact length of the black and white portion of the film. And, of course, there is the famous cover…..a single beam of white light on a black background entering a prism, only to emerge on the other side as a rainbow, which many interpret as a symbolic representation of the black and white to colour transition of the film, not to mention Judy Garland’s classic song ‘Somewhere over the rainbow’.

The clincher for most people comes right at the end of the album as it tails out to the sound of a beating heart. At the same instant Dorothy presses her head against the Tin Man’s chest listening for a heartbeat!

Spooky coincidence? Some say ‘No, not a coincidence. It was planned’. 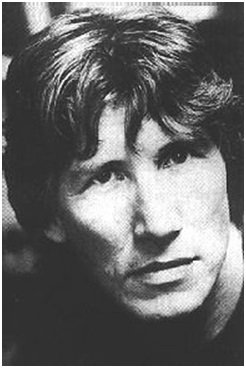 So, has someone unwittingly stumbled onto the secret meaning behind the most enigmatic album of the 20th century? Fans certainly think so. But what does the band have to say on the matter?

Floyd keyboardist Richard Wright, when interviewed on US radio, denied all knowledge of it, saying that if it was intentional he had not been party to it.

In a recent article in ‘Guitarist’ magazine, Dave Gilmore, legendary lead guitarist with the band, had only one word to say on the subject. Unfortunately that word is not repeatable here! Such denials, however, are met with disbelief by the Oz-Floyd theorists, who cite the sheer number of ‘coincidences’ between film and album as concrete proof that the latter was modelled on the former.

In particular, one fan, Deejay George Taylor Morris, is convinced that ex Floyd frontman Roger Waters planned the whole thing in secret without telling the rest of the band. “It’s too close. Look at the song titles. Look at the cover. There’s something going on there”.

As theories go, this is an interesting one, but for it to be true presents too many problems.

Firstly, there is the issue of timing. To make music match up perfectly with film requires careful timing of scenes. Back in 1973 when the album was being recorded, the only way to do this would have been to screen the film itself and play the music alongside it to ensure a perfect match. This would have entailed obtaining the original movie and a projector, and to have it in the studio during the making of the album. So the theory of keeping all of this from your fellow band members is really stretching things a little.

Of course, it might have been slightly more feasible if Roger Waters had written all the music, as he could have seen screenings in private and made a list of timings, but unfortunately the album was very much a band effort. There is no way that Roger could have subtly influenced his band mates to write songs to specific lengths, suggest lyrics and tie-in sound effects, especially if he wasn’t letting them in on the secret.

Anyhow, let’s assume that Roger successfully kept his master-plan secret and managed to get over the hurdles of timing, synching the music to the image and ensuring that the final cut of the album matched the problem arises when a movie is transferred to film perfectly. Are there still problems? Yes!

Way back in 1973 there were only three album formats available: Vinyl LP, Compact Cassette and 8-Track tape cartridges. The first two, as pre-CD generation people will remember, have to be turned over in order to play the second side. A very important fact considering most of the ‘amazing synchronisations’ occur on music that was originally on side 2 of the album. This would necessitate stopping the LP, turning the record over, re cueing the needle and being able to ‘hit’ the first sound on the first track in EXACTLY 2 seconds (which is the time delay between tracks on a CD version) in order for the synchronisations to flow in the way the Oz-Floyd theorists say they do. No mean feat! Cassette tape also has it’s problems, as now you not only have to turn the tape over, you have to contend with the pesky leader tape, which has a run in time of about 4 seconds.

8-track, however, is a little different. These tapes play continuously in an infinite loop, so it is possible that in this format the synchronisations would be easier to achieve. But again, it would necessitate taking your bulky 8 track tape deck, amplifier and speakers to your local cinema to get the effect. And you’d have to ask the projectionist to run the film without sound. Hardly worth the effort really!

Which leads us back again to the biggest problem…timing.

Not a lot of people know this, but there is a time difference between the length of a cinema movie and it’s Video or DVD version. This is caused by the fact that cinema movies are projected at 24 frames per second. That is, 24 full images are projected off the film onto the screen every second. All well and good, but a problem arises when a movie is transferred to video or DVD

Because of the speed at which (UK) Televisions cycle (50 times per second), TV screens consequently show 25 full images per second. In short, if you played a movie on the TV without doing anything to it beforehand, you end up with a gap that lasts 1/25th of a second, every second. This would produce an irritating flicker that would be very annoying to watch.

The way round this problem is to speed up the original film a little so that 25 images are displayed every second. The result: smooth flowing images, no annoying flicker…..and a reduction in the film’s length by 4%.

So, if Roger Waters had managed to get the music in perfect synch with the original movie, the minute the movie is transferred to Video and DVD means that the music would no longer synch up. This makes the claim that the ‘synchronisations were intentional’ school of thought all the more silly. I’m sure there are a few die hard theorists that will say Roger Waters is such a genius that he anticipated the arrival of the new technology (home Video Cassette Recorders and CD’s were not around in 1973!) and made adjustments accordingly, but I think that this is really pushing the belief boat way out past the point of no return. 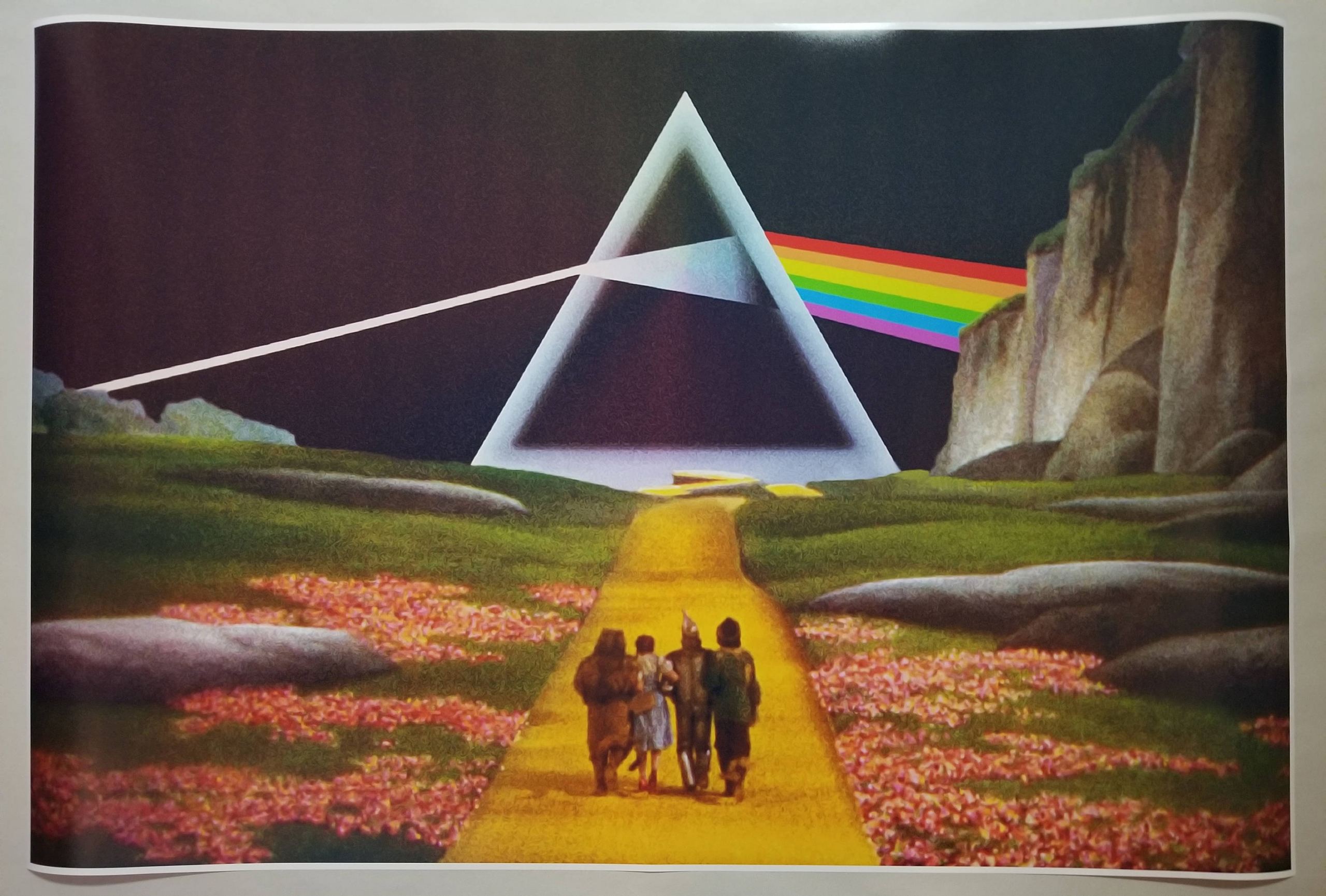 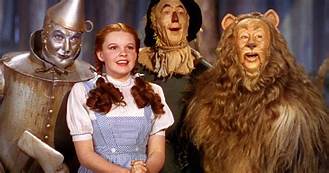 So, is ‘The Wizard of Oz’ the hidden message behind one of the most popular albums of all time? I don’t really think so. But the weird way that the music does               to synch up to the movie is intriguing. However, under closer scrutiny, most of the cited links are, at best, tenuous. One synch however, the tornado scene, with ‘the great gig in the sky’ as soundtrack, is uncanny!

Is it all just a weird coincidence then? Almost certainly! The laws of chance do allow for this sort of thing to happen. But does this tell us anything about the nature of the cosmos? Not really, but it does tell us that there are a lot of people out there with far too much time on their hands!

Try it for yourself!

How to synch up the album and the movie.

Or. Sit back and watch the following version from YouTube.