In a new feature each month, the Archaeology and Metal Detecting Magazine will be giving a prominent detectorist the chance to answer the question ‘Why I love digging’ in their own words.

Up first is Kimmie Price, AKA Siren Kimmie from Girls Rock Metal Detecting

It was a normal spring day in North Carolina. A bit on the warm side, sun shining, birds twittering, bugs buzzing. She crouched over the hole with her pin pointer, attempting to locate her next target. Hair clings to an already damp forehead as she brushes the sand from her backside. Metal detecting is not the most lady-like of hobbies to be sure, but she was in her element. For as long as she could remember she loved having her hands in the soil. As a child she had buried her fair share of Hot Wheels and now enjoys puttering in the garden, planting flowers and tending the landscape—in addition to her favourite hobby—metal detecting! The smell of dirt, fresh air, and pine trees are a comfort. There is a calm spiritual connection to being outdoors; she looks at nature as her church. Never does she feel so at home as when she is picking her way through thorn abundant woods or padding alongside a creek bed hoping for a decent signal that will uncover a piece of history. She jokes of feeling like a wood nymph, sprightly flitting through the trees, sliding down hills and splashing through streams.

Mindless of her dishevelled and dirt-covered appearance, she continues to probe for the target. Only slightly distracted as she slaps at a mosquito dining on the fresh patch of skin now revealed at her lower back while bent over intently searching. Her mind races, pondering what could be giving such a great signal. But she’s been fooled by those pesky ring pulls and soda pop tops so many times she’s lost count. Many have given up the hobby out of sheer frustration over that very thing. “This is hard work. You have to dig a lot of junk to find the treasures!” she always says.

Some locations are trashy and some have very few signals, but they all have potential. This spot was no different. It had given up some buttons and bullets along with a bucket full of nails, aluminium and scrap iron. Hugging up close to a chain link fence with her At Pro and that 5×8 coil, she was just able to eke out the high tone hiding there. With pin pointer wailing she knew she was on the target and saw a quick glint of silver-toned metal. The edge of the find revealed itself causing as a rush of excitement that generated through her entire body. It was round! Round could mean a coin, or even a token! Pulling the target from the ground, she was not prepared for what she saw. Not only was it silver, but it was old silver!

There isn’t a detectorist alive who would not get excited over a silver coin–Not a sane person anyway– and she was no different. While her love of history sets her smack-dab in the relic hunter category, she’s not immune to the beauty of even modern silver and gold coming out of the ground. But finding old coins is something that certainly piques her interest. Finding her oldest coin to date? Now that had her very excited.

“Oh my God.” She stated flatly, still not believing what she was holding in her hand.

Her dig mates came over to investigate as she repeated herself more loudly,

“Oh my GOD! I cannot believe what I just found!”

At first she held the coin in a tight fist, not wanting to open her hand for fear it wasn’t real. Her entire body was buzzing with excitement. She slowly opened her hand revealing the coin,

“Tell me I just found a seated dime…” 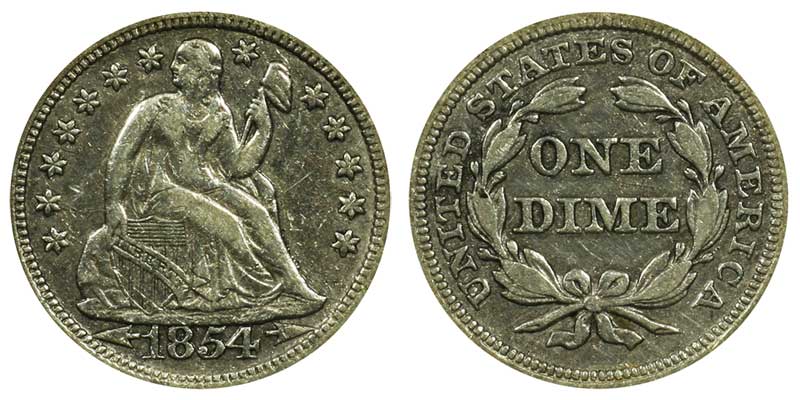 Now there are two schools of thought when it comes to drilled coins like the one she had found. Collectors tend to cringe over the “damage” and “devaluing” brought on by the hole. And in the weeks to follow she would hear apology after apology that the coin was “ruined”. However, her love of history meant she looked at it from a whole different angle. For her, this was a personal item. It belonged to someone from the past which gives her a connection that cannot be compared in any monetary fashion.

The value of this coin, for her anyway, rested in the knowledge that it was found in a civil war camp. The possibility that it may have been worn by a solider cannot be denied. She immediately began to imagine a battle weary young man tying the coin on his leg–which was often done for safe keeping. He must have been so upset having realized he lost it. Ten cents was a lot of money back then! And to imagine it sat there in the ground, over one-hundred and fifty years, just waiting to be found! A small token…a remembrance of its previous owner.

When asked what she loves so much about metal detecting, it’s easy to cite the obvious: A love of history, being out in nature, the potential of finding something grand… But the real passion that drives her is the intangible things. The connection to those from the past through each button, brooch, buckle or bullet dug from the ground. This coupled with the history learned, the individuals encountered, and the moments experienced along the way; this is what fuels her hunger for the hunt.

As to what became of that lovely drilled dime, much like before, it is now worn in a locket around her neck as a treasured item—a reminder of the original owner, and a memorial to her dig partner who was with her that day, but has since passed on. She feels honoured to be the current caretaker of the coin and hopes someone will cherish it long after she’s gone. You see her love of metal detecting isn’t in the treasures it produces, it’s in the tales and the legacy that lives through each new find. That’s where the magic happens!

Thanks kindly to Kimmie for telling us why she loves digging. If you would like to answer the question, or include your finds or stories to Arch MD Mag, you can contact us at editor@archmdmag.com

To keep up to date with all our news, you can get our  free android app by clicking here.